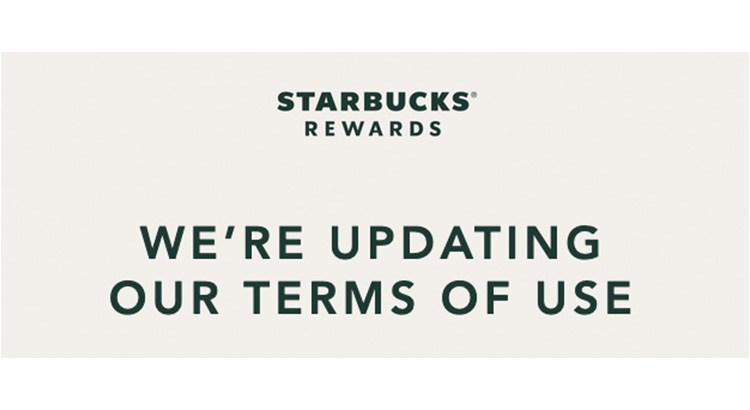 Hot on the heels of the changes to Tims Rewards, Starbucks Canada is changing the redemption rates for their Starbucks Rewards program. The communication of it is terrible – they simply sent out an email saying there are updates to their terms and conditions.

When you click on the link in the email this is what is presented:

In the email all they say is they are updating terms of use for reward redemption starting February. No where do they tell the members that the reward rates are changing. How many members will just ignore the email and delete it since it is so vague? Personally the email to me was in my Spam box but thanks to Paul M. on Twitter for alerting me and I decided to check there.  Updating terms of use could mean anything, plain and simple the email should state that Redemption rates for rewards are changing this February. That’s what matters the most to the members.

For the most part this is an insane devaluation just like we saw from Tims Rewards. The big difference here is Starbucks is not adjusting their earn rates. With Tim’s changes low spenders lose out while high spenders actually gain. Not so with Starbucks. They are only adjusting the redemption rates at this time so all spenders lose out.

That basic coffee, tea or bakery item is seeing a 100% increase in this update! That’s right a doubling of the current 50 points to 100 points. That’s an insane change. You go from having to spend $25 to $50. This 50 Star category was the best redemption option in the program but now it has been brought closer to the other redemption options with a value of around 3.5 cents per Star. The only consolation here is they have now added iced brewed coffee or iced brewed tea into the 100 Stars category.

The next category of rewards is for handcrafted drinks and hot breakfast sandwiches. It is seeing a 33.3% increase from 150 Stars to 200 Stars. The deval continues as you now have to spend $100 instead of $75 for this type of reward. If you consider an average of around $6 for the items in this category you are looking at a value of around 3 cents per Star.
The third category is the 300 Star level. This is where the lunch sandwiches and protein boxes fall into. Lunch sandwiches are currently 250 Stars so we see a 20% increase in cost here for those items.

The only real good news out of the changes sees at home packaged coffee become more affordable in the program. The whole bean or other packages of coffee see a significant drop of 25% from 400 Stars to 300 Stars. At 300 Stars for an item that is roughly $19 this is the best redemption option in the program now with a value of over 6 cents per Star.

Quick comparison of spending required for a free coffee

I don’t know if Starbucks had this planned prior to seeing Tims changes or if they are just following suit but either way coffee and tea drinkers are seeing two of three major coffee chains woefully taking value from them. McDonald’s had already done so earlier in the year when they got rid of the cup stickers but now they find themselves back on top thanks to these other changes.

To conclude I would recommend using up as many Stars as possible before that date to ensure you get the most value of them especially if you can make it happen at the 50 Star level(Hopefully Aeroplan does post those bonus Stars quick enough for those who converted). Of course, if you are someone who buys the take home packaged coffee you’ll want to wait if you can to redeem on or after February 13.