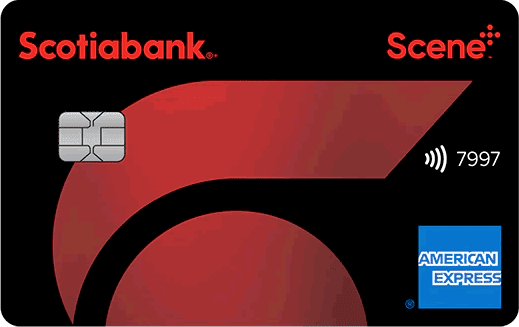 The Scotiabank American Express card has been a simple 1 point per
dollar (1% return towards travel) card since its inception and now it has
becoming richer in this category. As of July 1 the card now earns 2
Scene+ Points per dollar spent on grocery, dining and entertainment,
gas, daily transit and select streaming services. This is big, as that’s
a 2% return and there are very few no annual fee cards that provide a
return like this on those categories. There is an annual cap of $50,000
on those categories which is a healthy limit for this type of card.

As of October 1, the card will get an additional boost of earning 3 Scene+ points for each dollar spent on all eligible purchases
at Sobeys, IGA, Safeway, Foodland, FreshCo, Voilà by Sobeys, Voilà by
IGA, Voilà by Safeway, Chalo! FreshCo, Thrifty Foods, IGA West, Les
Marchés Tradition, Rachelle Béry and Co-Op.

All
other spending on the card remains at 1 point per dollar. What we have here
now is a no annual fee card with a 1 to 2% return when redeeming for
travel, dining and soon enough groceries as the Scene+ redemption rate for groceries at Empire Company Limited stores will be 1,000 points to $10.

The
next change to the card has been the addition of Mobile Device
Insurance. You will now get coverage for new mobile devices that you buy
on the card on or after July 1, 2022. However this card was one of the few no annual fee cards to offer a very attractive travel insurance coverage package and that was removed as of July 1.

It is unfortunate that it lost its travel insurance package but I feel
like Scotia is positioning this card as an ‘additional’ card in people’s
wallets who have a strong insurance card like the Scotiabank Passport Visa Infinite card as their primary card and then have the Red card filling the Amex spot in their wallet.

What else does the card feature

The
card retains purchase security and extended warranty coverage in its insurance package. As it is an American Express card it also has access to American Express Experiences (Front of the Line etc.) and Amex Offers.

The Scotiabank American Express Card has become one of the strongest earning no annual fee
travel rewards cards in Canada. If you are looking for a no fee option to fill the American Express slot in your wallet and don’t require the airline or hotel conversion options of Amex’s own Green Card, then this is the card to get.

Learn more about and apply for the Scotiabank American Express card here.

This
post was sponsored by Scotiabank. The views and opinions expressed in
this article, however, are purely those of Rewards Canada.