This month’s Air France KLM Flying Blue’s Promo Rewards once again feature
cities in Canada. This is now the fifth month in a row and this month although this month we see fewer cities on tap.  Just like the past few months the discount is 25% off
economy class reward flights.

If
you are unfamiliar with Flying Blue Promo Rewards, they are a limited
time offer that sees flight rewards discounted by 20 to 50% for select
flights on Air France and KLM (sometimes even Kenya Airways) and those
discounts can be for economy class, premium economy class and even
business class. The best deals by far are when they offer 50% off
business class, which we have seen many times from Canada however for
this month we only see 25% off economy class redemption options from Montreal, Toronto & Vancouver.

With
25% off Economy this can be a good deal but of course it’s not like the
50% off Business Class rewards! The reason for this is Flying Blue
tends to have high taxes and fees on top of the miles required for
reward flights. When you are looking at
nearly $300 in fees alone between Montreal and Paris or over $500 in
fees for Calgary to Rome you may be better off saving the miles and just
buying those economy class tickets outright with cash. If you do
however find an economy class redemption on a date where the cash prices
are high then by all means redeem as your per cents per mile value may
be !

Here are the details of this month’s Canadian offers: 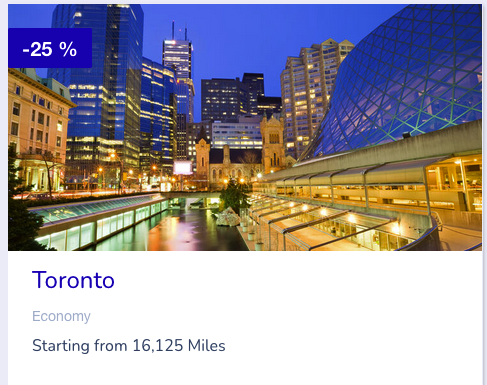 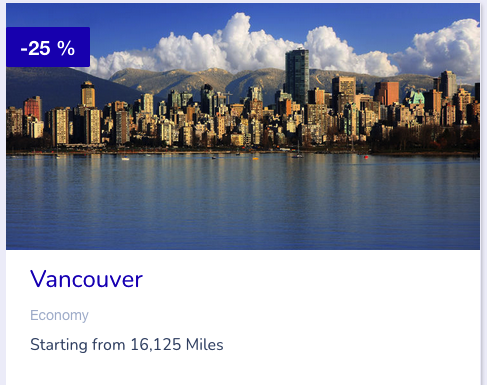 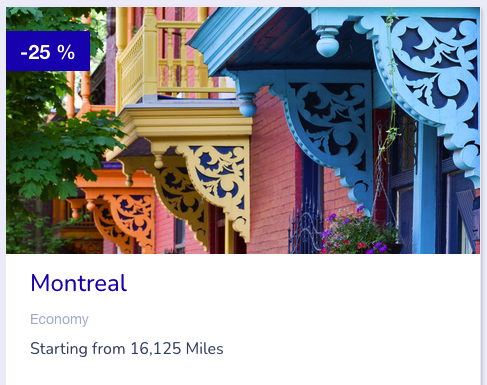 January Promo Rewards – Save 20%
to 50% on the Award Miles usually required for an award ticket.
Destinations vary by each promotional period. Click here for more details  Book by Jan 31, 22 for travel until Jun 30, 22

In
Canada there are a few ways to earn Flying Blue Miles outside of flying
with Air France KLM and their partners and that is with American
Express credit cards. Cards like the Cobalt Card and the Platinum Card‘s points (just
to name a few) have points that can be converted directly to Flying Blue at a 1
Membership Reward point to 0.75 Flying Blue Miles ratio. Yes that’s not
as attractive ratio as Aeroplan or British Airways which happen to be 1:1
however when you take into account these Promo Rewards that difference
can be quickly eroded and in fact can be better with these Promo Rewards. Another option as well is the Marriott Bonvoy™ American Express® Card as
Marriott Bonvoy points can be converted to the Flying Blue program.

Even
though 25% off
economy class rewards may not be the best deal you can get it may just be the
right choice for some of you!
We are still hoping to see the
return of some 50% off business class offers in the near future, the
first step was actually seeing a business class offer on the list time!
It still surprises me that with travel numbers still not anywhere
near what they used to be that we aren’t seeing business class options
with Promo Rewards. Anyways… if
anything you can use this
post as a reminder to start planning for those future business class
flight reward flights on Air France or KLM. As we said earlier, the best
way to earn those Flying Blue miles here in Canada is now with an American Express card that earns Membership Rewards points.