This news was expected for August but it appears that it has come early and that is the ability to redeem Alaska Airlines Mileage Plan miles for flights on Qatar Airways. Although both airlines are part of the oneworld Alliance this partnership was done separately from Alaska Airlines adding in all the oneworld partners so you won’t see some of the other oneworld airlines as part of the Mileage Plan redemption pool just yet.

When you go to Alaska’s site and choose to search for flight using miles you’ll now see that Qatar Airways flights show up as an option. For Canadians this is ideal for Qatar Airways’ Montreal to Doha route and for connections beyond Doha as that is Qatar’s only Canadian route at this time. However you can also fly Alaska Airlines out of Western Canada and connect to Qatar Airways flights out of the U.S.. The routings weren’t ideal when I searched Vancouver to Doha – almost all random dates I looked at had Vancouver-Portland-San Francisco-Doha with an overnight in SFO. This could be in part to Alaska’s reduced frequencies for flights to Canada which will hopefully be increased in the near future.

As you can see they are pricing awards dynamically as they start at 42,500 miles one way in Economy from North America to Doha and 85,000 miles one way for business class. These are the same amounts you’ll find for the middle east, Indian sub-continent, North Africa and the much sought after Madlives. Flights to the rest of Africa start at 50,000 miles for economy and 120,000 for business class.

Here are some of the numbers in action:

Showing the lowest redemption levels here and you’ll notice right away the fees are great – they are no carrier surcharges on Qatar Airways so you have a very reasonable US$68 on these flights. 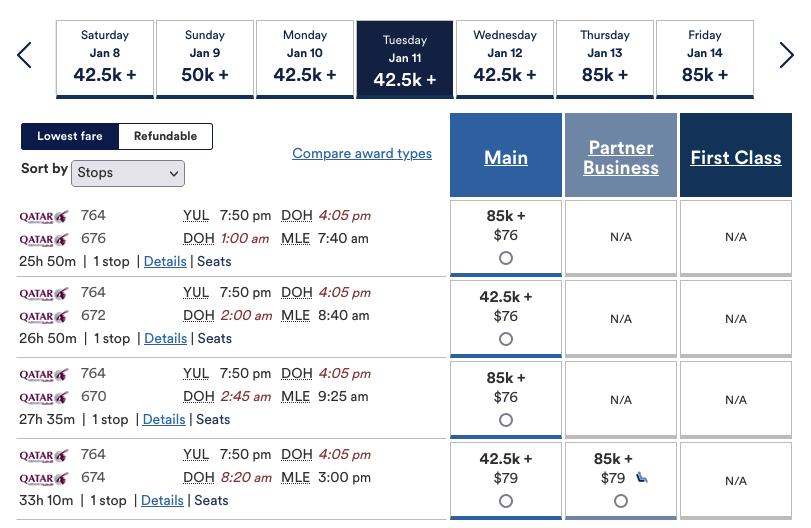 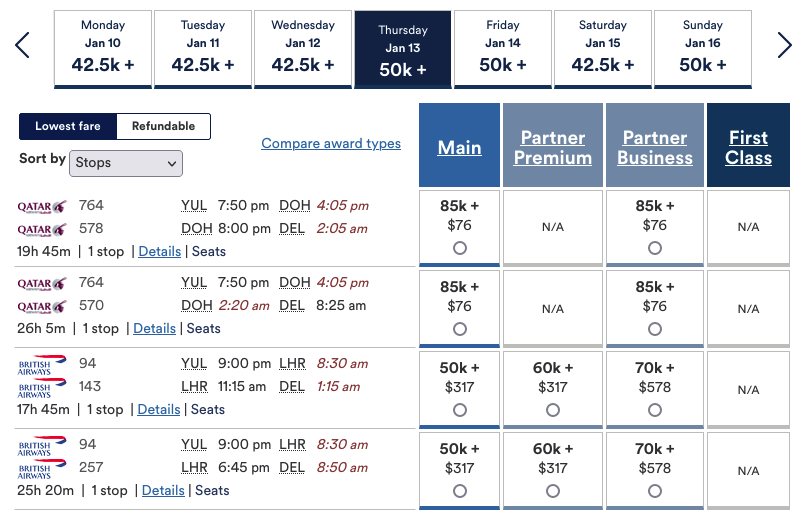 Same thing here only 85,000 for business class but you’ll see the
dynamic pricing in effect for economy class  and in this case why even
bother with economy? 😉 I also left in the other options to fly on
British Airways who does pass along surcharges to Alaska! So BA is
15,000 miles less but US$502 more in fees! Ouch! 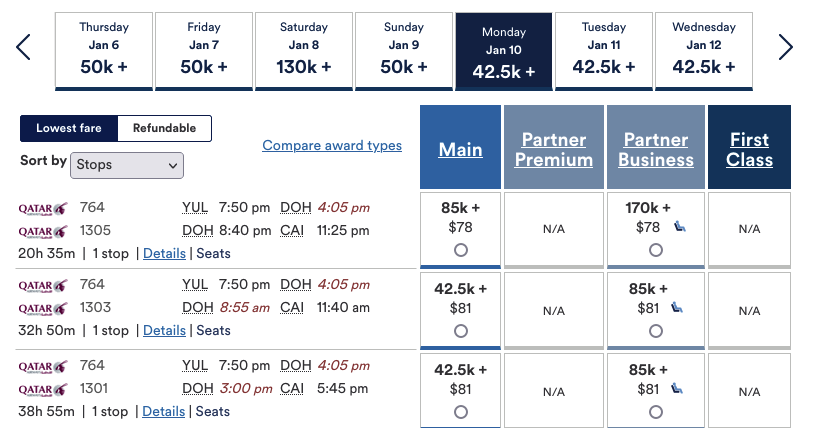 Again some base level and dynamic amounts to be found here!

For Canadians Alaska Airlines Mileage Plan has always been somewhat of a hidden gem – well not really hidden, but a gem for flying in premium cabins on some of the world’s best airlines. And now with the addition of Qatar Airways there is one more great option. The base redemption rates for the Middle East and Indian subcontinent are decent given the quality of service and the cabins on Qatar Airways. Some of the other areas however you may be better off redeeming on Alaska’s other partner airlines.