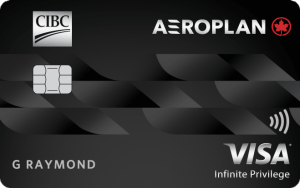 And links to the other consumer card offers revealed today:

The
limited time welcome bonus revealed today for the new CIBC Aeroplan® Visa Infinite Privilege* Card is pretty shoddy for an ultra premium card. Sure it has the buddy pass but only 20,000 Aeroplan points? I mean come on CIBC – I know you are not the primary card partner anymore and are putting more money behind your other products but that’s it for a $599 a year card? Here’s what this card offers as its welcome bonus:

The
Air Canada Buddy Pass is a companion pass that you can use to get a $0
base fare on any Air Canada, Air Canada Express or Air Canada Rouge
flight in North America including Hawaii and Mexico. You receive the
pass once you spend $1,000 on the card within 90 days of opening your
account. The buddy pass is good for travel in economy class (in any economy class – Standard, Flex, Comfort, or Latitude​)
so when you buy a ticket you can redeem the pass to have someone fly
with you and you only have to pay the taxes and fees on that second
ticket. The pass is valid for 12 months from date of issuance. This is
where the potential big value comes in, if you are planning on traveling
in North America, to Hawaii or Mexico and will be traveling with at
least one companion you can enjoy some big savings, especially so if you
buy the higher end economy class fare levels and as the buddy pass has
no black out date it can be used during peak season albeit peak season
in 2021 won’t be anything like pre-COVID times. 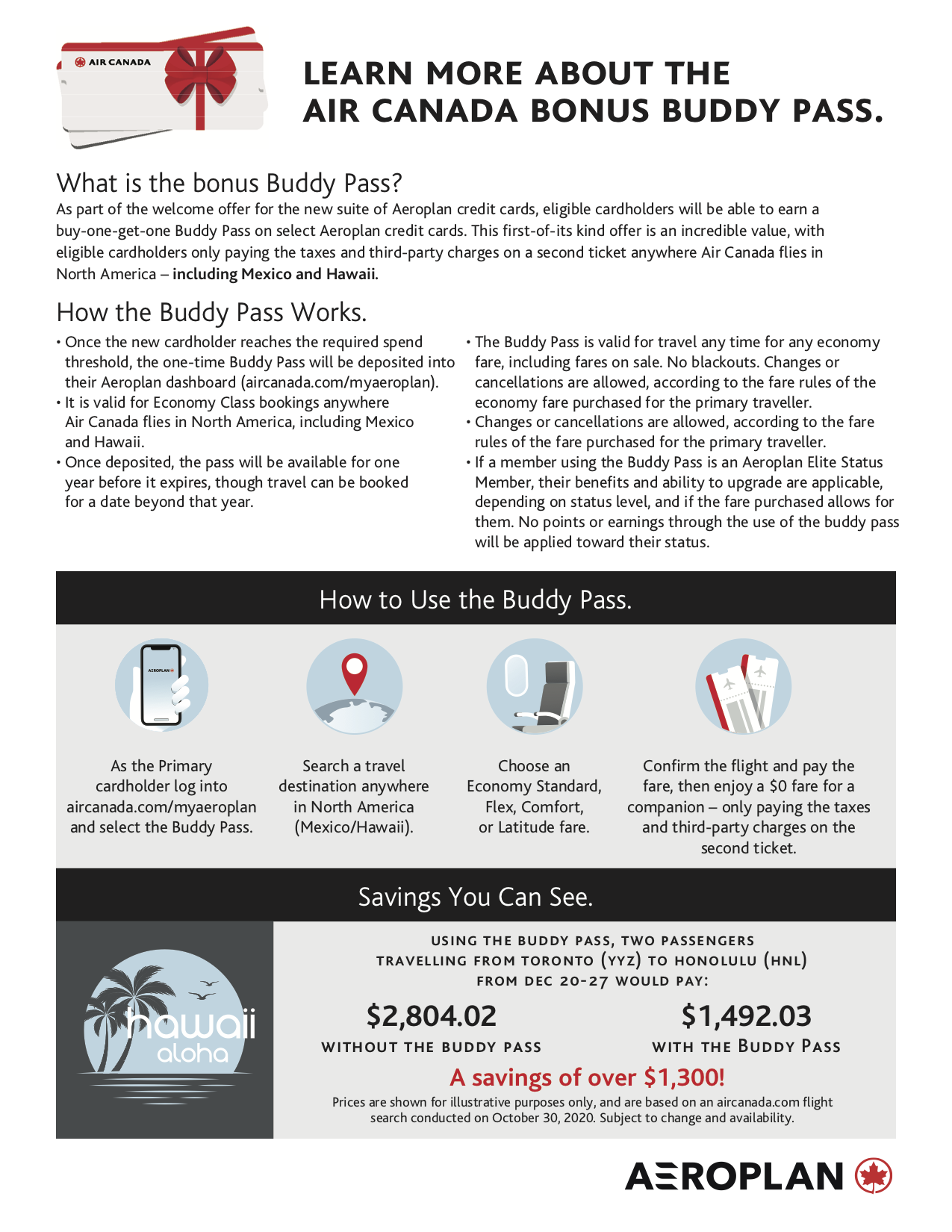 Here are a few examples of using the Buddy Pass for travel in early 2021: 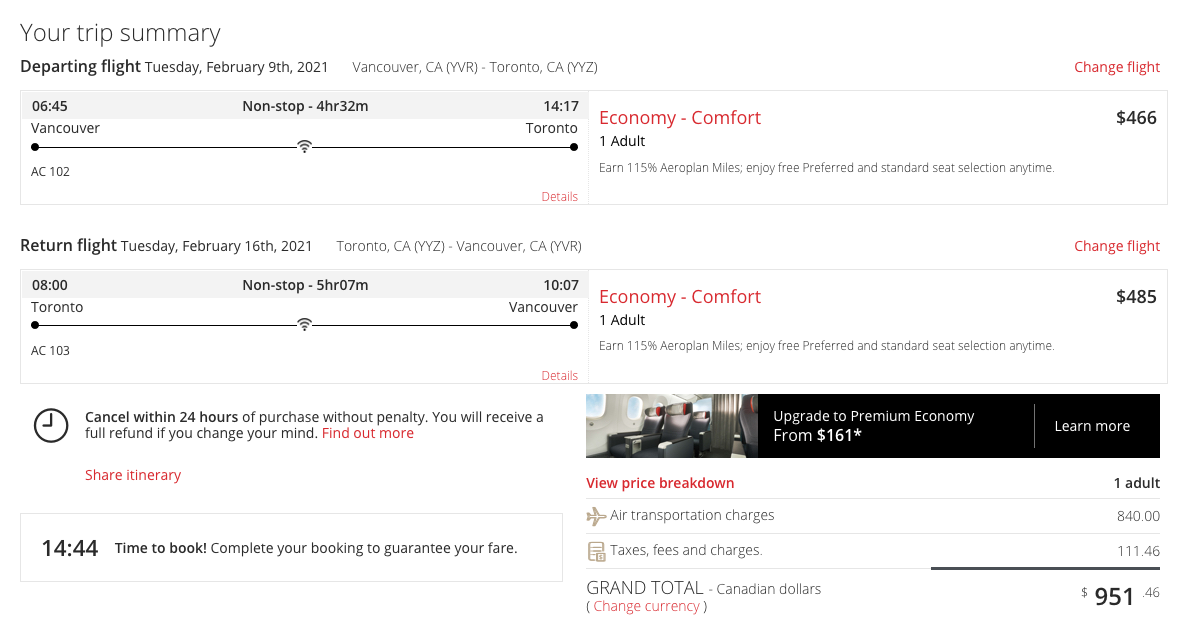 The
base fare is $840 per adult for the highest Economy Fare Class
(Comfort) which means the buddy pass will save you $840! Combine this
with our minimum valuation of Aeroplan points at 1.2 cents each and the
welcome bonus for this card becomes $481 in value – the lowest out of all the cards offering the buddy pass. If you chose to go
with the lowest Economy Class fare (Standard) the base fare is $290 per
adult so the value of the buddy pass drops which now gives you a -$69 value – ouch. 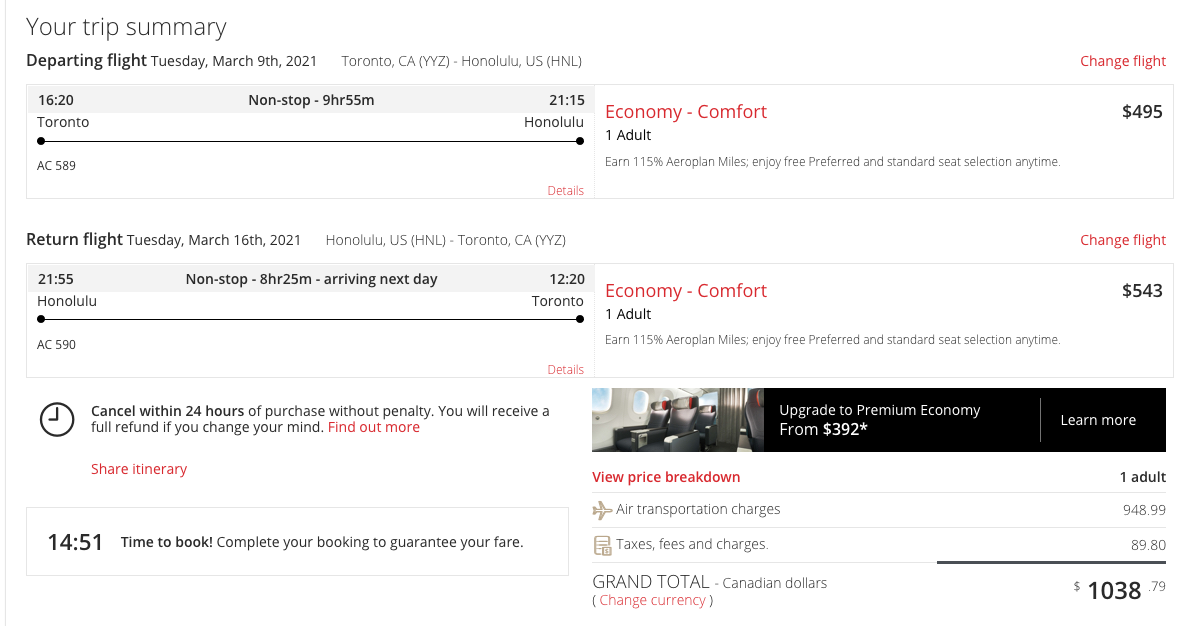 The
base fare is $949 per adult for the highest Economy Fare Class
(Comfort) which means the buddy pass will save you $949. Combine this

with our minimum valuation of Aeroplan points at 1.2 cents each and the
welcome bonus for this card becomes $590  value. If you chose to go
even higher and purchase a Latitude fare on this same flight the base
fare is $1633 per
adult so the value of the buddy pass is huge at $1633!! 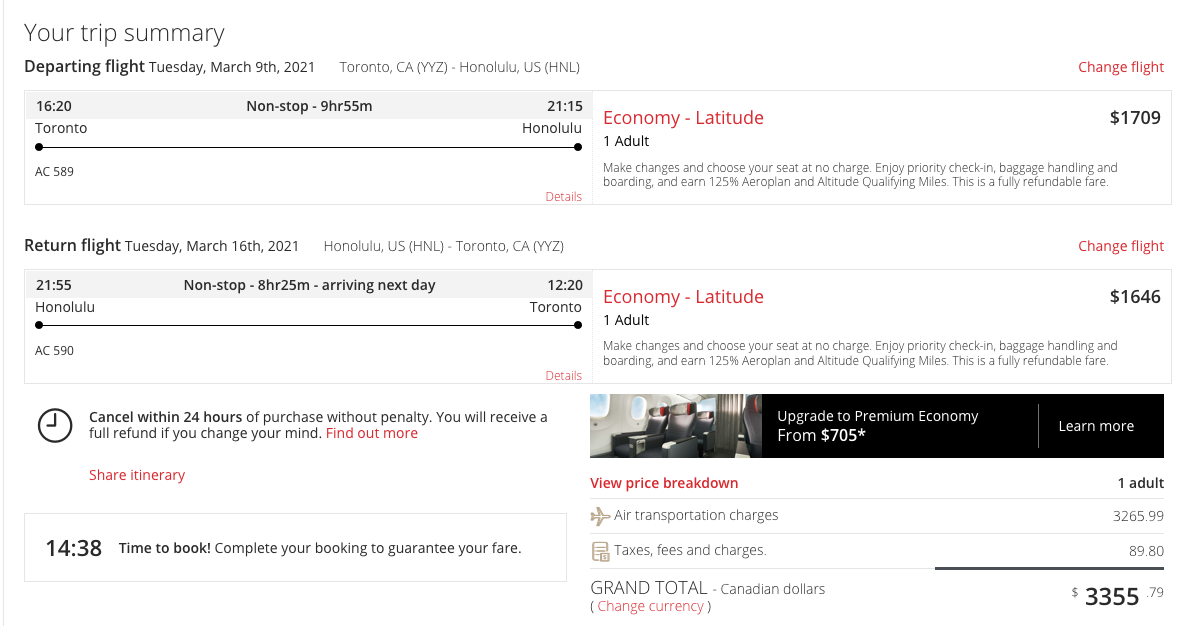 That
is a huge value for those who do buy Latitude fares but for most
Canadians I think the buddy pass will be mostly used on those Standard
to Comfort fares.

For the most part I would value the
Buddy Pass at no less than $100 based on redeeming it for some shorter
competitive routes like Toronto-Montreal or Vancouver-Calgary. For
example here’s a really cheap fare between YYZ and YUL where the Buddy
Pass would only be worth $112: 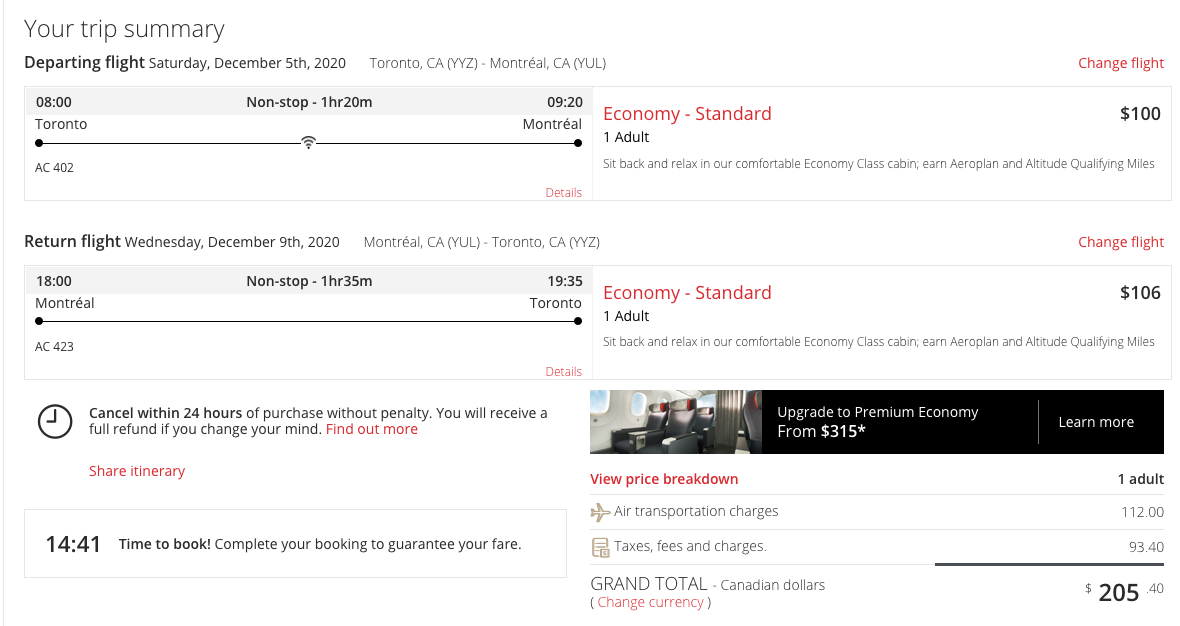 Basics of the new card

Like it’s TD counterpart the primary card annual
fee is being increased to $599 from $399 however this card’s additional
card fees will only jump to $149 from $99. The main reason this card
doesn’t see the additional card increase is that it’s
NEXUS benefit isn’t as valuable as it is only available for the primary
card and it appears, based on CIBC’s terms the one guest you can bring
in to Maple Leaf lounges is only good for the first year of having the
card.

Also new to the card are the following benefits:

Why a buddy pass instead of more points?

There
are several reasons why Air Canada is doing this and I do get why they
have chosen to go this route. The first is breakage – this is a term
loyalty programs love and it is where miles, points, vouchers, bonus
gift cards or in this case buddy passes go unused and they expire. Hotel
chains like Best Western are famous for this – they rather award
limited time gift cards over points since the latter never expire. It
allows loyalty companies an easy way to get rid of that debt. And here
in Air Canada Aeroplan’s case they know travel is severely curtailed
right now and by not offering as many points as the welcome bonus and
instead providing a buddy pass that has a concrete end date Air Canada
is truly hoping a lot of them go unused. Even if the customer at the
time of application has full intentions of travelling there is no
guarantee they will be able to if more travel restrictions are put in
place, the traveller becomes sick themselves and so on. So that’s the
first reason Air Canada has done this – it will cost them a lot less
than issuing tons of points that people will hold onto for a couple of
years. The second reason is to boost revenue. There are people who will
travel who may not have before if they didn’t have this buddy pass. So
for Air Canada this means a boost in revenue – sure you are giving up
two seats for the price of one but that’s better than none. Planes
aren’t flying anywhere near capacity right now so if this buddy pass can
entice someone to get out of their house to take a trip then they will
do so on Air Canada instead of WestJet or any other airlines and that’s a
win for Air Canada. The third reason they have gone the buddy pass
route is they want the cardholders to be able to experience the benefits
that come with card such as the first bag free benefit.

This
card’s welcome bonus is probably the weakest of the entire suite of Aeroplan cards – if people are doing their research they’ll realize there is no point in getting it because of the other offers that is unless they have their heart set on keeping all their banking products with CIBC.