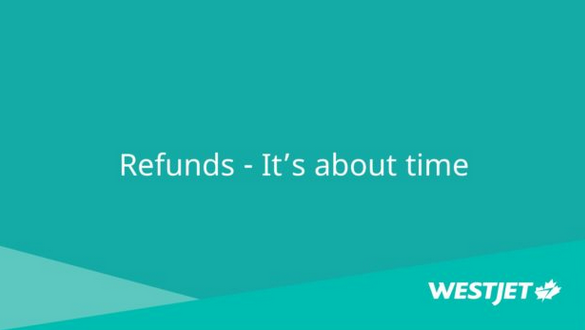 The events of yesterday afternoon and evening played out quite interestingly for the airline industry in Canada, namely on Twitter. Around 3:30pm MT WestJet came out with a news release stating they were the “first national carrier in Canada to voluntarily provide refunds to original form of payment” to which that statement was quickly challenged by Air Canada and then just as quickly rebutted by WestJet: 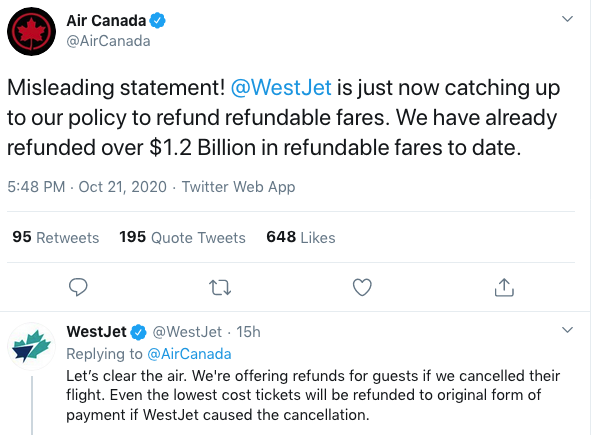 And the fight was on! It garnered a lot of attention from consumers and the media but this has to be my favourite tweet had to be this one from Richard Southern of 680 News: 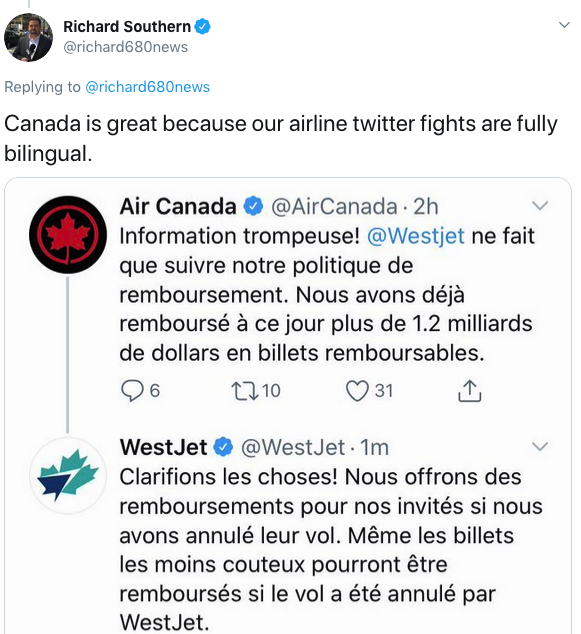 Both airlines weren’t right or wrong here. Yes Air Canada has refunded refundable fares but that’s a given as they are refundable – doesn’t matter if there was a pandemic or not. I’m sure WestJet refunded a healthy amount of their PremiumFlex and BusinessFlex fares that were refundable. It’s all the other non-refundable fares which make up the majority of tickets held by consumers that haven’t been refunded by Air Canada at all during this pandemic and for the most part it was the same with WestJet. However shortly into the pandemic WestJet did start refunding non-refundable flights between the Canada and the U.S. or the U.K. (read my experience on getting US flights refunded  here) Air Canada did start refunding some Europe flights but only those that originated in Europe – not for those leaving for Canada.

Then fast forward to yesterday afternoon and the breaking news comes out that WestJet will begin offering more refunds. I’m not a huge fan of the way they worded their release as the first national carrier to voluntarily offer refunds – I think they should have worded it more like the topic of our post here as an expansion of their refund policy since they were already offering some refunds and aren’t refunding every ticket out there that was cancelled. There was some immediate concern and backlash about WestJet’s news as it was originally stated on their FAQ that Basic Economy fares were not included (this was even mentioned by WestJet’s CEO) but then WestJet’s response to Air Canada came out saying even the lowest cost tickets would be refunded which was contrary to what WestJet had published or spoken about. This made WestJet circle back and state they would update their FAQ by today (which they have) to properly align with that much viewed tweet. I’m not sure if their intention was to refund basic economy fares since the original FAQ didn’t state they would and the fact the airline’s CEO stated as such but they may have seen an opportunity with the Twitter fight to change their course. Or they just felt like they had since thousands of people saw that tweet and they needed to comply with it. Either way it’s better news for those who hold basic fares.

So starting November 2nd  WestJet will begin contacting customers who had eligible fares cancelled by WestJet during the pandemic. They ask that you do not contact them until they reach out to you. I get this – they don’t want an onslaught of calls like they saw early on with wait times being excruciatingly long. They ask that you be patient – there is a such a large back log of tickets that can be refunded now that it will take the months to get through them all. Even if WestJet converted your flights to a travel bank credit you can get a refund if you are eligible. Now that’s where the term eligible plays a key role – at this point of time WestJet considers eligible fares or tickets to be those that they as the airline cancelled – not those that were cancelled by the customer even if it was just a proactive measure. That will be a sore point for a lot of Canadians as they cancelled flights before phone lines became insane, as travel restrictions started etc. perhaps just days or even hours before WestJet started cancelling flights and accepted travel bank credits. Another sore spot will be WestJet Vacations packages – those aren’t part of this new refund initiative either. Those will continue to be held as travel credits.

According to the press release from WestJet their subsidiary Swoop will also be following this same policy so if you had tickets with them and they cancelled the flight on you without you cancelling first you should be entitled to a refund.

Overall this is welcome news from WestJet even if there are still some tickets out there that won’t be refunded. Perhaps those other tickets will come along soon as that would be another big undertaking. WestJet has the data to contact those they know they cancelled flights on and this will take months. What they don’t have is the exact data or exact reasons why a customer may have cancelled their flight even though it should be common sense that these people were just being proactive!