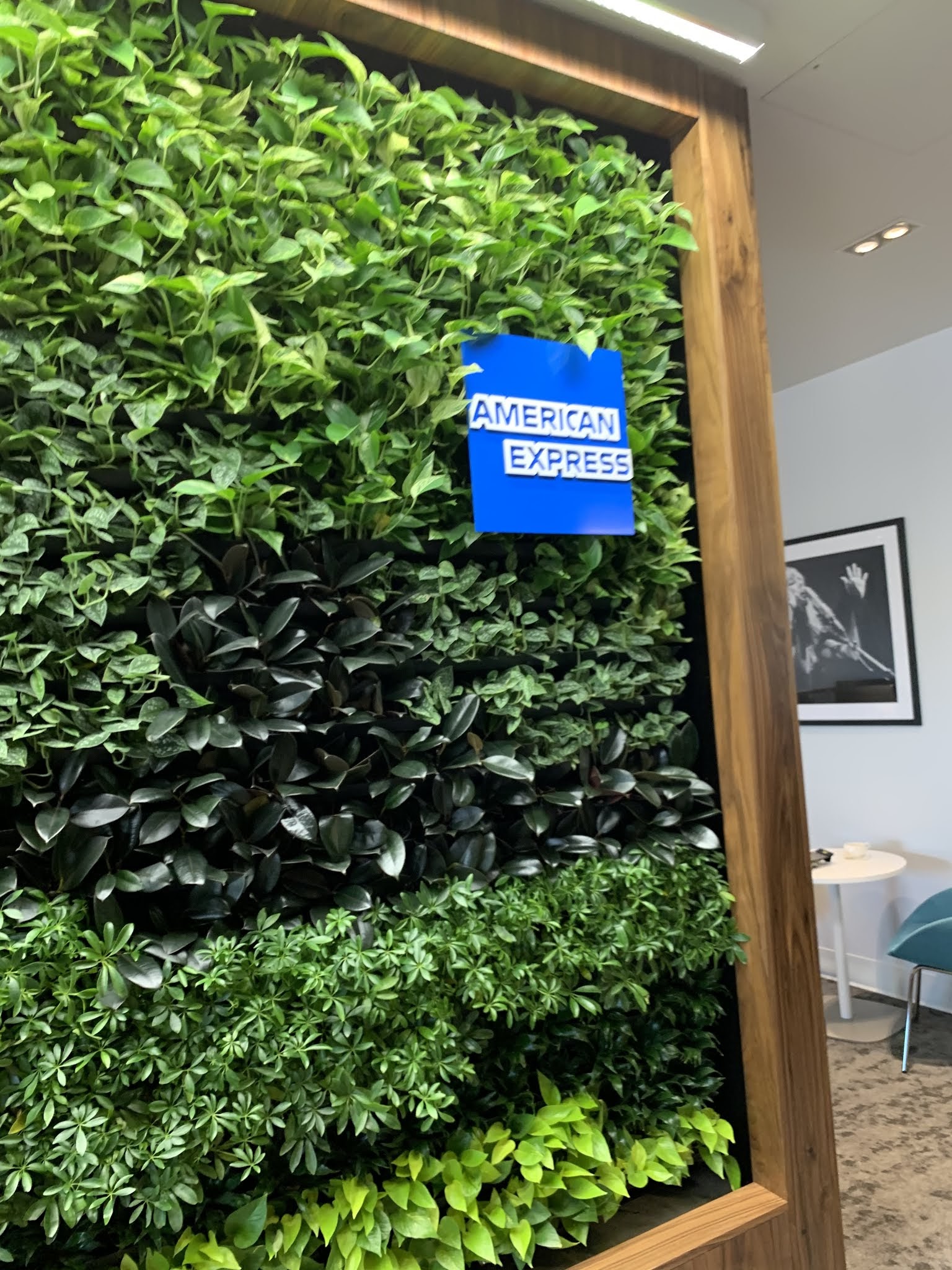 On the latest Rewards Canada family vacation we got to check out the new American Express Centurion and Escape Lounges in Phoenix. The lounges are located in Terminal 4 of Phoenix’s Sky Harbor International Airport and are very new – they just opened up during the second week of January. For most Canadian’s this means if you are flying WestJet you will be able to use the lounges if you have The Platinum Card from American Express or the Centurion Card. The Escape Lounge also has pay per use access should you not have either card. Unfortunately Air Canada changed terminals early in February so if you are flying AC you won’t be able to access the lounge without changing terminals and going through security multiple times.

For our trip the location of the lounges was perfect – right next to B23 which is where our WestJet flight back to YYC was departing from. We were flying home on President’s Day which meant the airport was insane with lots of people flying home from the long weekend but with TSA Pre-Check we cleared security in under 5 minutes. 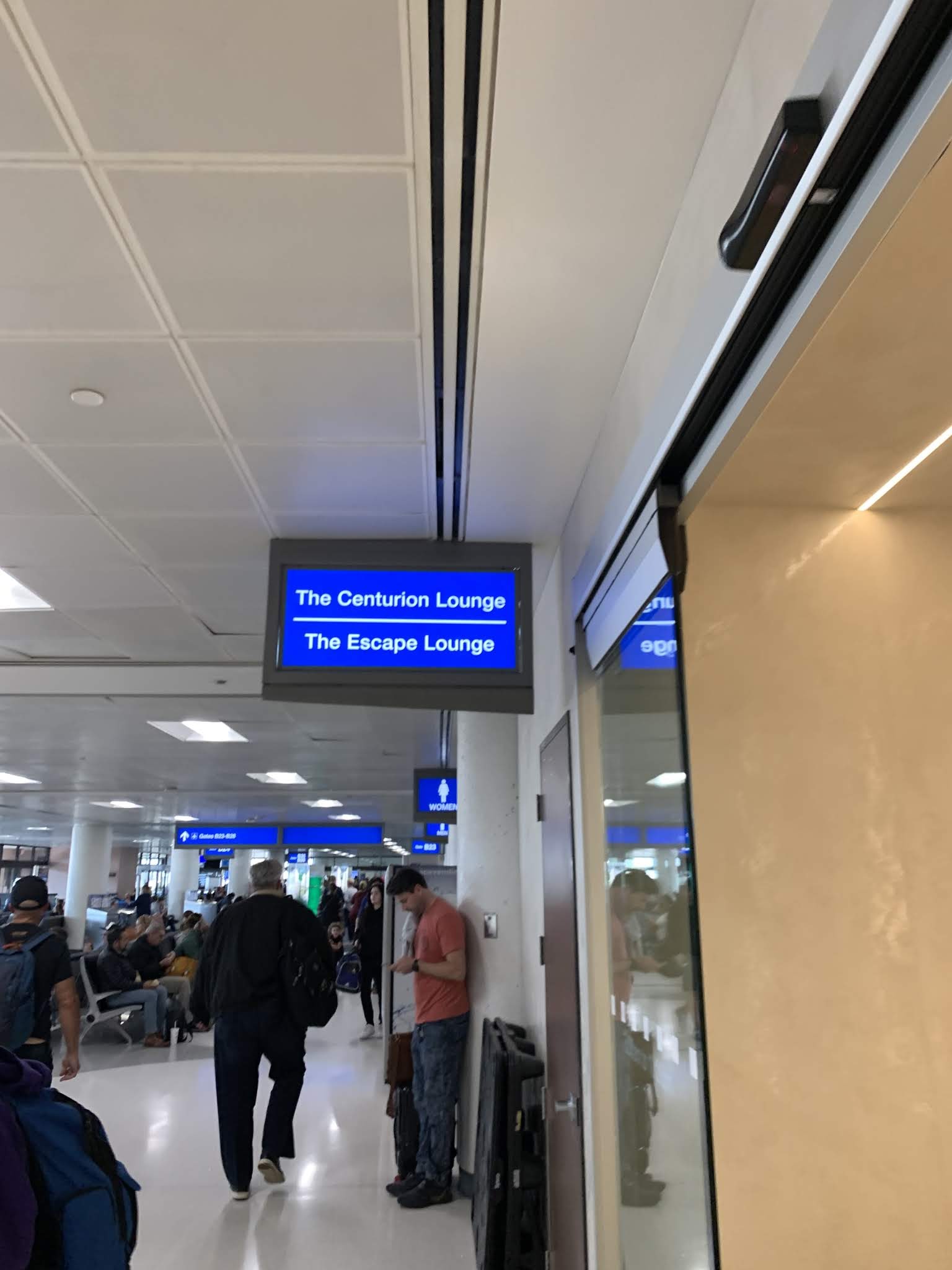 We arrived at the lounge entrance around 4pm and at check in they have three kiosks – one for the Escape Lounge and two for the Centurion Lounge. There were six of us travelling together which meant my wife and I each had to provide our Platinum Cards as the access rules state each cardholder can bring two guests in with them. Once our credentials were quickly checked we received two invite cards stating three people in total on each to hand to the agent at the top of the stairs to enter the Centurion Lounge. 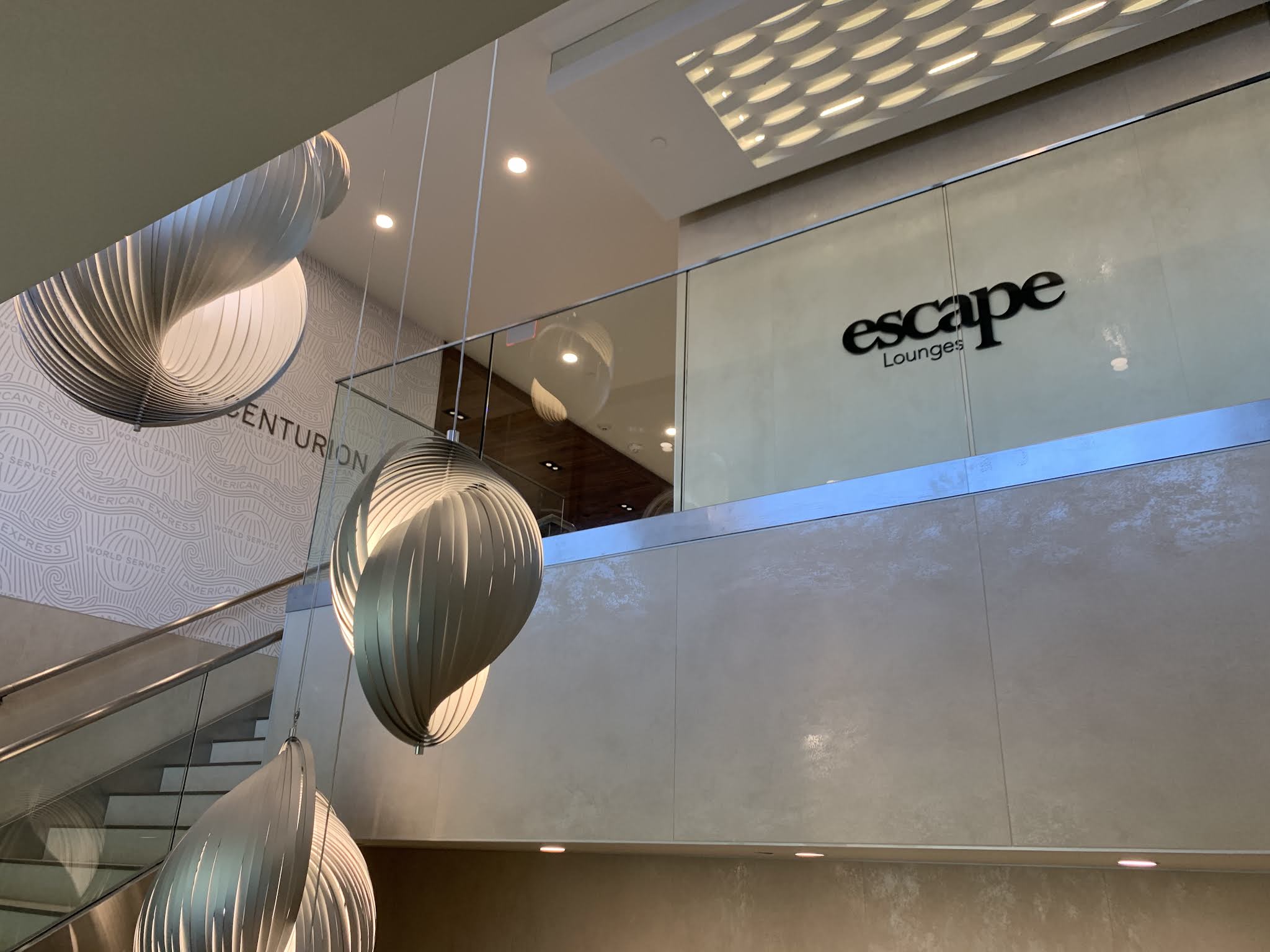 We handed the cards in and the nice agent detailed the lounge for us along with directions to access the shower suite if we wished to use it. She also gave the WiFi access details and off we went into the new lounge. The lounge itself was quite nice but seeing as it was late afternoon at the end of a long weekend it was packed! This is something that is not new to Centurion Lounges – they are somewhat a victim of their own success and many of them are packed during peak times. This was obviously a peak time. We did find a shared high bar table where the six of us could settle in and did so. It wasn’t the most comfortable or private space and after looking at the line up to get drinks for the bar and the number of people hovering over the buffet for food I went off on a mission to see what the Escape Lounge was like. As I was exiting I wasn’t the only one with that idea – another gentlemen was there talking to the agent at the entrance of the Centurion Lounge and she explained that entry to that lounge was also complimentary for Platinum or higher cardholders and that the food and drinks were exactly the same – just presented a little differently. I went in and found the lounge to be much quieter and in my opinion actually set up better and more comfortable than the Centurion Lounge. A quick text to the rest of the group and they came over and we settled in to some nice tables and seats in the back corner of the Escape Lounge.

Some of the other seating options in the Escape lounge 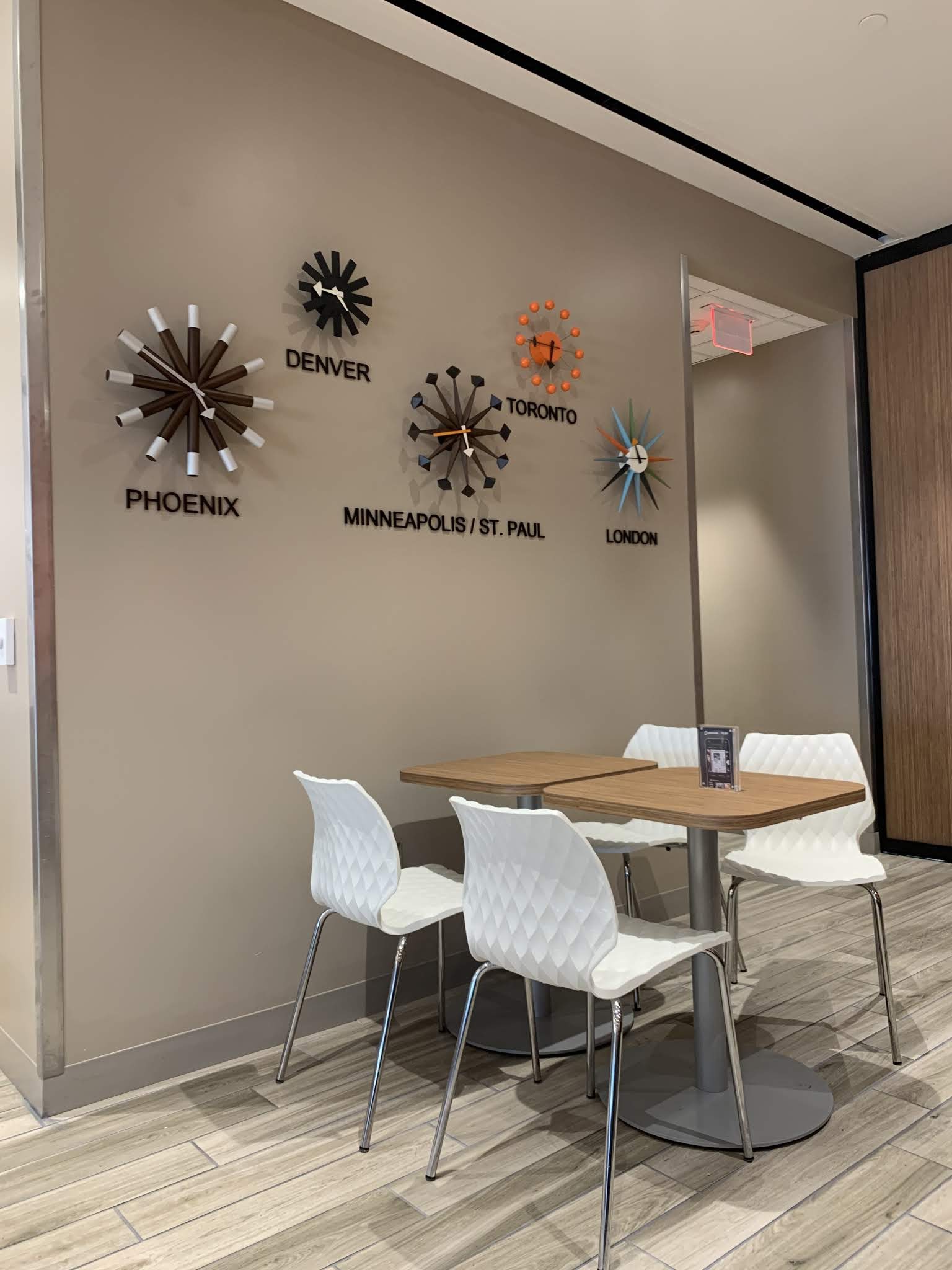 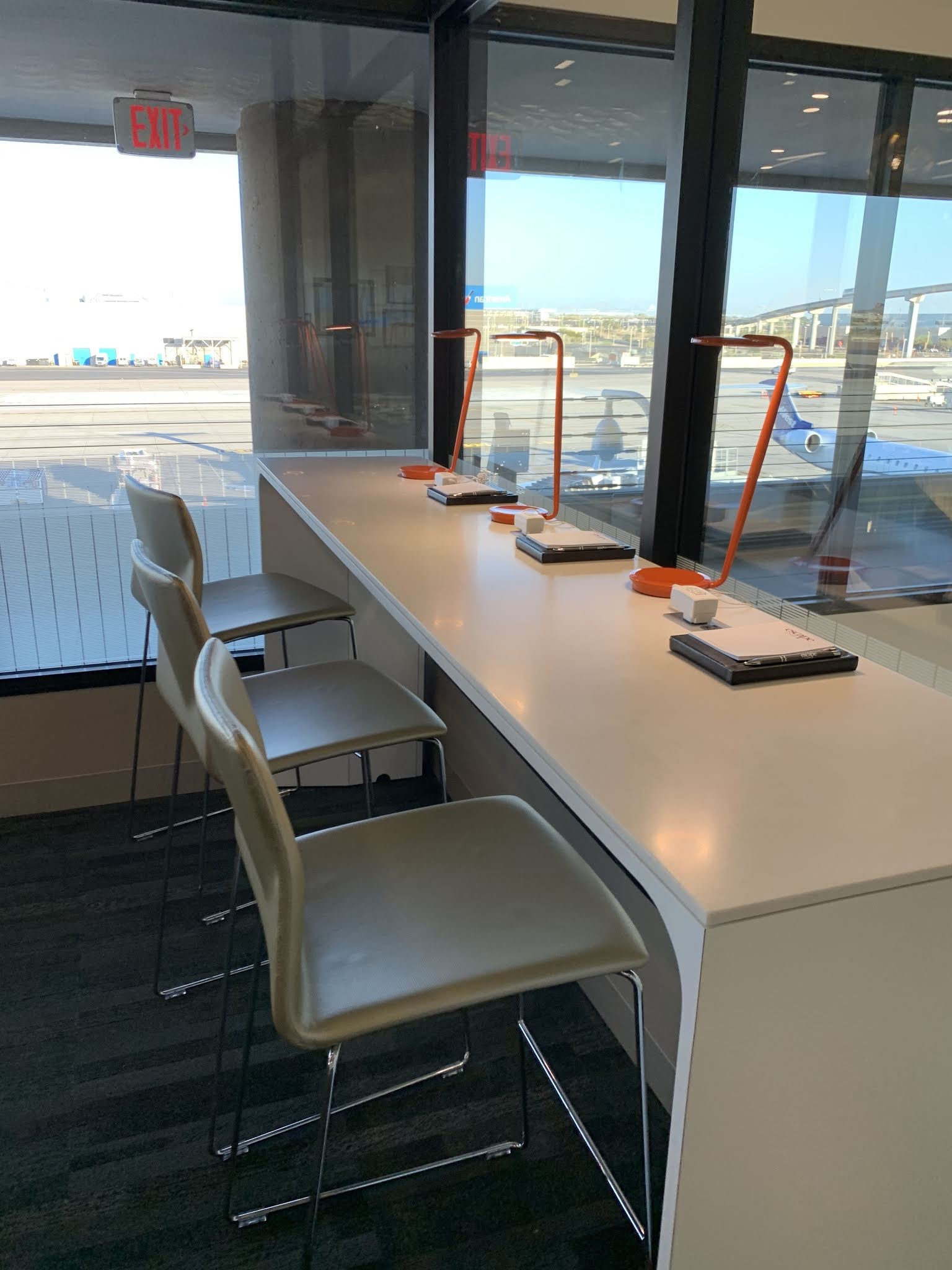 The food was quite good and ranged from some chicken with vegetable dishes, vegetarian cauliflower dishes, salads and some really good desserts. Also the Tortilla soup they had was quite delicious! Finally – and this a big plus – there was no line to get drinks from the bartender in the Escape Lounge. We were able to walk right up and order our beverages without waiting. He did ask to see our Platinum Card as a secondary check but he never did ask again after seeing it the first time. Seeing that the food is the same in both lounges I can tell you that it will be good whichever side you visit!

Both lounges also provide some great views of the tarmac and runways if you enjoy planespotting!

The Escape Lounge also has two single bathrooms for all to use and they are complete with l’occitane products: 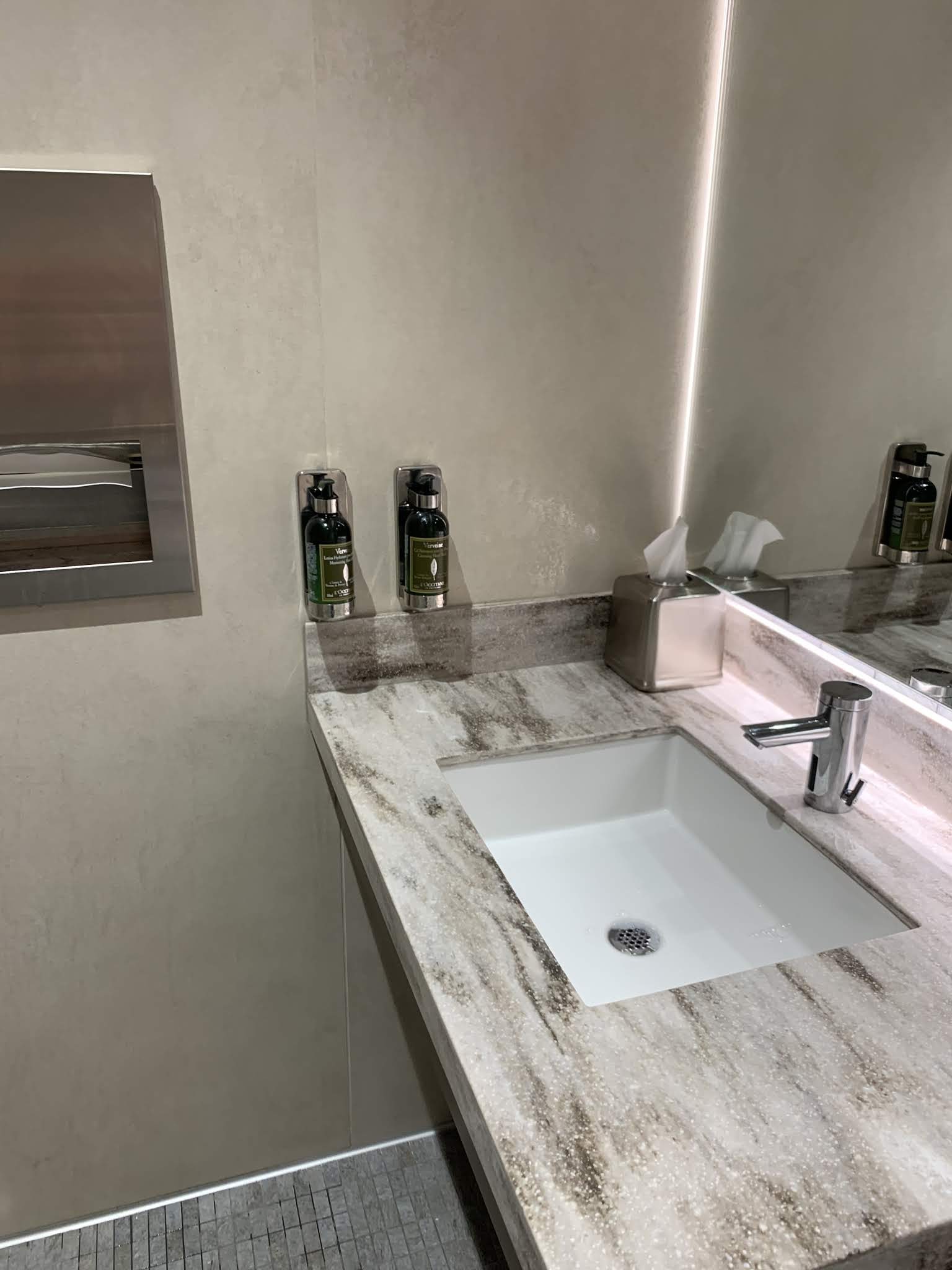 All in all these new lounges in Phoenix are great and either one makes a great place to go and relax. Hopefully when you visit it isn’t during a peak time and can enjoy the Centurion side more than we did! One of our Twitter followers mentioned she hasn’t had any issues in the lounge with crowding so she obviously knows when to travel! I too hope that one day we can enjoy a Centurion Lounge a little more as this also happened to us in San Francisco where we walked into, around and right out of the lounge as it was insane when we went! However if you do visit and it is busy the Escape Lounge is a great place to visit.