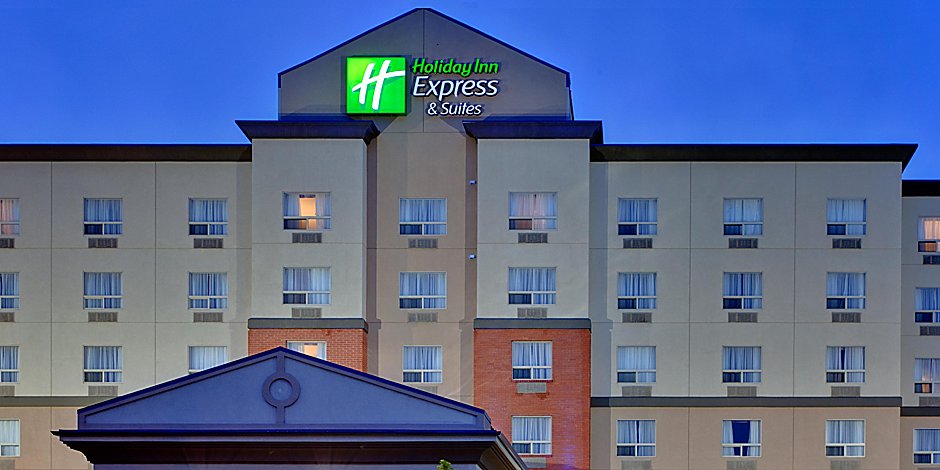 The past few months have been pretty hectic in the Rewards Canada household for our kid’s activities. One of those is competitive volleyball and it took us to Edmonton a couple of times for tournaments and our new team has the Holiday Inn Express & Suites Edmonton South as their home base.

Previous years with a previous team had us a little further south at the TownePlace Suites by Marriott Edmonton South (read my review here) so this was a new hotel for us to stay in. The location is a little closer to the volleyball venues than Towneplace Suites but not by a big factor.  The Holiday Inn Express is quite a bit older than the Towneplace Suites which only opened in 2017 but overall it isn’t too bad of a hotel but not great either.  The first thing I will say is that the breakfast however is one of the best we’ve had in these lower to mid level hotels that have the free breakfast option! There were multiple meat options, the eggs actually tasted real and there were lots of food options to choose from. The service as well from the people looking after the breakfast room was great!

The rooms themselves were pretty decent for a Holiday Inn Express – better than the last one I had stayed at in Lethbridge a few years prior. My first of two complaints of the room is that I did find the mattresses to be really hard which didn’t make for the best sleep: 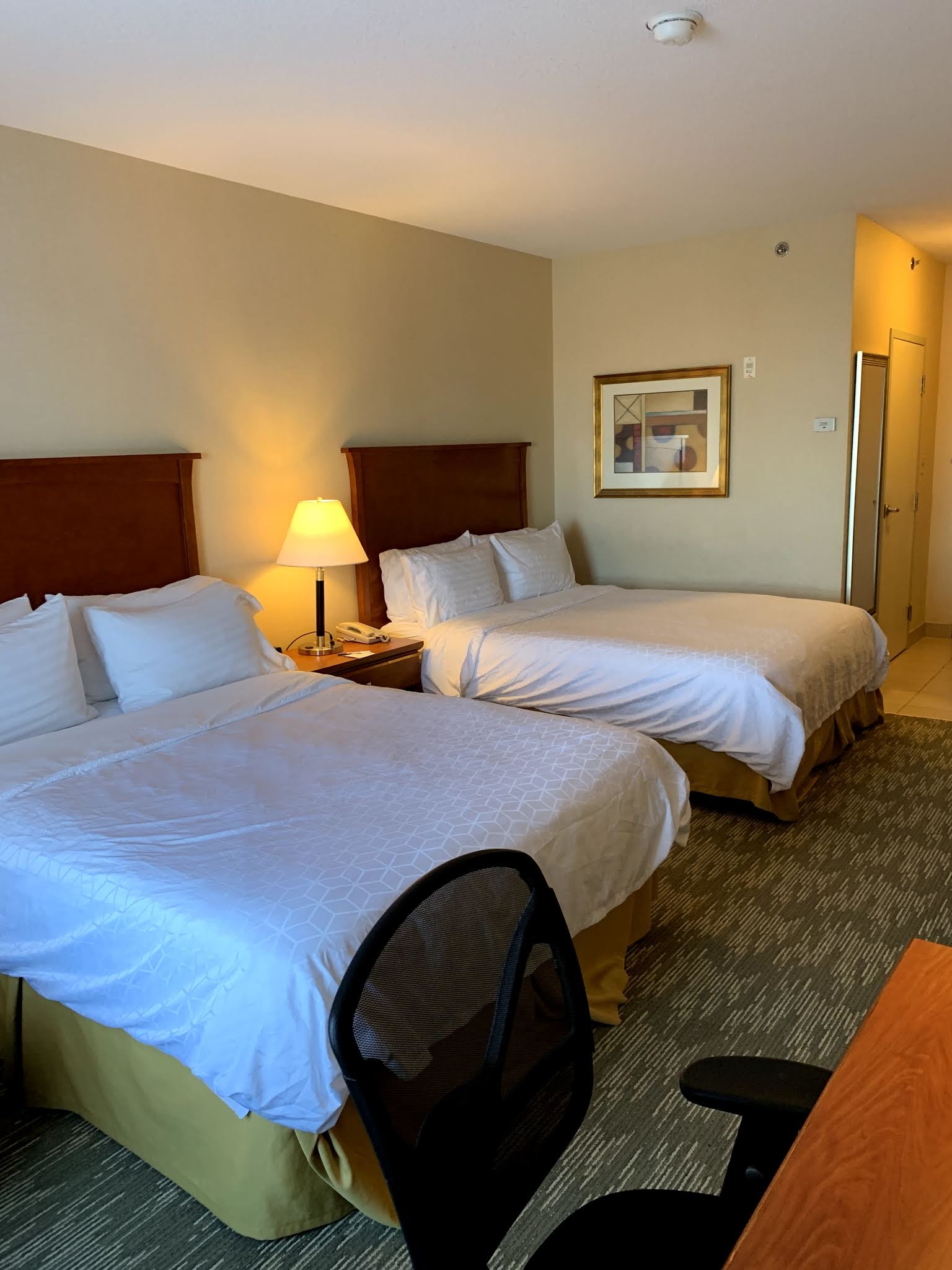 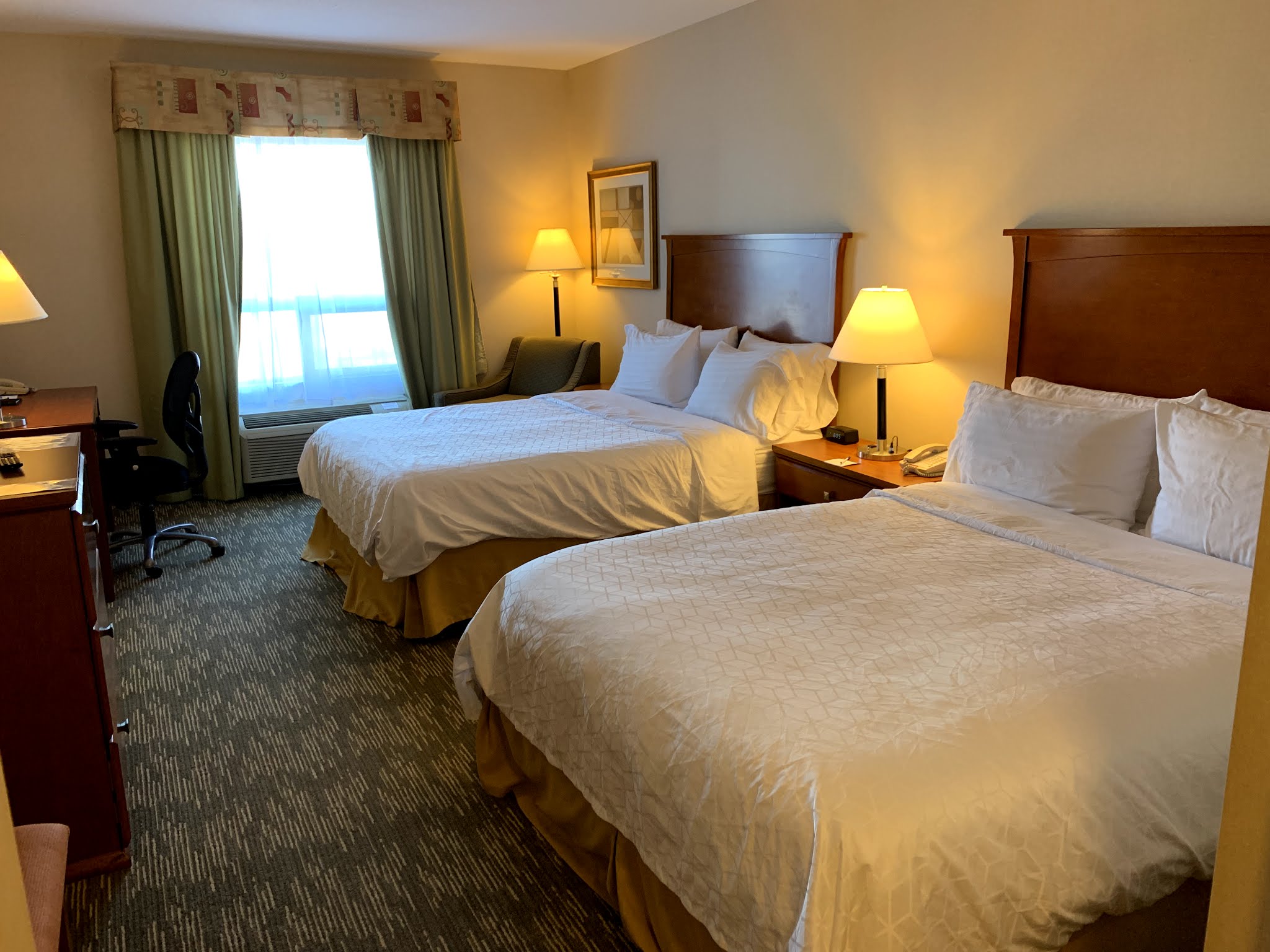 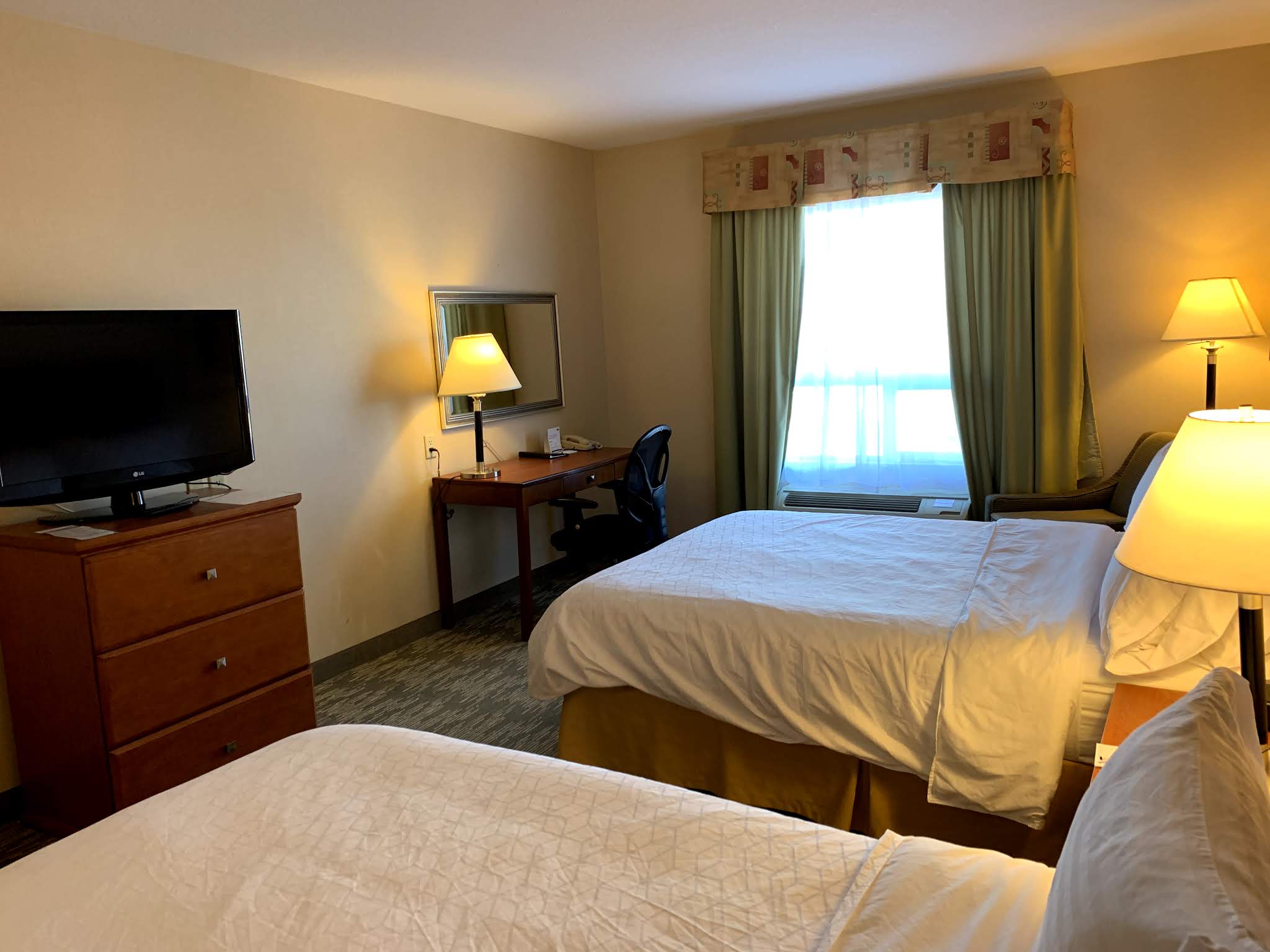 There is lots of room in the two queens rooms which in part is thanks
to (or maybe no thanks to) a small dresser and small TV: 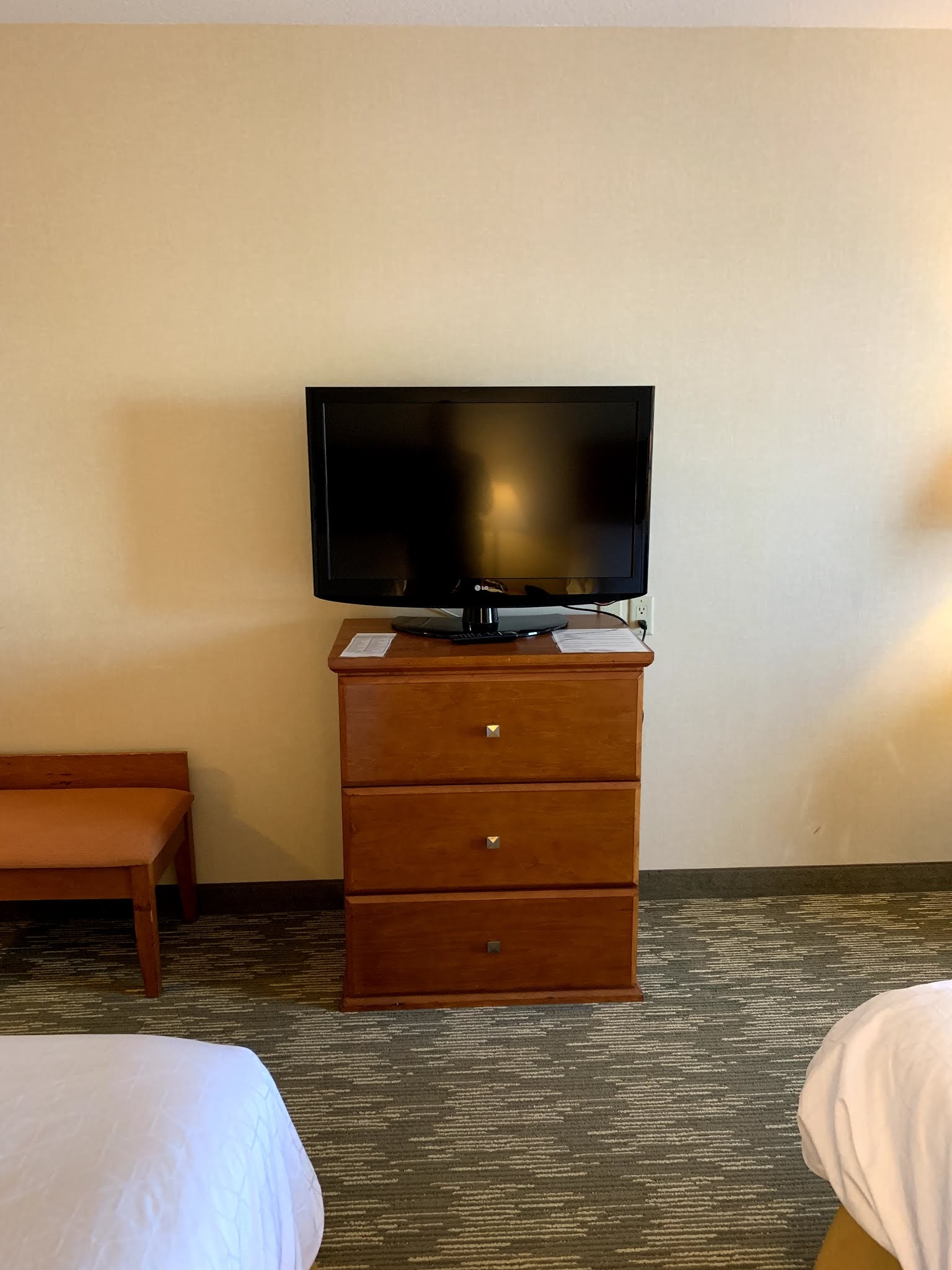 The rooms also have a mini-fridge, microwave and Keurig Coffee machine: 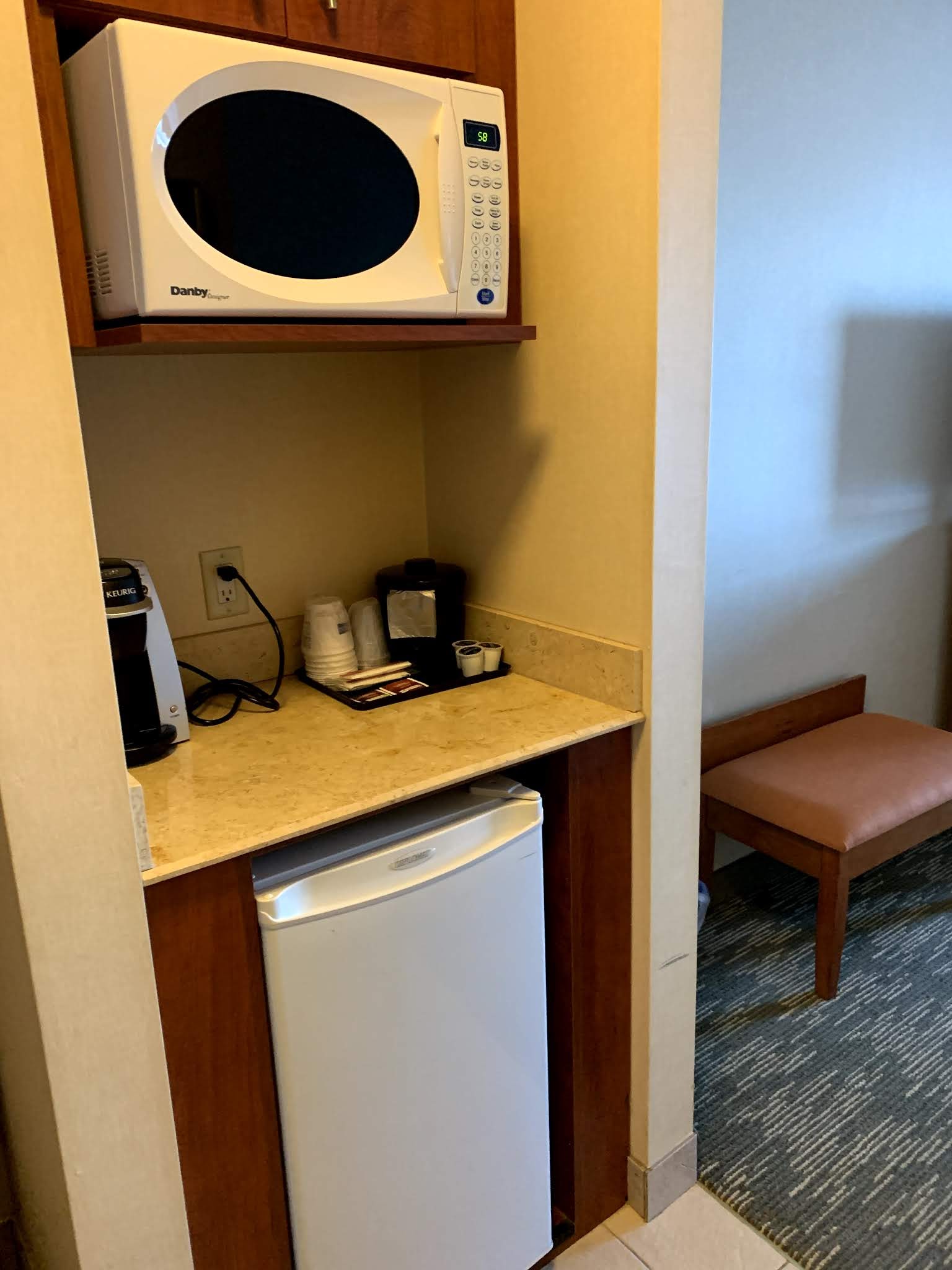 The bathroom and toiletries were standard for an HI Express. Good thing was that for both stays the bathrooms were very clean and showed that they were well cared for by the housekeeping staff: 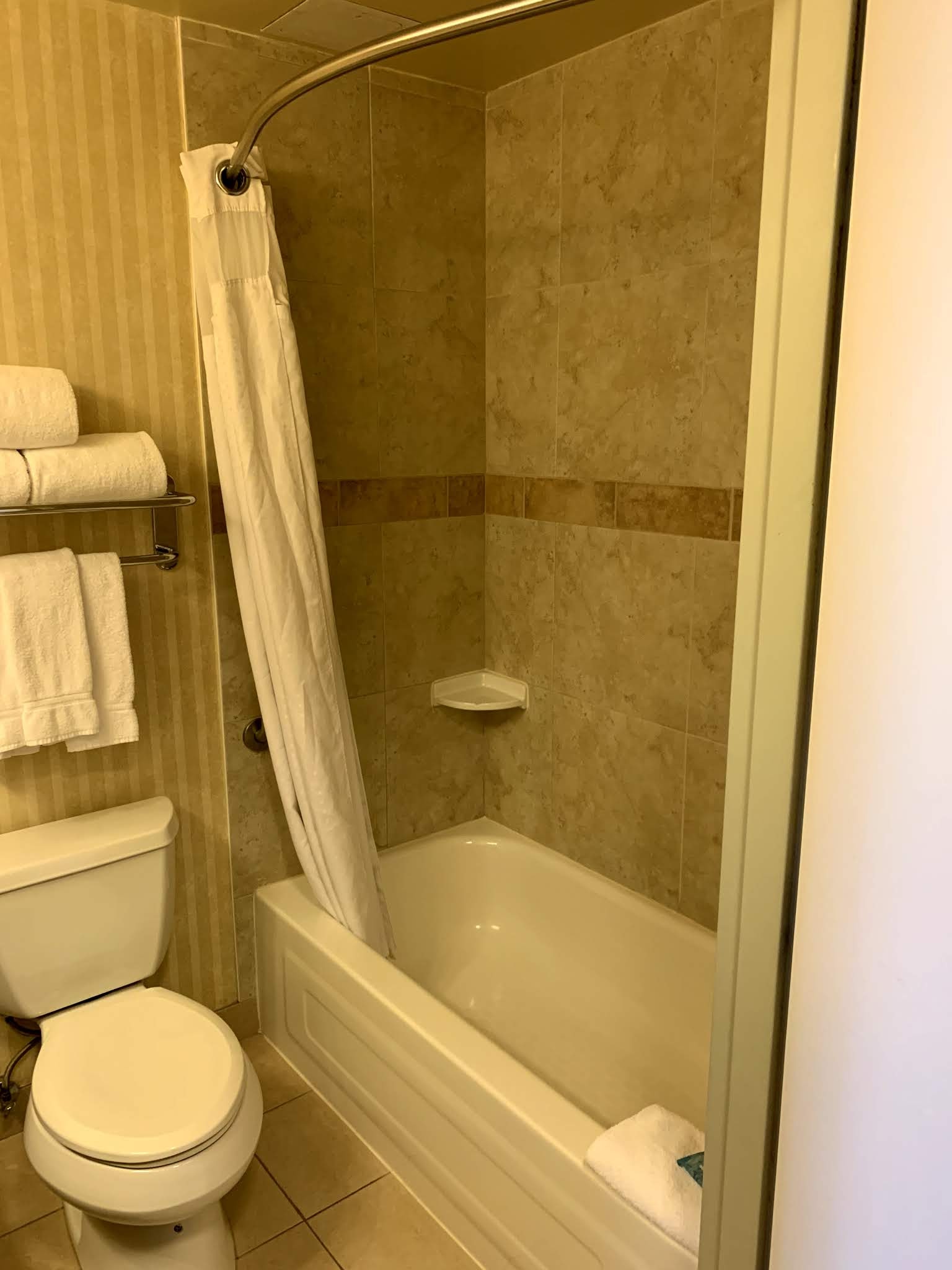 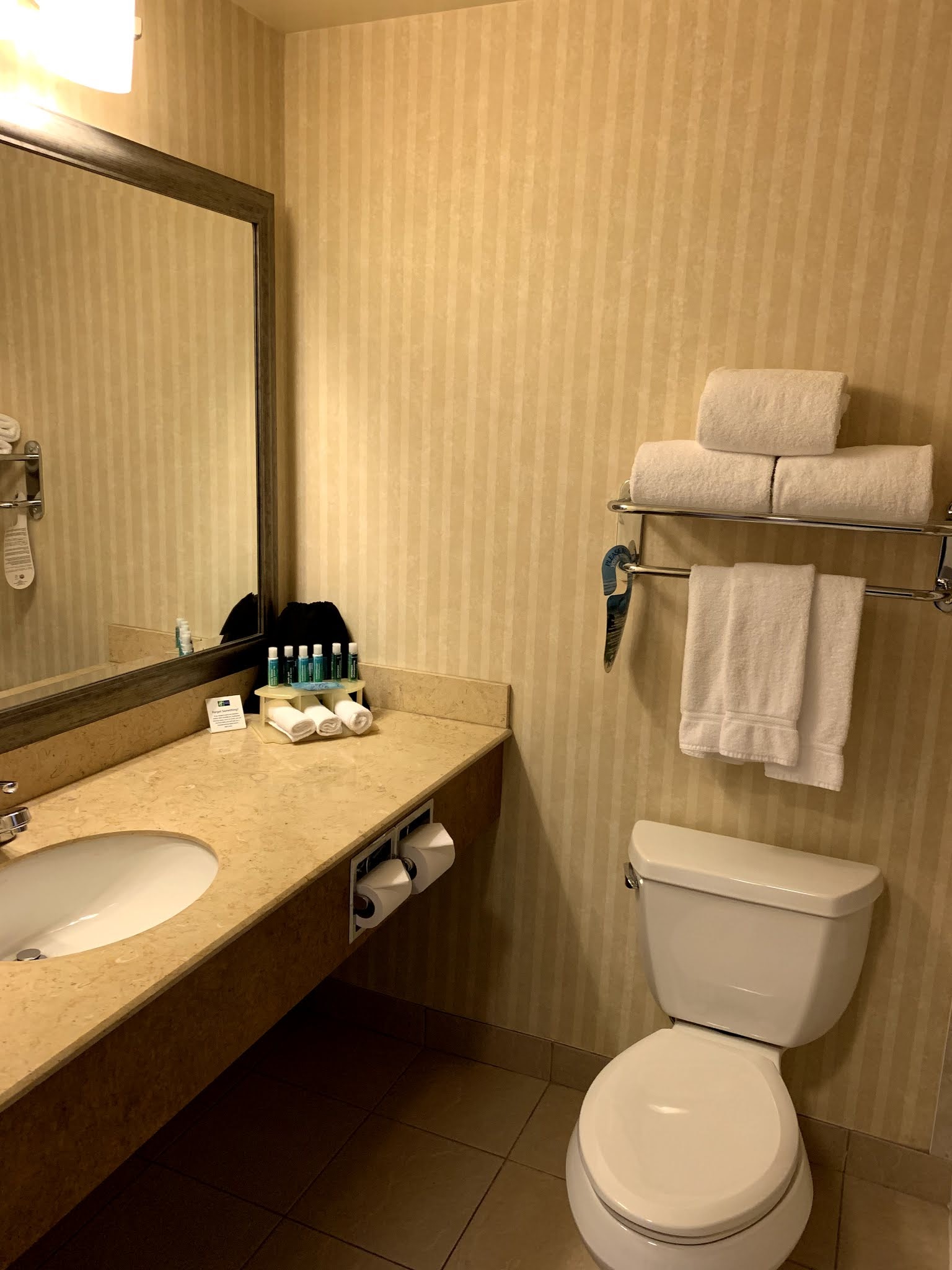 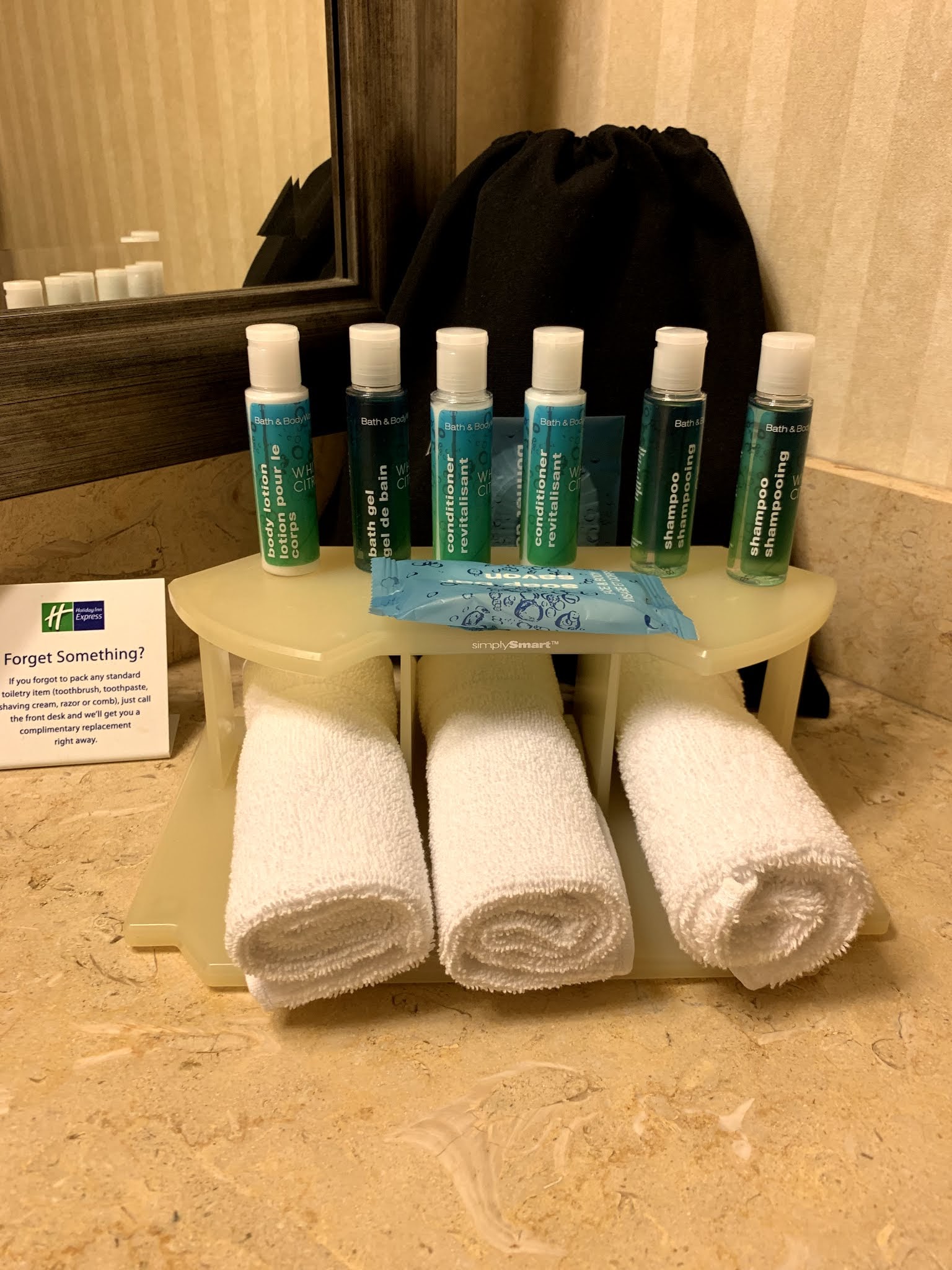 As I mentioned above I had two complaints, the second shows that this location is somewhat older and that there weren’t a lot of electrical/USB outlets. Sure you don’t need 20+ outlets like we found in the Comfort Suites Regina (read our review here) but there may not be enough if four people stay in the room. In the pictures below you’ll see four available plugs and the one by the TV isn’t the most convenient and there is only one in the lamp on the nightstand. 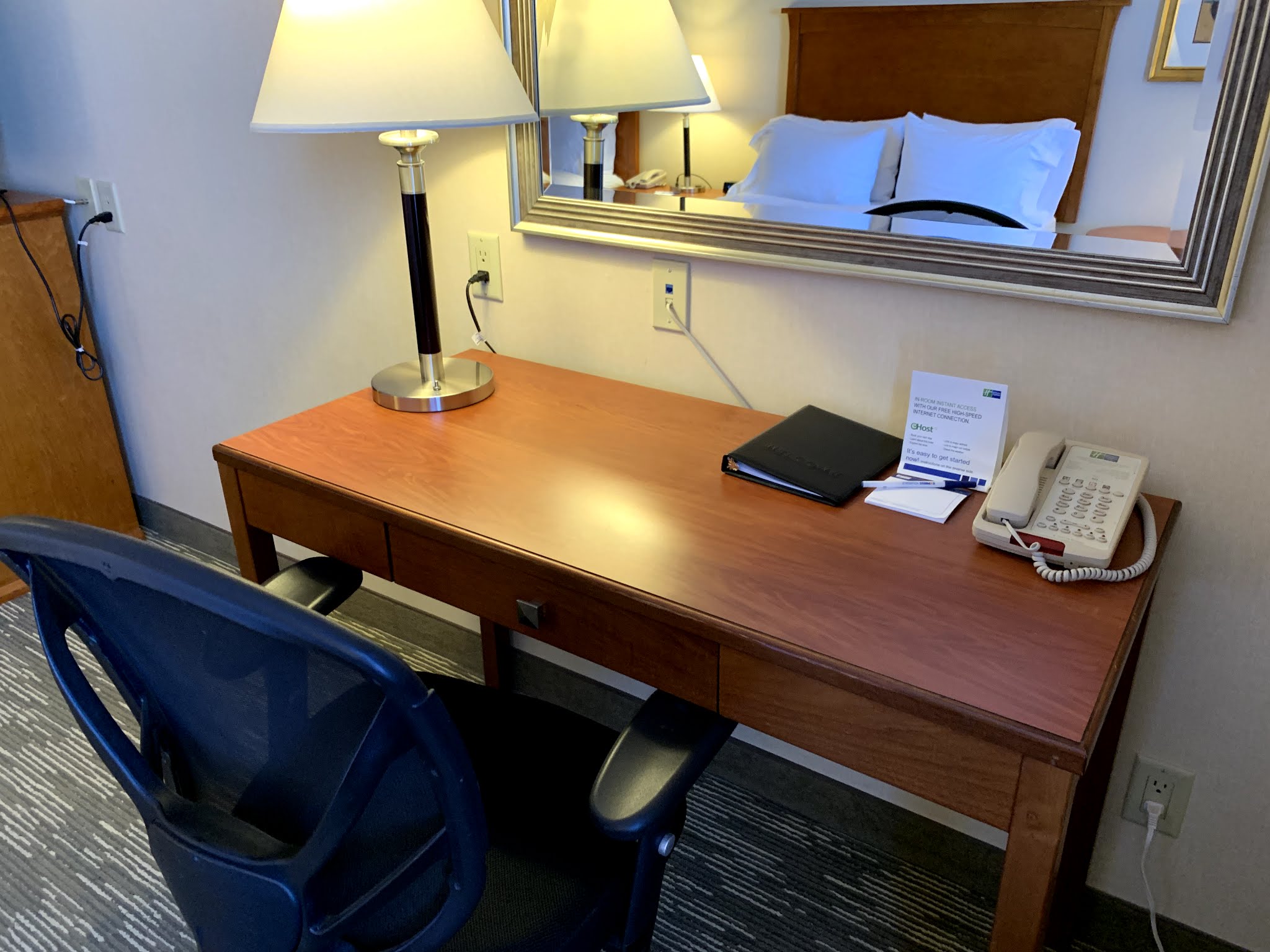 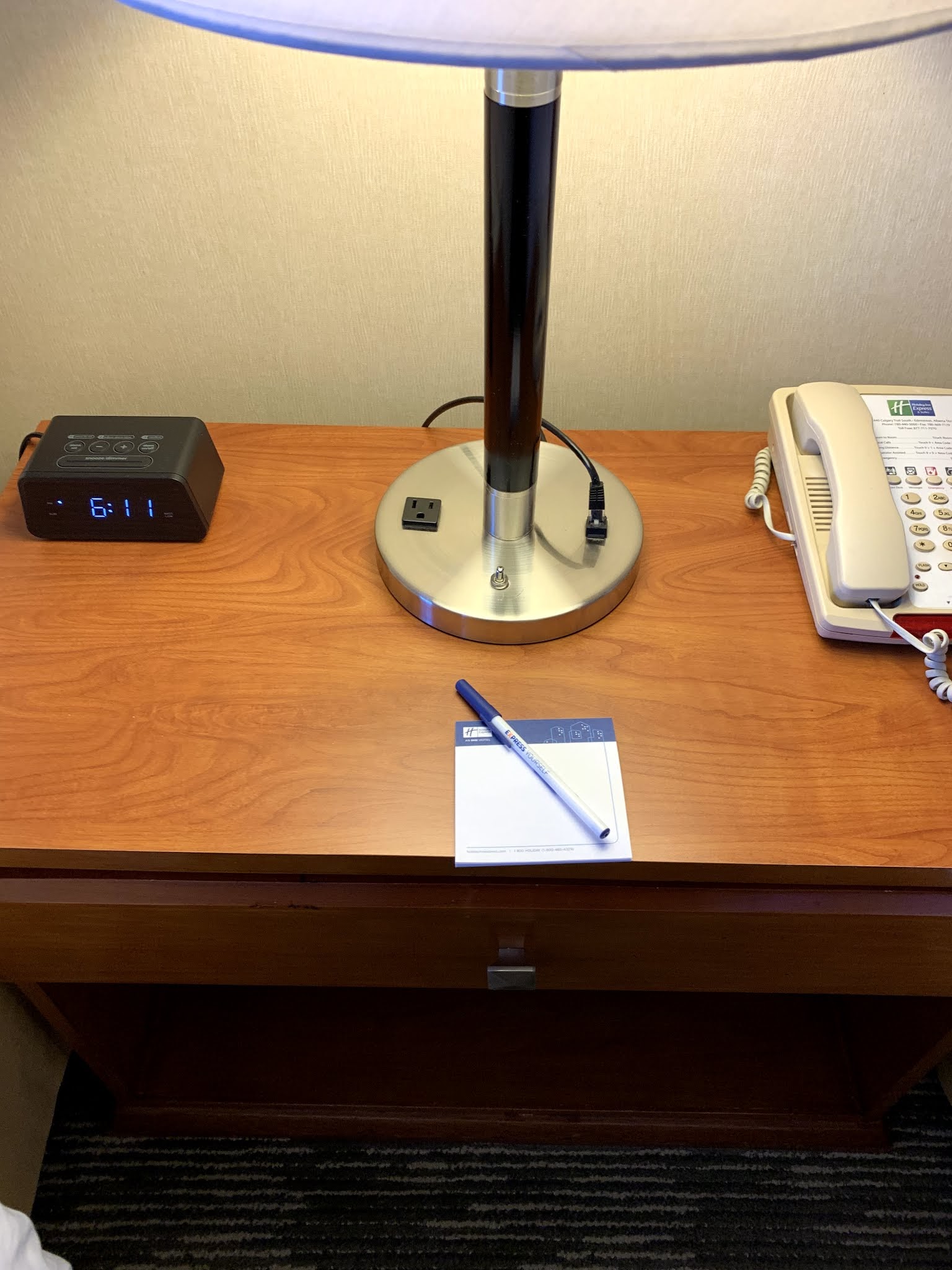 Overall the hotel isn’t too bad of a hotel. It’s not the best place I’ve ever stayed at but it isn’t one I wouldn’t return to if asked to stay there. Both times the hotel was very busy on the weekends we were there with lots of sports teams (volleyball, hockey, curling and more) so you can expect the breakfast area to be busy and that just reminded me of a third complaint – I know I said I only had two but I just remembered this one. This hotel has some of the slowest elevators ever! The two elevators take forever to move up and down and when you add in dozens of kids and parents of many sports teams  you’ll want to head straight for the stairs unless you have hours to spare. I used the stairs all the time despite staying on the fourth and fifth floors. Ain’t nobody got time for slow elevators!

Talk to us! Have you stayed at the Holiday Inn Express & Suites Edmonton South? What are your thoughts of the hotel? Or are you
planning to and looking forward to it? Let us know below!

Title image via IHG, all other images are those of the authors.