We are now officially back at it and unfortunately start the New Year offer with not so great news from IHG Rewards Club.

There are two components to the 2018 changes that take effect on January 16th 2018. The first is a new maximum requirement for some of IHG’s highest end hotels. The old maximum point requirement for stay at the highest category IHG hotels was 60,000 points and that has now been increased to 70,000 points. There are a total of 13 hotels that will fall under the new 70,000 point requirement. All 13 are InterContinental Hotels and include the ever popular locations in Bora Bora as well as a couple of European and Asian locations and seven in the U.S.

The second change to the program is that annual list of hotels that are changing in the category of their nightly points requirement for a free award night. This type of list is expected and is seen from pretty much all the hotel chains each year. IHG does have over 5,000 hotels so you would expect a decent sized list of changes and that it is. Over 10% of the hotels are actually changing categories, 499 are going up in the number of points required while 192 are going down. Here in Canada we have 34 hotels changing, 21 are going up and 13 down. Of the 21 going up 8 are actually jumping up by 10,000 points which is a large increase!

We never want to changes like the first one seeing the actual maximum point requirement increase, granted it is at only a very small amount of hotels in the IHG family but they are some of the most popular ones and it is a pretty big jump from 60,000 to 70,000 points. The rest of the hotels moving up or down are expected, as bad as some of them can be also jumping by 10,000 points. Seriously 10,000 more points per night at the properties in Hinton? Probably due to Alberta’s economy rebounding and more Oil & Gas workers staying there but a 40% increase in the points required is too much! Here’s hoping IHG has chosen not to mess with PointBreaks and will still offer the 5,000 point award nights at roughly 100 hotels each quarter.  The current list ends at the end of this month so we should see what will happen then.

As always with changes like these if you have been planning on redeeming IHG Rewards Club Points for a stay either book now for those hotels that will increase in price or if you can wait to book for those hotels moving down. 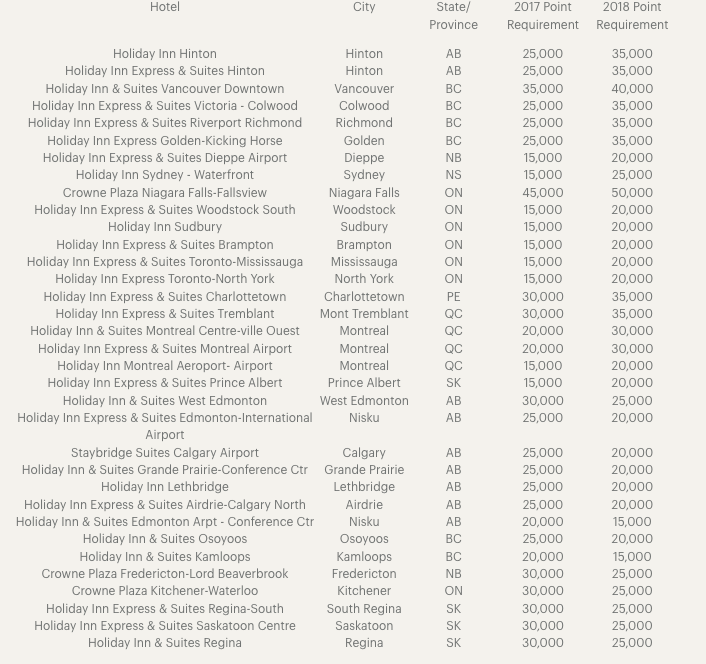