Sometimes we get inquiries for credit cards that all the reader is asking for is a way to earn as many points as possible. They could care less about benefits, insurance and what not. They just want to rack up a ton of points on their everyday spending. That’s where the Guide to picking a Points Earning Machine come into play. And you know what? They actually do include some benefits, insurance and extra features – not that that matters since we’re only talking points but I thought I’d throw it out there.

This post takes into consideration the high points earning rates on some of the most popular credit card spending categories in Canada. Namely, groceries and dining. We all have to eat, so those really are the primary drivers of spending on credit cards and why many credit cards in Canada have accelerated earn rates on groceries and/or dining.

What do we mean by Points Earning Machine?

Every time I get to chat with the Globe & Mail’s Rob Carrick about credit cards or loyalty programs we seem to end up using the term Points Earning Machine. By that we are referring to the American Express Cobalt Card and its 5x points earning on eats and drinks plus other accelerated earn rates. We’ve called it that for quite sometime now but did you know the Cobalt Card is not the only points earning machine?

That’s right, Rewards Canada would actually classify three cards in the Canadian market as true Points Earning Machines. And by true we mean that when you earn 5 points per dollar you will get at least a 5% return when you redeem those points for travel. None of this “earn 5 points per dollar but when you redeem them you’ll only get 3.34% in value” like we see from some other cards in the market. So what are Canada’s Points Earning Machines? Continue on to find out! 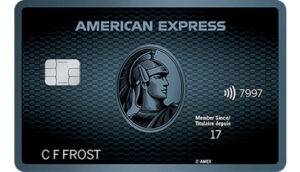 The aforementioned American Express Cobalt Card was the original Points Earning Machine in Canada. It was the first card to offer 5x points earning without losing value when redeeming for travel. In fact, over the course of its 5 year life span Amex has actually made the card more valuable. They increased the value for cash back statement credits to match travel redemptions.  Then they added in conversion options to airlines. When redeeming for any travel or cash back you redeem at 1,000 points to $10 or up to 5% return for your spending (Return value can go up substantially when redeeming via Amex’s Fixed Points for travel or converting to airlines/hotels)

The 5x points awarded for eats and drinks on the Cobalt Card is capped at $30,000 annually. All the other earn rates have no caps attached. 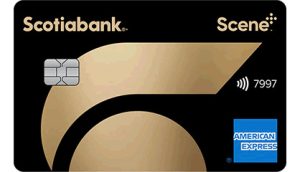 The next card in Canada that became a Points Earning Machine is the Scotiabank Gold American Express Card. When the card was first introduced it awarded as much as 4 points per dollar spent. However with the Cobalt Card offering 5x points Scotia decided to match that. And then in 2022 with Scene+ taking on groceries with Sobeys, Safeway, Food land etc. the card got an additional boost to 6x points for purchases at those stores. So here you have a card earning 5x and 6x points on some very popular categories! You can redeem these points at a rate of 100 points to $1 for any travel, groceries, dining and movies (up to a 6% return). If you redeem for statement credits outside of travel (cash back) your return drops to  ~0.68% to ~4.08%

The Scotiabank Gold American Express Card has a annual spending cap of $50,000 in total across its three accelerated earn categories.

The third and final card that we consider a Points Earning Machine is the MBNA Rewards World Elite Mastercard. This card was also recently revamped and offers 5x points on some very popular spending categories and also has high spending caps for those categories. The card also offers a 10% birthday bonus (up to 15,000 bonus points annually) that put this card’s potential point earning at 5.5 points per dollar spent. When you redeem for travel the card holds the value of those points and some eGift Cards with this card will actually provide even more value than that. If you redeem for cash back you take a slight hit in value but the 5 points still provides a respectable 4.15% (4.57% with the birthday bonus)

To pick the right Points Earning Machine Card for you, just answer the following questions to lead you to the right card!

1. Would you like to have the option to convert to airline & hotel programs like Air Canada Aeroplan, British Airways Executive Club, Marriott Bonvoy and more?
If yes, then get the American Express Cobalt Card
If no, then go to question #2

2. Would you like your card to provide the best redemption value possible for cash back rewards in addition to travel? (basically, do you want both options so you don’t have decide right now?)
If yes, then get the American Express Cobalt Card
If no, then go to question #3

3. Do you do the majority of your grocery shopping at Sobeys, IGA, Safeway, Foodland, FreshCo, Voilà by Sobeys, Voilà by IGA, Voilà by Safeway, Chalo! FreshCo, Thrifty Foods, IGA West, Les Marchés Tradition, Rachelle Béry and Co-Op?
If yes, then get the Scotiabank Gold American Express Card.
If no, then go to question #4

4. Do you do the majority of your grocery shopping at Loblaw’s family of stores (Loblaws, Real Canadian Superstore, No Frills, Zehrs etc.)
If yes, then get the MBNA Rewards World Elite Mastercard
If no, then go to question #5

5. Do you spend more than $30,000 per year on groceries, dining, coffee shops, bars etc?
If yes, then get the MBNA Rewards World Elite Mastercard or the Scotiabank Gold American Express Card
If no, then go to question #6

6. For those who spend less than $30,000 per year on eats and drinks, do you spend a lot on travel?
If yes, then get the American Express Cobalt Card
If no, then go to question #7

7. Do you have frequent spend on gas stations, transit, ride sharing, and/or taxis,
If yes, then get the Scotiabank Gold American Express Card
If no, then go to question #8

8. Do you have frequent spend on streaming/digital services, monthly memberships and/or household utilities?
If yes, then get then get the MBNA Rewards World Elite Mastercard
If no, then go to question #9

You don’t have to pick just one card!

Ideally, if you are all about earning the most points you’ll get two or three of these Points Earning Machine cards. At the very least you would want to get one of the two American Express cards and then the MBNA card. The MBNA card would be your back up card to use at merchants that don’t accept American Express. (Come to think of it we here at Rewards Canada should make an Ultimate 5x Points Credit Card portfolio. The only issue with that is the Visa card side of things as there really aren’t any true 5x points Visa cards…)

If you simply want to earn as many points as possible that will retain their value when you redeem for travel and other rewards look no further than the American Express Cobalt Card, the Scotiabank Gold American Express Card and the MBNA Rewards World Elite Mastercard. Using any combination of these cards will help you build your balances quickly. And then you will be redeeming for rewards sooner than you think.