Cineplex SCENE and Scotia Rewards members rejoice! Your revamped and combined Scene+ program is now here! After some technical issues causing the originally planned launch in November the program went live today.. well some of it was actually operable over the weekend but for the most part all of it went up today.

For the most part the combined program isn’t much different at all from the two separate programs. The majority of the earn and burn in the new program matches that of the two old programs. What essentially has happened is that Cineplex SCENE members now get access to redemption options like travel rewards that were part of Scotia Rewards and Scotia Rewards members now get access to earning more points at places like Cineplex, their restaurant partners and more. Thus we won’t go into huge detail here on the earning and burning other than what we do see is new or worthy of further mention from our previous posts.

💳 Rwrds reminder: Get ready for Scene+ the merged program of Scotia Rewards and Cineplex SCENE 💳

Membership in the new program

The big thing in earning is the combining of points – that is when you use your Scene+ card at a participating partner and pay for it with a Scotia card that earn Scene+ points all those points will pool into the same account. Before it would be split between the two programs so now earning is accelerated. Think of AIR MILES and Aeroplan here with their numerous partnerships where you earn with your loyalty card and then can earn on those purchases with one of their co-brand cards.

A good example of this is one I mentioned in our last podcast of 2021 whereby if you eat at one of the restaurants that participate in Scene+ like Swiss Chalet, Montana’s etc. you’ll earn 1 Scene+ points per $3 spent (and any bonuses on top of that) and pay for it with your Scotia Gold American Express Card you’ll earn an additional 5 Scene+ points per dollar spent as that card earns 5x points on dining not to mention entertainment so you’ll want to use that card at Cineplex theatres as well! Of course that’s not your only Scene+ credit card option, there are others which you can check out here.

You basically now have the ability to earn a ton of points at once within the program when you shop at select retailers. 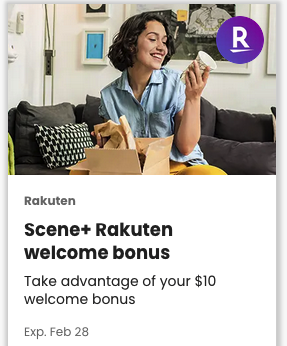 There are a couple of new earning options as well. The first is Scene+ Travel which I cover separately below and they have added one more partner of note to earn at and that’s Rakuten (thanks @joshnet for alerting us to this). This the online shopping portal formerly known as ebates.ca is now an earning partner of Scene+. The partnership sees them offering a $10 bonus when you join Rakuten and complete your first purchase of $25 or more. (Hint you can earn $30 cash back when you join via our link and spend $30 and then link your account your after) This is for new Rakuten members and is available until February 28. For existing Rakuten members and for those members making more purchases after their initial one you can earn 20% more cash back on purchases made through Rakuten when you link your Scene+ account to Rakuten.

Click here to learn more and to link your accounts.

The redemption side doesn’t change a whole lot either here. All redemption rates remain the same and the two key takeaways are that those who are only members of Scene+ (nee Cineplex SCENE) can now redeem for some Scotia Rewards options – namely travel. And for Scotia cardholder who were earning points in Scotia Rewards you no longer have to wait to get to 5,000 points to redeem for travel. You can redeem as little as 100 points for a $1 credit towards any travel or redeem 1 point for 1 cent off when booking via Scene+ Travel. Plus Scotia Rewards members also now have access to all the movie redemption options that Cineplex SCENE has.

The new Scene+ Travel booking portal is now available to all members.
It was actually up and running for a little bit over the weekend as
noted @Joshnet as he was able to login with his Scotia
Rewards account and check out the new Scene+ Travel which is powered by
Expedia.(a big thanks to him he’s been keeping me aware of so much going
on with Scene+ over the past few months). As Josh mentioned it looks
and feels a lot like ExpediaForTD which is the online travel portal for
TD Rewards members.

Scene+ members can book travel via this
portal and choose to earn points on hotel or car rental purchases and
you can choose to redeem points against any travel booked via the
portal.

When you search for travel the results will show you all your options,  the cash price, how many Scene+ points you can earn (if it’s a hotel or car rental booking) and how many points in total it would take to redeem for the entire amount. 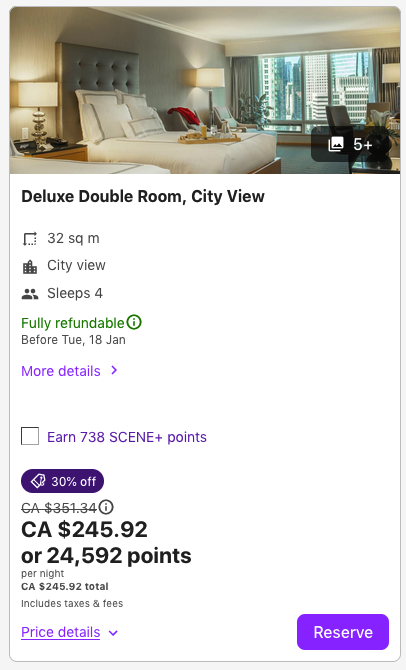 Once you click on ‘Reserve’ you’ll see the following on the next page: 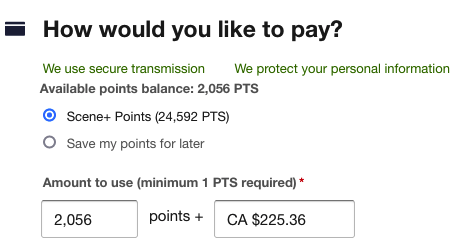 As mentioned already you don’t need the entire amount of points however
to redeem for the said travel booking. You can redeem as little as 1
point per this screenshot. You simply input the amount of points you want to use and it will then tell you how much you still have to pay with cash (well, with your credit card).

You’ll also see this summary on the page showing you how much of a discount you get with your points: 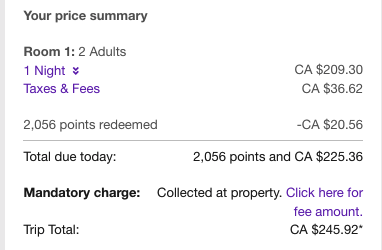 On the flights side you can redeem for any flights they bring up, in any fare classes aand they also give you the options to choose from within fare classes. Here’s economy class between Calgary and Toronto as an example: 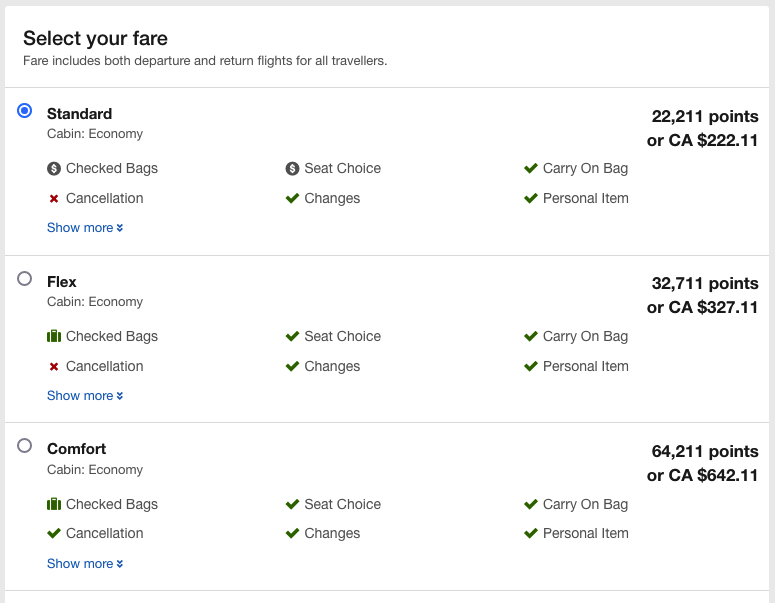 And once selected, the points redemption for flights works exactly like it does for hotels:

Overall I am really impressed with the booking engine on Scene+ Travel. It is really easy to use, very intuitive and places all your options right in front of you making it super easy to use.

Technical issues delayed the launch of the program by several weeks and as expected there still seem to be some teething issues. This can be expected with any change or update to program let alone the combining of two programs. Here’s what we’ve seen so far:

If you come across any issues please let us know in the comments below as Scotia and Scene do monitor our posts and comments!

In the meantime I would recommend everyone keep a close eye on their accounts and purchases over the next few weeks as Scene+ works out the kinks and then you can follow up to request any missing points etc.

The new Scene+ program does seem really promising! I mean I know some parts of the old Scene program took a devaluation early in the year which was unfortunate but I think that was done in anticipation of this new program and its expanded earning capabilities with the credit cards. Overall though I think many members will be happy with the new program and the changes that have happened. The program as a whole definitely upped their game here and was the right move for them after Cineplex SCENE’s plans to become a coalition program fizzled years ago. Now, while still considered a mini-coalition program in our eyes, it is a big player in the market and the competitors will need to keep an eye on them as this transition and the new program kept most if not all of what was good from the two previous programs combined into one.

As always we’d love to hear your thoughts on the new program in the comments section below!

Click here to learn more about the new Scene+ Program