As we do each month we bring you the latest set of Miles & More Mileage Bargains (Meilenschnaeppchen)
discounted
mileage awards.This is now the third month in a row we’ve seen them after disappearing for a year and a half due to the pandemic. Once again there’s a lot of them in Economy and
Business Class to choose from and this time we see Calgary and Halifax with huge discounts on the table. Sorry Vancouver, you’ve been left out of the mix this month.

It’s the Eurowings Discover flights that take the cake this month though! You can fly on these new Eurowings Discover routes between Calgary or Halifax and Frankfurt for 75% off! That’s right, 75% off and that’s all cabin classes. Economy, Premium Economy and Business Class. Even though they are the new long haul leisure airline subsidiary of Lufthansa, Eurowings Discover’s A330 aircraft have lie flat business class seats and a decent looking premium economy cabin. With this month’s deals you can fly on these two new routes for only 15,000 miles in Economy Class round trip (reg. 60,000 miles), 20,000 miles for Premium Economy (reg. 80,000) or 28,000 for Business Class (reg. 112,000 miles). It’s not a glamorous business class like what you find on Qatar Airways but for only 28,000 miles on a long haul European flight? Take it if you can! Here’s wishing you could still convert Marriott Bonvoy points to Miles & More!

All offers need to be booked by December 31 for travel as follows:

Austrian
Travel between Montreal and six cities in Austria from March 15 to April 30, 2022

Lufthansa
Travel between Montreal or Toronto and Europe including Turkey from March 15 to April 30, 2022

Here’s a sampling of this month’s offers:

Calgary and Halifax to Frankfurt on Eurowings Discover (all classes) 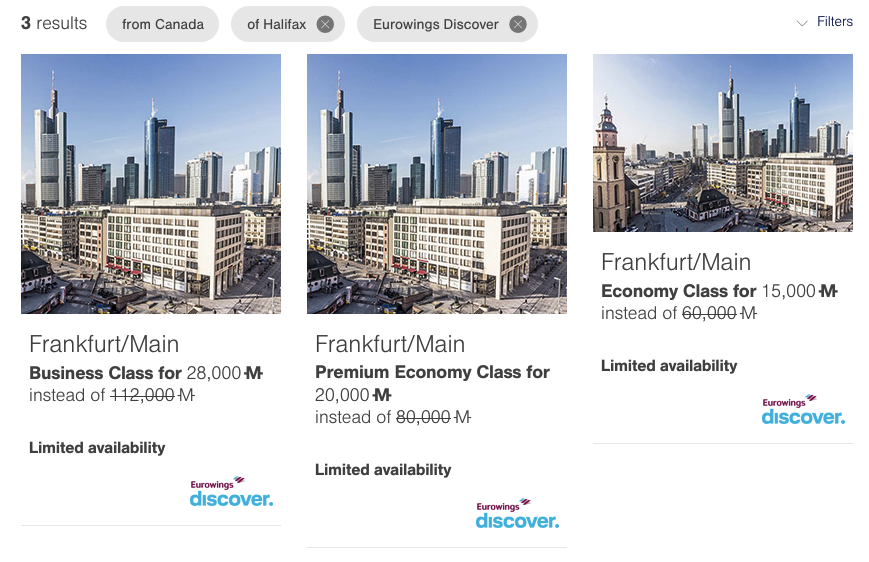 Montreal to Austria in Business Class in Austrian:

Toronto to various cities in Europe in Business Class

Going back to my comment above about wishing we could still convert Marriott Bonvoy points to Miles & More – if we still could I would have seriously considered the Eurowings Discover offer to fly from Calgary to Frankfurt for those 28,000 miles (69,000 Marriott points). Alas that option ended a few years ago but there is one hotel loyalty program you can convert points from and that’s Radisson Rewards. The conversion rate is terrible, at 10 to 1, which means you need 280,000 Radisson Rewards points to get the 28,000 points required for the Eurowings business class redemption. With a value of 0.5 to 0.7 cents Canadian that’s $1,400 to $1,960 in free hotel nights. Paying $1,400 to $1,960 for round trip business class isn’t a bad deal but you’re still going to have to pay taxes and fees on the Miles & More award ticket so the value in converting is quickly eroded.

That means the best option here is if you are already a Miles & More member who has been collecting miles and have enough in your account to take advantage of these offers. Or close to enough miles and can convert some Radisson Rewards points to get you over the hump.

Click here for more details on this Miles & More offer