We continue to see Air France KLM Flying Blue’s Promo Rewards feature
cities in Canada! This is the third month in a row that there are
Canadian cities, well this month a city with discounted reward flight offers. For the
month of November you can book Flying Blue reward flights in economy class
for 25% off out of Montreal.


If
you are unfamiliar with Flying Blue Promo Rewards, they are a limited
time offer that sees flight rewards discounted by 20 to 50% for select
flights on Air France and KLM (sometimes even Kenya Airways) and those
discounts can be for economy class, premium economy class and even
business class. The best deals by far are when they offer 50% off
business class, which we have seen many times from Canada however for
this month we only see 25% off economy class redemption options on KLM from Montreal. Of note we do see the first Promo Rewards business class discount in a long time and that is for flights out of Miami.

Even with 25% off this may or may not be
the greatest deal as Flying Blue tends to have high taxes and fees on top of the miles required for reward flights. But read on to see why it may be a good deal. When you are looking at
nearly $300 in fees alone between Montreal and Paris or over $500 in
fees for Calgary to Rome you may be better off saving the miles and just
buying those economy class tickets outright with cash. If you do
however find an economy class redemption on a date where the cash prices
are high then by all means redeem away but in our experience of
covering Flying Blue Promo Rewards your best bet is for those 25 to 50%
off business class offers!

Here are the details of this month’s Canadian offer: 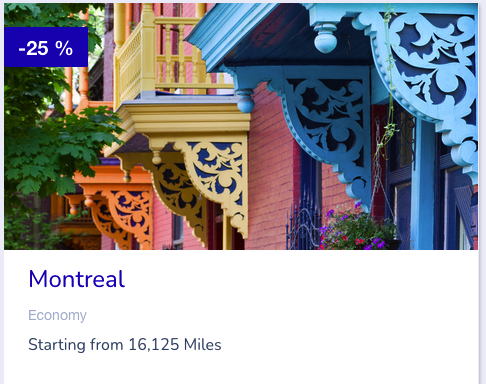 November Promo Rewards – Save 20%
to 50% on the Award Miles usually required for an award ticket.
Destinations vary by each promotional period. Click here for more details  Book by Nov 30, 21 for travel until Apr 30, 22

In
the past when we posted about AF KLM’s Promo Rewards we discussed how
the best way to earn Flying Blue miles for these flights was by
utilizing the Marriott Bonvoy™ American Express® Card as
Marriott Bonvoy points can be converted to the Flying Blue program.
That option remains however if you have followed Rewards Canada since at
least the middle of August you’ll know that Flying Blue has now
officially joined the ranks of being an American Express Membership
Rewards partner.

That
means cards like the Cobalt Card and the Platinum Card‘s points (just
to name a few) can be converted directly to Flying Blue at a 1
Membership Reward point to 0.75 Flying Blue Miles ratio. Yes that’s not
as attractive ratio as Aeroplan or British Airways which happen to be 1:1
however when you take into account these Promo Rewards that difference
can be quickly eroded and in fact be better with these Promo Rewards.

Normally I’d post a new example here but am taking last month’s example as it looks like they forgot to load the offers into their actual system (same thing we saw in September) so we have reached out to AF KLM and will update this post once the new offers are working. 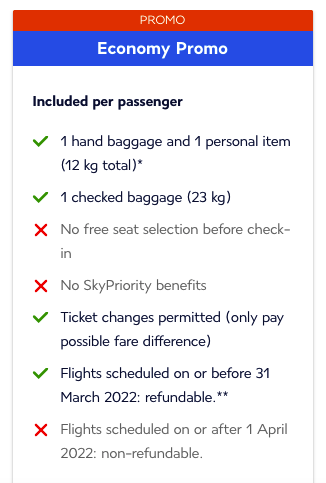 Now
this cash fare price is the lowest economy fare which doesn’t include
your first checked bag – the award flight does and IIRC Air France you
are looking at around $90 to check one bag each way. Maybe one of our
readers can confirm this for us. Anyways you are looking at getting a
value of 1.37 cents per mile not including the checked bag fee. If you
include the latter you are getting over 1.9 cents per mile. That’s not
bad for an economy class flight. If you were to convert from American
Express to Flying Blue you need 43,000 Membership Rewards point for this
flight giving you about 1.4 cents per mile in value including the
checked bag fees. That’s 17,000 less than the Fixed Points for Travel
option and for comparison the best Aeroplan redemption rates for the
same dates was 66,600 Aeroplan Points plus $152 in taxes and fees and
you still have to pay for a checked bag which is another $140 ($70 each
way). I know which redemption I would take if I had to choose one to
redeem for with my Membership Rewards points.

Even
though 25% off
economy class rewards may not be the greatest deal they may just be the
right choice for some of you!
We are still hoping to see the
return of some 50% off business class offers in the near future, the first step was actually seeing a business class offer on the list time! It still surprises me that with travel numbers still not anywhere
near what they used to be that we aren’t seeing business class options
with Promo Rewards. Anyways… if
anything you can use this
post as a reminder to start planning for those future business class
flight reward flights on Air France or KLM. As we said earlier, the best
way to earn those Flying Blue miles here in Canada is now with an American Express card that earns Membership Rewards points. Also note that right now you can buy Flying Blue Miles  with up to a 100% bonus (until November 5). When you
combine the 100% bonus with 50% off business class it can provide you
with some big savings.