Big changes from American Airlines today in regards to their AAdvantage
frequent flyer program. The changes revolve around earning elite status
and AA has gone away from the model most airlines have adopted over the
past decade or so. Gone are elite qualifying miles, elite qualifying
segments and elite qualifying dollars, to be replaced by Loyalty Points.
One simple elite qualifier, Loyalty Points are earned on a one to one
basis for most AAdvantage miles earned by a member through flying,
credit card spend and earning with partners.

This is big shift away from the model most airlines are using right
now where you have to have flights or segments plus qualifying spend.
Now you can earn status without even flying one flight on AA or their
partners – you can earn it through credit card spend or partner earning.
This is something similar Air Canada’s Aeroplan did earlier this year
however they capped the non flying elites at their lowest elite level –
to achieve anything higher you do have to fly with Air Canada. Not so
with American AAdvantage. When you earn an eligible AAdvantage mile
through flying, credit card spend, partner earning you’ll earn 1 Loyalty
Points for that mile. Most mileage earning activity appears to be
eligible including elite status bonuses when flying. It is easiest to
show which miles earned DO NOT count towards Loyalty Points and those
are:

So while elite bonuses count, other bonuses do not such as the
current bonus miles offers for Hyatt stays, this is assuming hotel stay
base miles will be eligible. Right now AA has only confirmed AA dining
and shopping as eligible but they do state ‘travel’ so hotels and car
rentals should count as well. And it’s pretty obvious that buy miles
offers, hotel and credit card transfers and credit card sign up bonuses
don’t count as well, that would be too easy! They don’t even count
accelerated earn rates on AAdvantage cards so those I assume you’ll get
one Loyalty point per dollar spent in those categories.

The next question is how many loyalty points do you have to earn to reach a status level? It’s as follows:

For our U.S. readers or those here in Canada playing the U.S. credit card game if you can spend $30,000 a year on your credit card you get
AAdvantage Gold status – it’s that simple. And if you are big spender?
Yes you can get Executive Platinum by spending $200,000 on your card in
the earning year.

Now you may be asking if you can earn any level of status without
flying on American Airlines what incentive is there to fly with them
prior to earning status? That’s where the new Loyalty Choice Rewards
come in. These are the existing Elite Choice Rewards rebranded to match
the points moniker and to get these rewards you must have reached
Platinum Pro status and flown a minimum of 30 segments on American
Airlines, oneworld and/or JetBlue. Those Loyalty Choice Rewards will
remain the same as before including systemwide upgrades, bonus miles and
more. 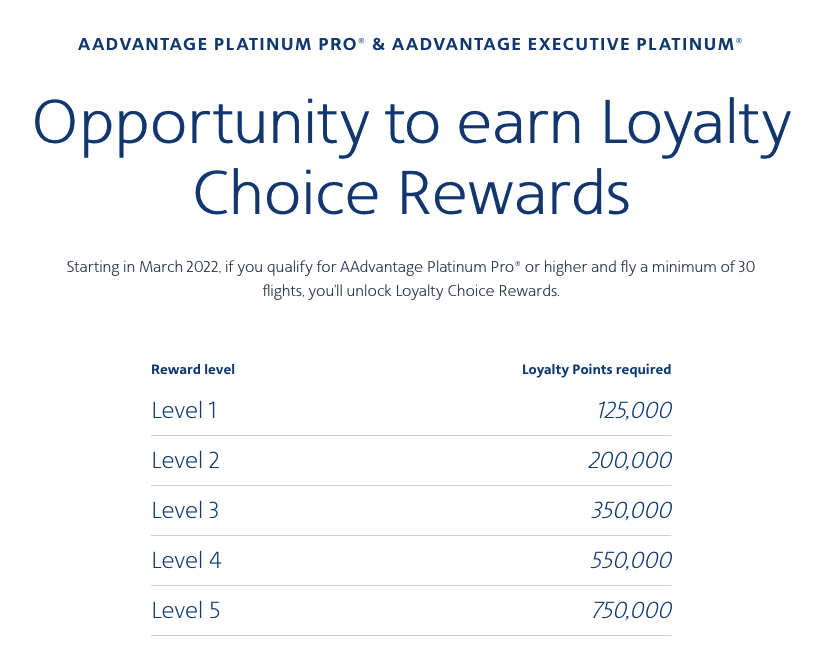 This was very interesting direction that AA has taken with elite
status qualifying. For most U.S. based non-frequent flyers this should be taken as a
very positive development in that any status level can be achieved in
the program without having to meet EQM, or EQS plus EQD requirements as the credit card route is the easiest way to achieve this.  Now it’s really too bad TD  didn’t still offer their TD AAdvantage Platinum Visa card here in Canada! Maybe this will lead to a new AA card however? Doubt it, but who knows. However for Canadians who do play the U.S. credit card game this may be something to look at. The AA cards south of the border aren’t the most popular in that game but this development may change all that as these cards just became more attractive for making it easier to get AA and oneworld status.  For the AAdvantage frequent flyer these changes are still up in the air
as to whether they are an improvement or not for them. Early
calculations show you may have to spend more than you currently do to
earn status and you have to hit that 30 segment rule to get your Loyalty
Choice Rewards.