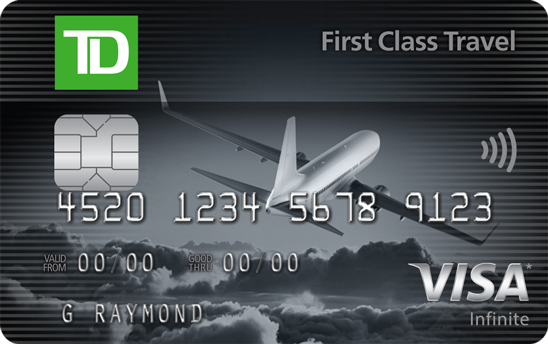 Over the course of this year we have had several articles covering credit cards in Canada that we feel are due for an overhaul. It all started out with our first post way back in January – initially we wanted to cover all five cards in that post however we wrote so much about the RBC Avion Visa Infinite Card we decided to split up the articles and now three quarters of the year later we finish off the series for this year. The fifth and final card we are going to look that we feel is in need of a revamp/update/overhaul is the TD® First Class Travel® Visa Infinite* Card.

For your reading pleasure here are the previous posts in the our 2021 Overhaul/Tweaking series:

Now let’s look at why we think the TD First Class Travel Visa Infinite Card is due for a makeover.

Let me start this off by saying it’s not that this card is terrible, no in fact it has been one of the Top 5 cards in the Travel Points category in Canada for years and for the overall travel rewards card category it does crack the top 20. What has happened however is the competition. Much of this card’s competition has become progressively better over the years while TD tweaked the card for the worse in 2015 and haven’t touched it since.

Although it does rank in the Top 5 Travel Points Credit Cards as you can see from our rankings the card has slowly fallen down in the ranks:

If the competitors continue to make their products better it won’t be long before this card falls out of our annual rankings in this category. Here’s what we think TD needs to do to keep that from happening and to give the card a chance to move up the ranks:

The card was one of the earliest to move away from the $1 = 1 mile or point model. They definitely got marketing involved when creating the card and all of a sudden it was one of the first cards to earn 3 points per dollar. But there was a catch. That 3 points didn’t equal a 3% return as most were accustomed to when calculating value. We actually see another bank utilizing that same tactic now in 2021, please read When earning 5x points isn’t the same as earning 5x points – a loyalty lesson for details on that!  Instead those 3 points per dollar were worth 1.5% towards any travel – back in the day this was really good and was the reason why the card did rank so well. You could book any travel at anytime with any provider and redeem your points against that charge and realize a 1.5% return. Even the Rewards Canada family utilized this card way back when but then the changes came in 2015 and this card lost traction. TD made a deal with Expedia for both earning and redeeming points and the latter kept the redemption value at 1.5% however the any travel anywhere option dropped to as low as 1.2%. The best part of this card was devalued. And that’s how the card has been ever since – essentially a 1.2 to 1.5% return card when redeeming for travel. Then from 2015 on, we saw the competition start to bump up their earn rates and now we have cards offering 2%, 3% and even 5% returns on select spending when you redeem via an any travel anywhere option.

So that’s what TD needs to do – bump up some earn rates which in turn helps the redemption side of things. Yes they do have their ExpediaForTD accelerator which is awesome, 9 points per dollar spent which translates to a 4.5% return if you redeem those points via ExpediaForTD. But that’s the only accelerated earn rate the card has. Much like we said for the RBC Avion Card in the first post of this series become a copy cat here – boost your typical grocery, dining, recurring bills spend. Make those 6 points per dollar so that cardholders can have a 2.4 to 3% return on that spending. That’s equal to or better than some competitors like the CIBC Aventura Visa Infinite Card but still not as good as cards like the Scotia Gold American Express Card. However the TD card would still retain the 3 points per dollar rate on all other spending which is better than the base earn rates on cards like the aforementioned Scotia Gold Amex card and nearly doubling the base earn on BMO’s Eclipse Visa cards. However you do have take the accelerated spend categories into account and that’s where the competitors can eclipse (pun intended) this card in its current form. By making select categories 6 points per dollar the card becomes way more competitive in the market especially on the any travel anywhere option and you add a little extra bonus for those who do redeem via ExpediaForTD.

The card name exudes luxury but in reality the card doesn’t really get you anywhere near first class travel. I mean technically speaking you can redeem the points for flights in First Class or for stays at Luxury Hotels but you’ll need a heck of a lot points or points+cash to do that. No outsized value here in the TD Rewards program for luxury travel.  But even the benefits – outside of the standard Visa Infinite concierge and luxury hotel service (which has only around 900 hotels in it) don’t provide the cardholder with First Class Travel. No lounge access, no credits towards seat selection or other airline fees, no NEXUS benefit, no no foreign transaction fees… I think you see where I am going here, all those benefits are seen on this card’s competitors. So what should TD do to really step up their game in this department? I would start with No Foreign Transaction fees – become the second major bank in Canada to have a card with this benefit. There still aren’t a lot of issuers providing this benefit in Canada so it is early enough that TD could use their marketing prowess to sell the benefit as a differentiator and make up for the lost FX revenue with increased card membership and purchasing volume.

Next up add airport lounge access – yes so many cards in Canada have this but when your card is called First Class Travel give the cardholders at least some semblance of that! Mimic the Scotia Passport Visa Infinite card in this regard – give Priority Pass membership and six visits per year (and jump on the Plaza Premium deal as well). And that would be it for benefits and you may ask me why stop there? Why not add even more? Well here’s why: I would keep the annual fee at its current $120 per year to compete with several others that are still pricing at that same amount but to also beat cards like the Scotia Passport Visa Infinite Card with its $139 annual fee and the BMO World Elite Mastercard’s $150 annual fee. On top of this I have one more benefit I feel they should add and if they did, it would be big. Read on to find out.

Back in the day you could convert the TD Rewards points earned on the First Class Travel Visa card to American Airlines’ AAdvantage program. However that option ended in 2011 and with it the card shifted out of our Hybrid Card Category over to the Travel Points category. Fast forward to today and maybe its time to bring the card back to the Hybrid category. This category just happens to be our favourite category and also the one we feel is best for most Canadians:

So how do you make this card a Hybrid card again? Easy, TD is the primary financial institution partner for Air Canada’s Aeroplan so bring in an Aeroplan conversion option. This would allow cardholders to use proprietary TD Rewards points as they wish via TD Rewards or they could convert them to Aeroplan. Now, unlike American Express I wouldn’t expect a 1:1 ratio seeing that the TD First Class Travel Visa Card earns 3 points per dollar (how awesome would a 1:1 ratio be though?!?) but rather I could see them implementing a 3:1 ratio if they didn’t institute the increased rates we suggest. This would make the card  a simple 1 Aeroplan point per dollar spent card with a little added bonus of 3 Aeroplan points per dollar for those ExpediaForTD bookings. With an earn rate like that it wouldn’t erode clientele from existing TD Aeroplan cards but it could and would sway those customers looking for a flexible card with multiple redemption options away from RBC’s Avion products and Amex’s Membership Rewards products. Now if TD did add accelerated earn rate categories the conversion ratio would most likely have to be 4:1 or something similar so it wouldn’t compete with their own TD Aeroplan card earn rates.

Don’t get me wrong, this card isn’t bad per se but the competition has become better over the years and the First Class Travel Visa card needs an update to level the playing field. Simply adjust the earn rates for the better, which in turn helps out the redemption side, throw in a couple extra benefits and if they really want to make the card shine add that conversion option to Aeroplan. It’s not a lot of changes but enough to make the card get noticed again.

Even if TD does or doesn’t choose to change the card in the future, right now is actually a good time to get it as the welcome bonus is the best that has ever been seen! You can earn up to 100,000 points (20,000 on 1st purchase and 80,000 when you spend $1,000 in the first 3 months) and get a first year annual fee rebate when you apply by December 5, 2021. So it may not be a bad idea to get, even if it just for that bonus and by getting the card now maybe you’d be in for surprise if TD does make the card better in the near future!

This website receives monetary compensation for the products and services you obtain through links on the site.The Toronto-Dominion Bank (TD) is not responsible for the contents of this site including any editorials or reviews that may appear on this site. For complete and current information on any TD product, please click the Apply Now button.