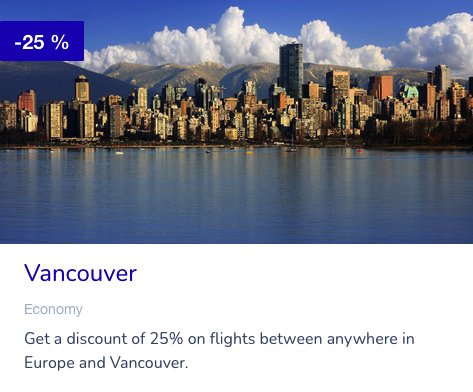 Earlier this week we had a post covering September’s Flying Blue Promo Rewards which are the discounted reward flight offers from Air France and KLM. In that post I mentioned that I could not find any of the discounted fares from Edmonton, Montreal or Toronto. I even tried Mexico City, Dubai, Johannesburg and Vancouver – all cities that are on the list to be discounted but no luck. So I reached out to Air France to see if there was an issue and sure enough we alerted to them to a mistake they had in loading the fares to their system. That seems to be all fixed now and the discounts are showing for the Canadian cities being offered for this month.

I won’t go into as much detail as my post from earlier this week but I did check out several routes like Montreal to Paris and Toronto to Paris and both were showing availability. As is Vancouver to Amsterdam which I decided to feature in this post. Flying Blue normally charges 24,500 or more miles to fly one way for this route:

And with the Promo Rewards discount of 25% now being loaded in their system it’s pricing at 18,375 miles each way:

For comparison here is the cash outlay required for the same flights:

$921.41 in total so is it a good idea to redeem points for this flight or just pay cash? The 49,000 Membership Rewards points cover $666 of the flight since you still need to pay the taxes and fees. 49,000 points for $666 equates to 1.36 cents per point and if we take into account the American Express Cobalt Card‘s earn of 5x points per dollar you are looking at a 6.8% return on that spending! You can essentially get this flight to Europe for under $10,000 in eats and drinks spending. That’s not bad at all. Of course you can do better when we see 50% discounts on either Economy or Business Class but this isn’t bad redemption at all if you are someone who does take valuations into consideration. 49,000 Membership Rewards points is also less than the 60,000 that would be required using Amex’s Fixed Points for travel (And if you read the post from early this week you’d know it also had the highest amount of fees!) and flights with Aeroplan on these same days are running around 76,000 Aeroplan Points (so 76,000 Membership Rewards points) with about $185 in fees. That puts AF KLM with $70 more in fees but 27,000 less points or no less than $270 in value.

I know when American Express announced the conversion option to Flying Blue there were a lot of naysayers that said the 1 to 0.75 ratio is terrible and the partnership is worthless but from our post earlier this week and even more so with this one you can see that in fact it’s not terrible at all and that’s what we are here for – to help educate and show you that even ratios like this can work in your favour. Would it be nice for 1:1 transfers? Of course it would be and then these Promo Rewards would be even that more valuable but that’s not our reality right now. And like I mentioned in the last post, if anything you can
use this as a reminder to start planning for those future business class
flight reward flights on Air France or KLM when do come out at 50% off!