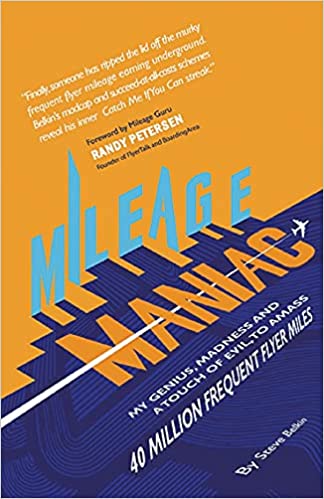 Since the inception of frequent flyer programs in the early 80s there have been very few mileage and points stories that garner the attention of the world. Whether it is The Pudding Guy who has been enshrined in Adam Sandler’s Punch-Drunk Love or George Clooney playing Ryan Bingham in Up in the Air who is trying to break the 10 million mile mark in the American AAdvantage program, the mainstream coverage of making the most of frequent flyer programs is pretty minimal. It seems like we get some story every few years (like The Great Canadian Mileage Run by the now fallen from grace Marc Tacchi) but one story other than the pudding guy that always seems to re-emerge is the Baht run. Made famous by Steve Belkin the Baht Run and many of his other mileage travel hacking records are often referred to as to crown jewels in finding that elusive loop hole to earning a ton of miles. Well rather than have other people write about him Steve has put pen to paper and wrote a book about all his amazing mileage earning journeys over the past few decades.

We here at Rewards Canada received a copy of the book to review and here is a quick overview without giving everything away!

Steve’s story starts out in 1988 with his Gobble-Gobble run – achieving lifetime status with United MileagePlus in the span of 6 days during American Thanksgiving. I love this story not so much for the actual mileage and status earning but for what travel used to be like and how lenient the airlines were in terms of who flew under what name, how they awarded miles and such! Those days are definitely long behind us!

The mileage escapade that brought Belkin the most attention is the well known Baht run and we get to deep dive into the intricacies of this story over a couple of chapters in the book. It was so named after Thailand’s currency as this mileage earning effort took place in Thailand. And Steve didn’t do the flying. He hired 100 local farmers and disabled masseuses to fly a total of 2,000 flights to earn him enough miles for nearly 100 business class flights, a swathe of system wide upgrades and Super Elite Status many times over. This is the famous story that also got him on the radar of the U.S. Drug Enforcement Agency, had Thai Airways pilots and flight attendants not wanting to work the flights and much much more.

Then there was the famous Inside Flyer Magazine subscription promotion from the early 2000s. This was mileage guru Randy Peterson’s print magazine for frequent flyers and to boost subscriptions they had a promotion that offer 2,500 SPG Starpoints for each $60 subscription. I even subscribed to it and grabbed one subscription to score those points. What was discovered however was that you weren’t limited to just one bonus – you could get the points on multiple subscriptions and this became the go to travel hack at the time to buy multiple subscriptions to earn enough Starpoints to convert to Qantas to redeem for flights on British Airway’s Concorde. It simply took 20 subscriptions worth $1,200 to earn enough points to fly on the Concorde. $1,200 was a steal for a ticket that cost around $10,000 at that time. How many subscriptions did Belkin buy? 1,600. That’s right 1,600 to end up with 4 million Qantas Frequent Flyer points but not to use on Concorde but instead for 45 international business class flights on British Airways and 40 domestic economy class flights on American Airlines.

I knew of Belkin through the online forum FlyerTalk but what I didn’t know is just how many of these mileage earning opportunities he partook in! Some were taking advantage bonus miles offers (One can hope he visited our global site FFB to learn of some them) while others like the Baht run simply exploited cheap fares to earn miles and status – and all done so within the rules of the programs. One could almost thank him and many other FlyerTalk members for frequent flyer programs looking harder at their T&Cs and changing them to protect themselves from such endeavors!

The book is a really fun and easy read – I feel it may have been rushed to press as there are some typos (I’m one to talk though as I am the king of typos) and some lines and sentences repeating but overall it’s well written and written in such a way that both mileage beginners and experts alike will enjoy it. Plus the book is only around C$10 to purchase a paperback version and less than that for a digital edition. A lot of the stories bring back memories of when I first started Rewards Canada back in 2001 and was much more active on FlyerTalk. I would read the posts by Beaubo (Steve Belkin) and others on these mileage earning stories, learn from them and become mileage millionaires ourselves.  For me, just like I mentioned above, I would say the book is less about the 40 million miles but more about the thought process and methodology used to earn those miles and elite statuses. It definitely gets the wheels spinning in your head as to how, what and where the next big opportunity will come, if ever such an opportunity does arise again. At the very least it should get readers thinking on how they can make the most of their frequent flyer, frequent guest and other loyalty programs – within the rules that is! Most programs can still provide amazing value, perhaps not as easily as years gone by but the opportunity to travel in ways that would otherwise be unimaginable for many people is still there.

The book is available for purchase in paperback form or as a Kindle eBook from Amazon.ca here or on Chapters Indigo as a Kobo ebook only