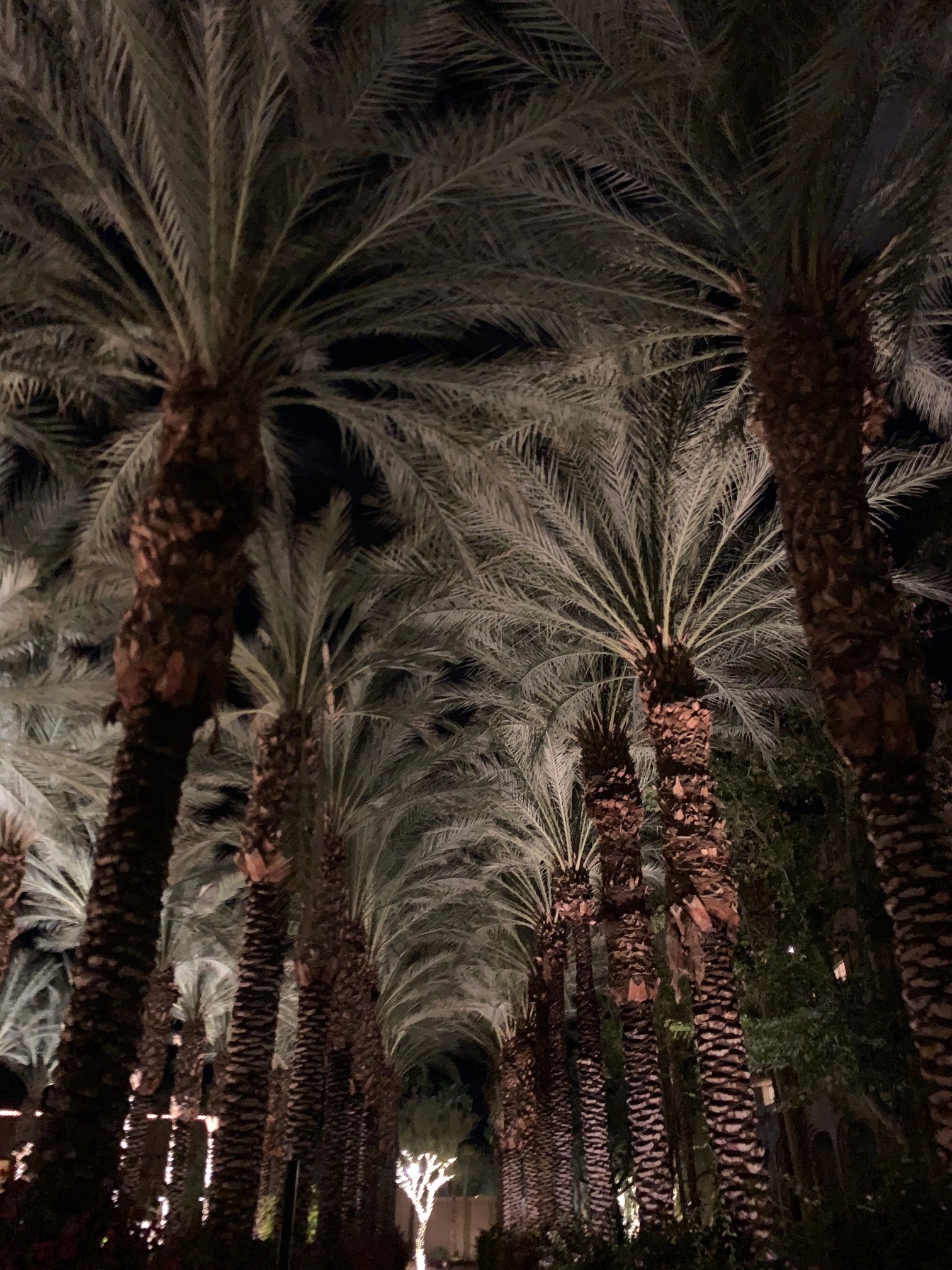 The Rewards Canada family took a last minute vacation back to the Palm Springs area during the high season (right after Christmas) and hotels were at a premium. When we travel we always get two rooms now as a room with two queens and one bathroom just doesn’t cut it for two adults and two teenage daughters. In many cases this means paying full price for two rooms or at the very least full price for one room and up to 50% off for the second room.

Rewards Canada Tip:
The 50% off for the second room typically isn’t advertised by hotel chains as they know in many cases when you are booking online you think you have to pay the full price and do so. Case in point is Hyatt Hotels – when you book online you won’t find family rates that offer 50% off the second room but if you call Hyatt reservations and specifically ask for the family rate for multiple and/or connecting rooms they will give you the discount. Now this could vary by location but it has worked for us at a few different hotels.

Having this in mind and seeing what places like the Ritz-Carlton Rancho Mirage were asking per room we decided see what we could get a two bedroom villa for at the Hyatt Regency Indian Wells Resort & Spa. We had stayed there earlier in the year (read the review here) and loved the resort and even though we’d have loved to try somewhere new this resort beckoned us back with decent pricing for a two bedroom villa. So we had it booked once again and I’ll say it’s not cheap but getting a whole two bedroom villa for less than two 2 queen rooms at the Ritz or other higher end hotels in the area I consider it a deal.

Now when booking I did see two bedroom bungalows listed as well and thought to myself that’s weird, I don’t recall there being two bedroom bungalows when we stayed there about 8 months prior. Turns out two bedroom bungalows is something new the Hyatt Indian Wells is trying out. They are the 600 series of renovated villas that we were in during our first stay. Makes sense why they were newly renovated at the time as that was part of the plan of the new ‘bungalow’ rate option. So what exactly is the difference between a two bedroom bungalow and a two bedroom villa? Outside of being renovated nothing at al. They are the same size and have the same layout. The difference comes in what is offered with the bungalow. When you book a bungalow you’ll get the renovated room plus daily valet or parking fee, the resort fee, bungalow host
gratuity, daily housekeeping gratuity, and a $300 daily resort credit
redeemable at any property food/beverage outlet, Agua Serena Spa, Camp
Hyatt and the Indian Wells Golf Resort. The ‘Villa’ option doesn’t have the $300 daily credit, fees covered etc. However when I was booking the ‘bungalow’ rate was $700 more per night than the ‘villa’ rate. Now, even if math isn’t your strong point $700 per night for about $400 worth of credits doesn’t seem like a good deal. So that settled it for us – a villa suite it is! Just so you know the villas still have the butler service as we detailed in our last review which is no longer called butler service but rather a dedicated host service. The difference is that you’ll have to tip as the ‘bungalow’ rate includes the gratuity.

We arrived to the Hyatt in the early evening as we took one of WestJet’s later in the day YYC-PSP flights and were able to get the keys to our villa right away. You may recall from my last review that wasn’t the case for our first stay! We were now assigned a 700 series villa which are the non-renovated ones and weren’t sure what to expect as we hadn’t seen them before. We made the 5 minute or so walk to our villa as we wanted to avoid using the dedicated host golf cart service not to mention it is nice to walk about when it 18 degrees C outside when back in Calgary it was much colder!

The villa we were assigned was actually two separate rooms – a one king room attached to a one bedroom villa when combined made it a two bedroom two bathroom villa. Obviously these ones can be sold as separate rooms if need be. This was one difference we noted over the 600 series villa we had before – it was a true two bedroom as it could not be split. That being said the layout and size of 1,350 square feet are exactly the same and we just had to enter both rooms separately to begin with and open up the connecting door. We never used the entrance to the one king room after that.

This villa was definitely a throwback! It felt like we were back in the 70s and 80s! The decor was kitschy but we loved it and thought it was awesome. The colours may not have been as bright as a renovated room but honestly it felt as comfortable as the renovated one although it show some wear and tear. Perhaps Hyatt will renovate these soon to take away the worn feeling. Don’t get me wrong – they don’t feel that warn, they are totally acceptable and we even said that if we come back we’d be totally happy staying in one of these older villas. Take away the flat screen TV and updated microwave and you wouldn’t think it was 2019 in these photos of the living room: 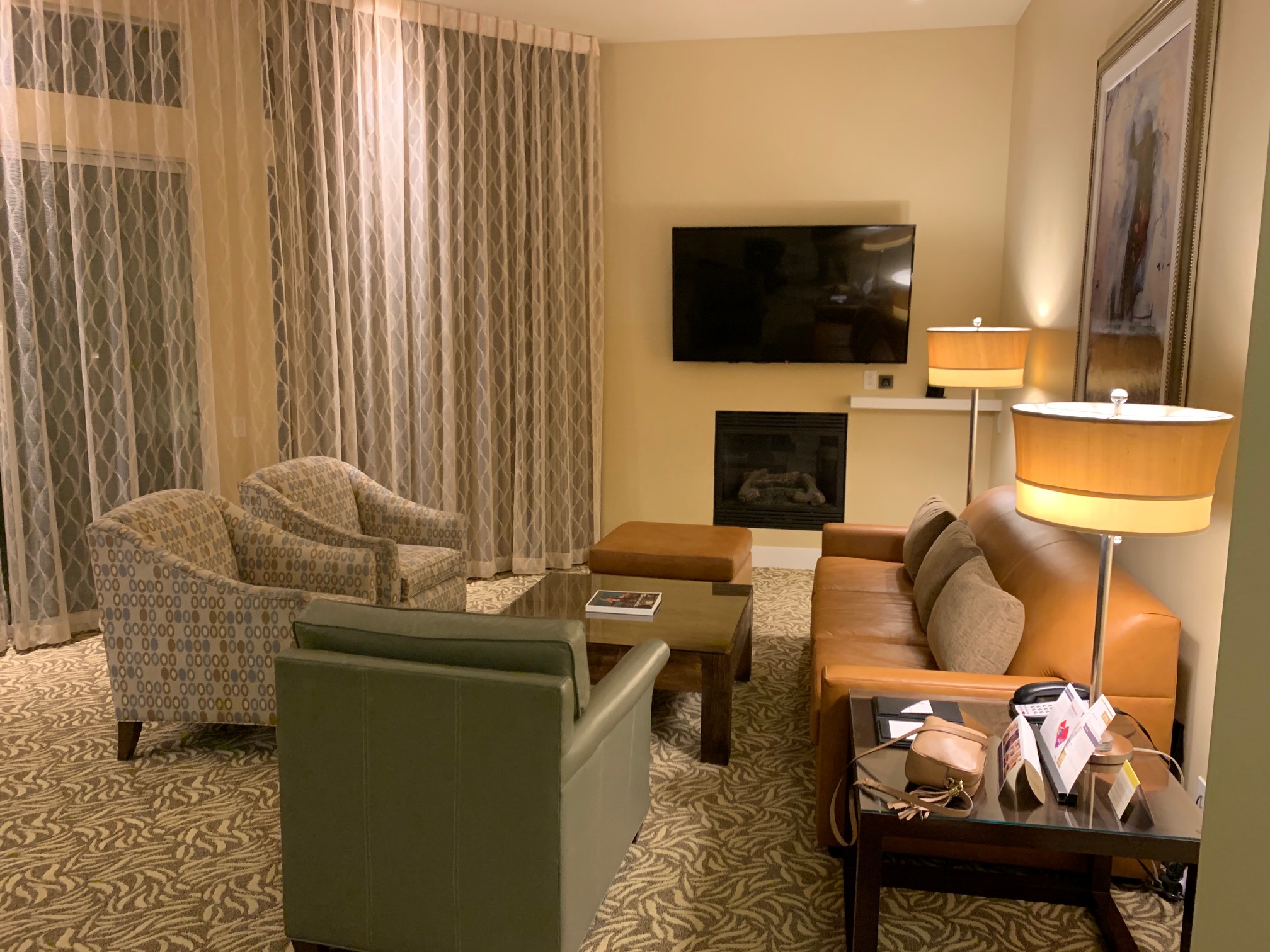 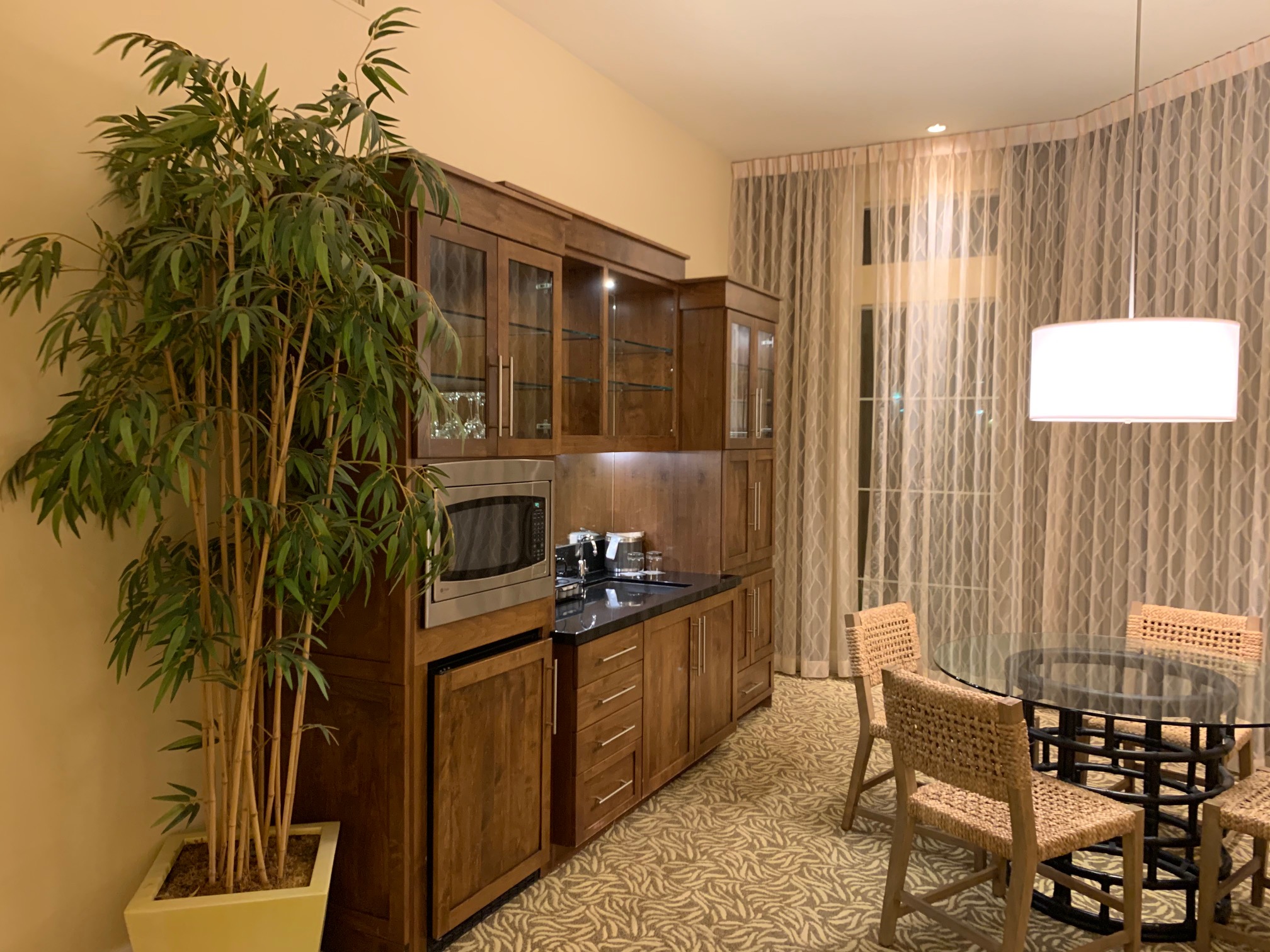 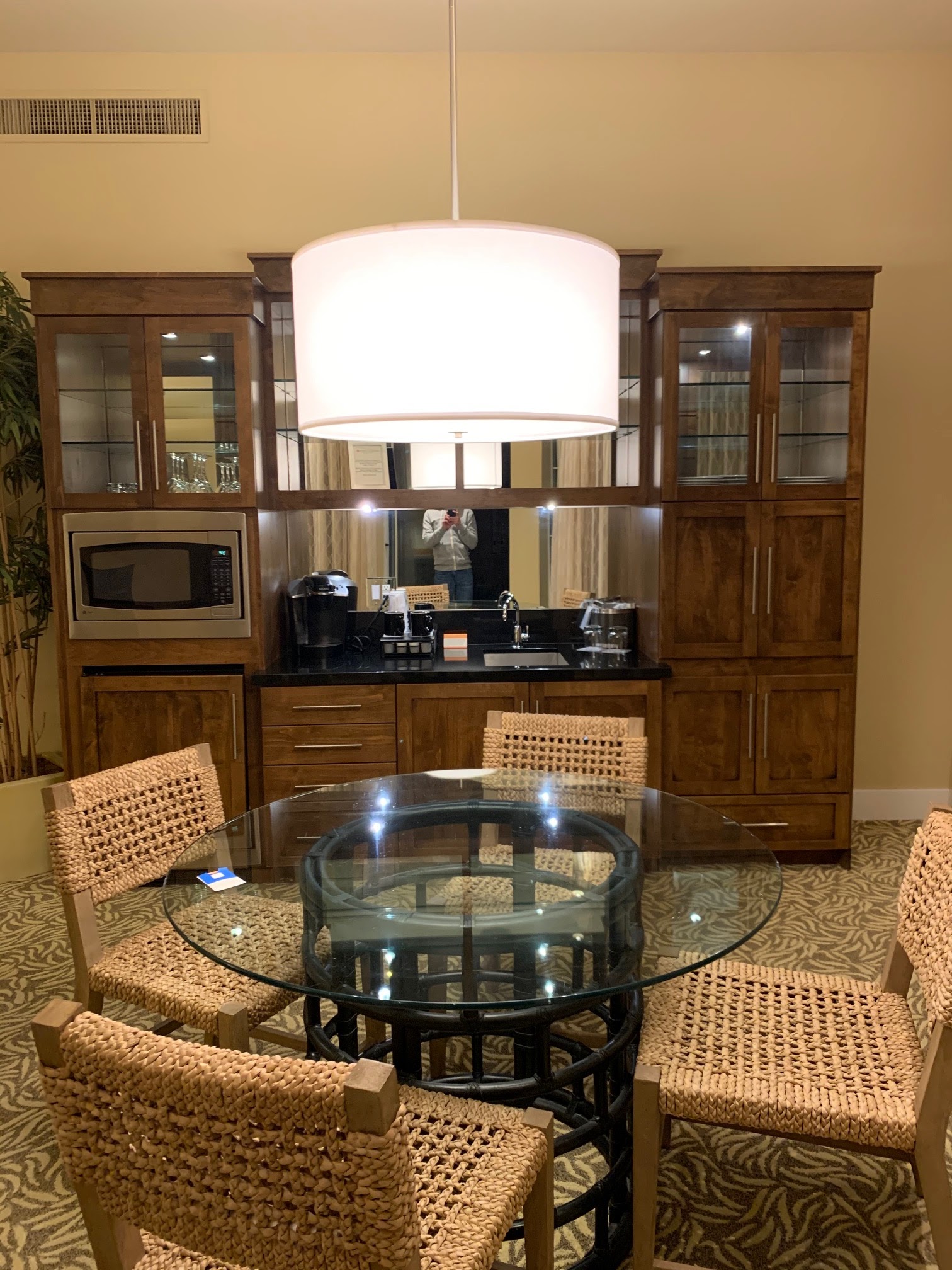 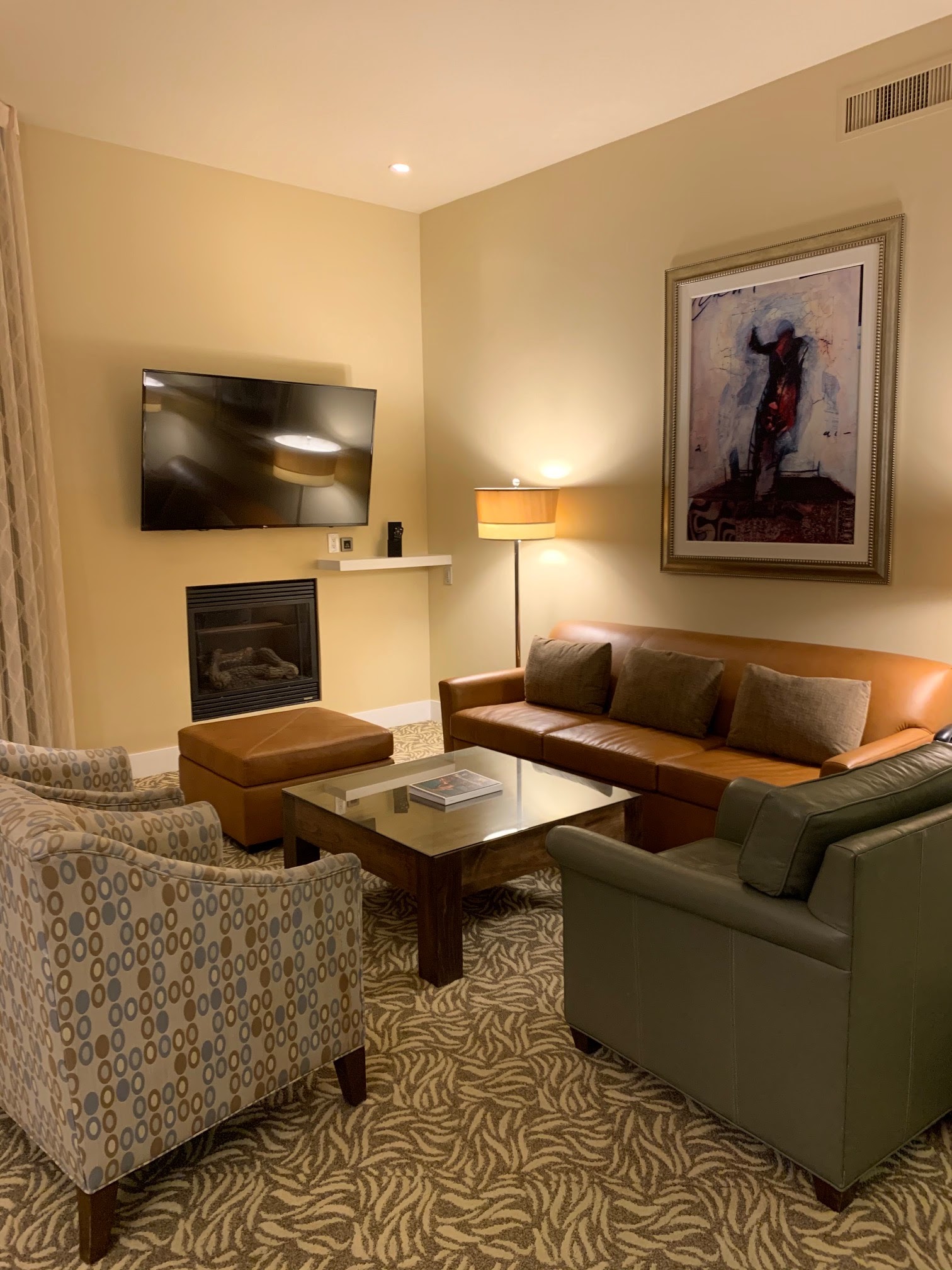 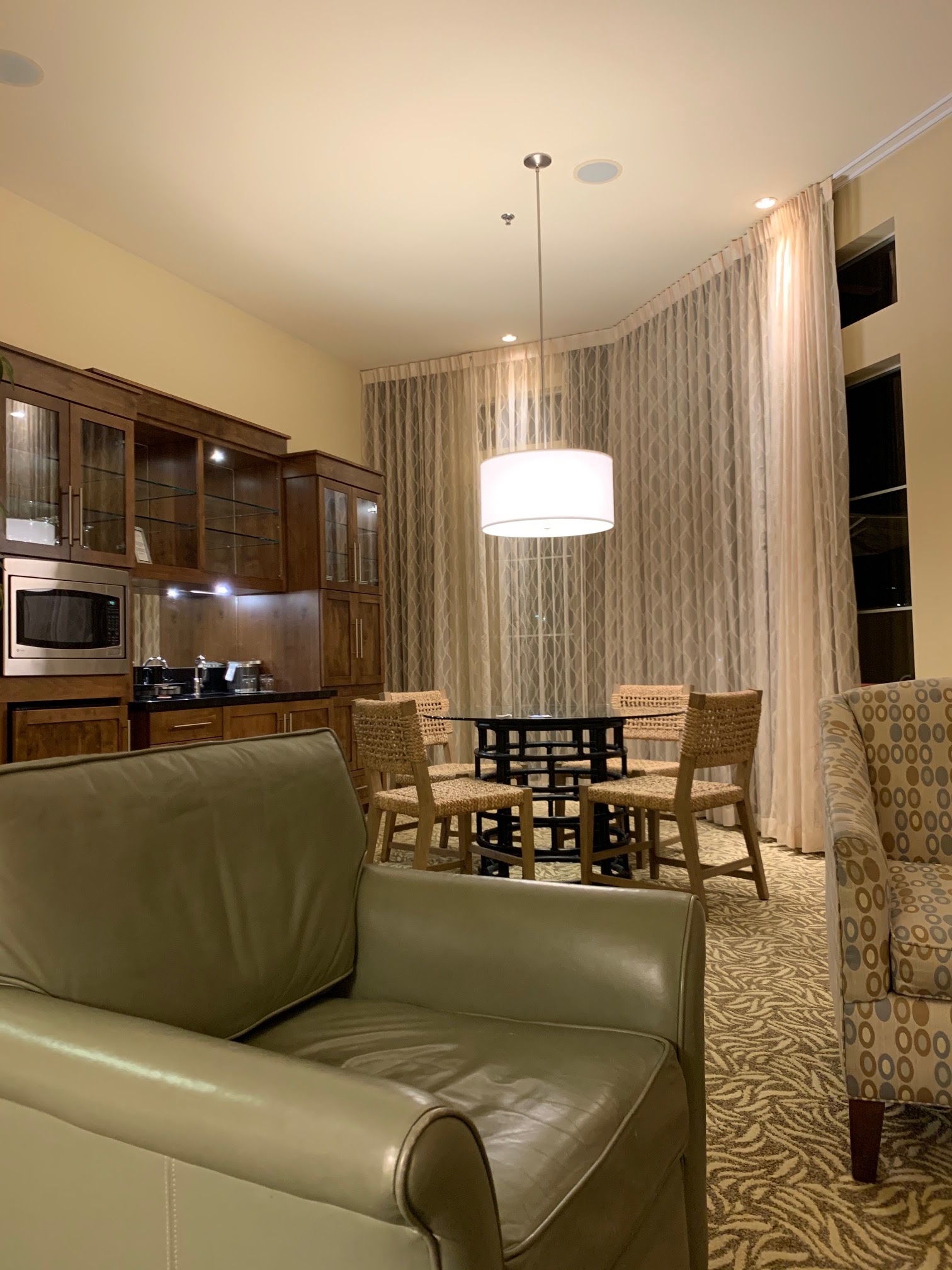 Overall our villa had two king beds, two full bathrooms each with double vanities, separate shower and tub and separate WCs. The living room as you can see from above featured a dining table, sitting area with chairs and a pull out sofabed. The villa also has its own private yard space with chairs to sit in, an outdoor dining table and of course a hot tub!

Here are the photos of one of the king rooms that were part of the villa: 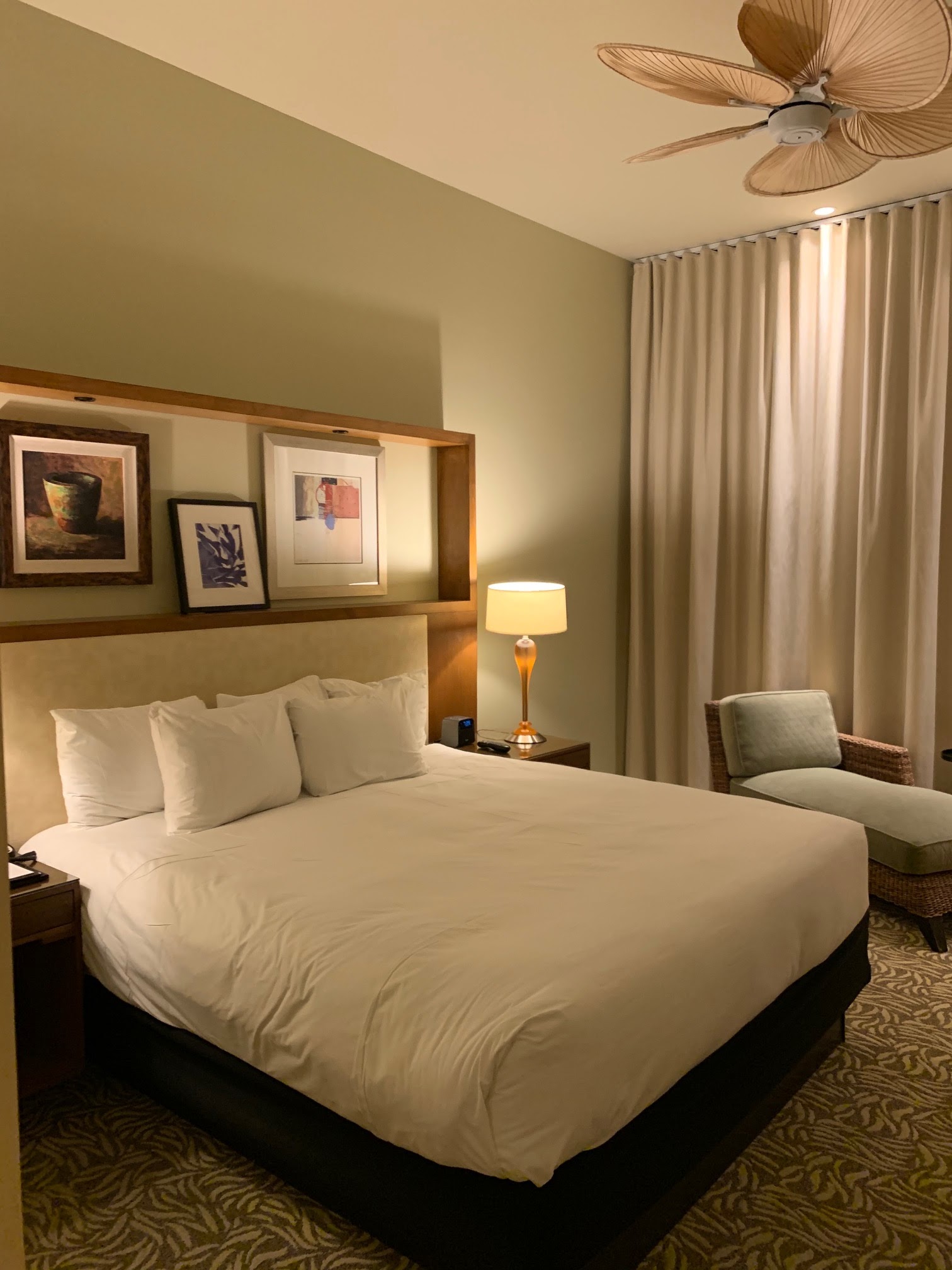 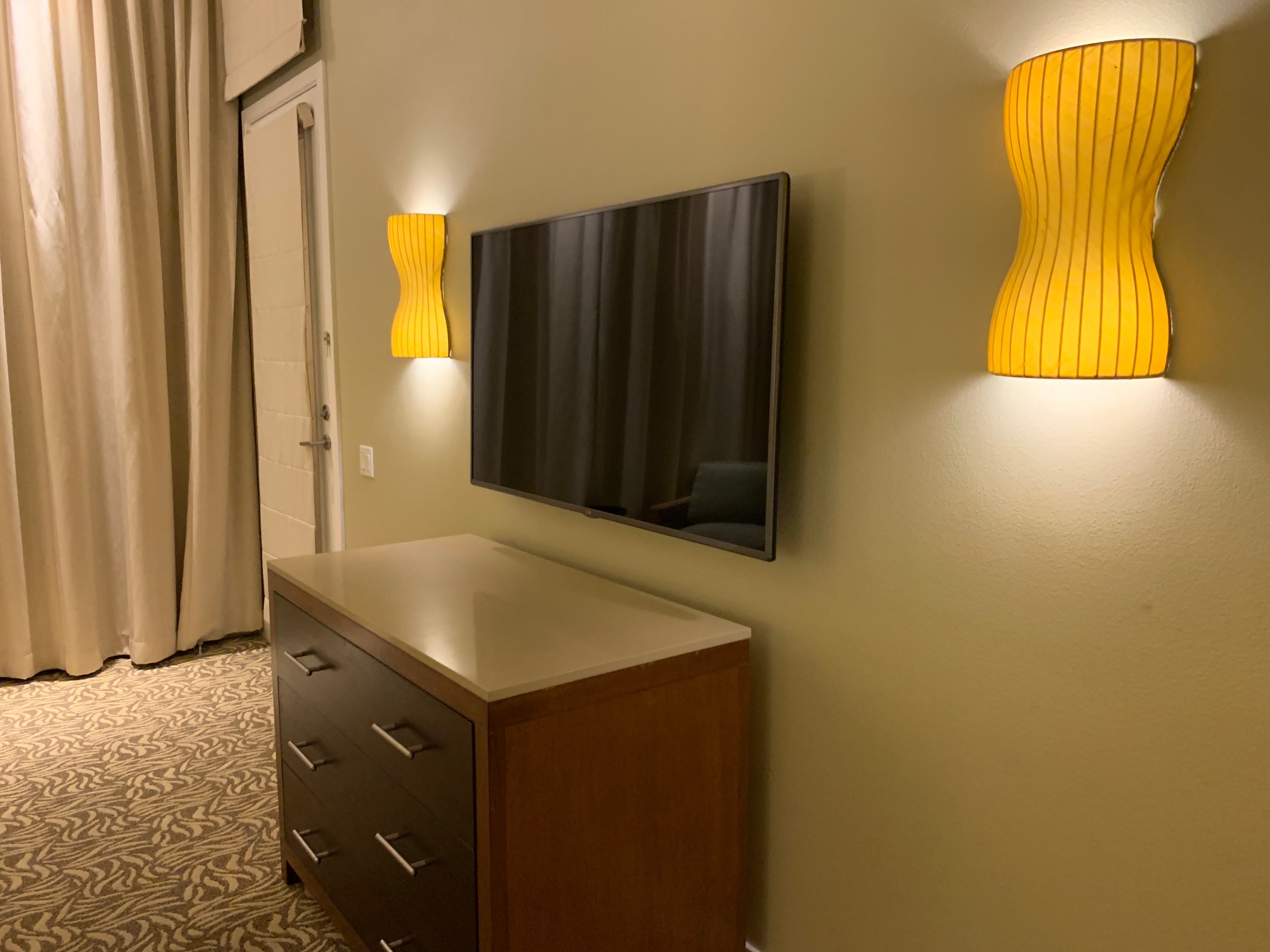 The bedrooms provide a lot of room and we find the beds here to be really comfortable. We don’t spent a lot of time in them but it is nice to have all that space so that you can utilize two luggage racks in each room.

And one of the bathrooms: 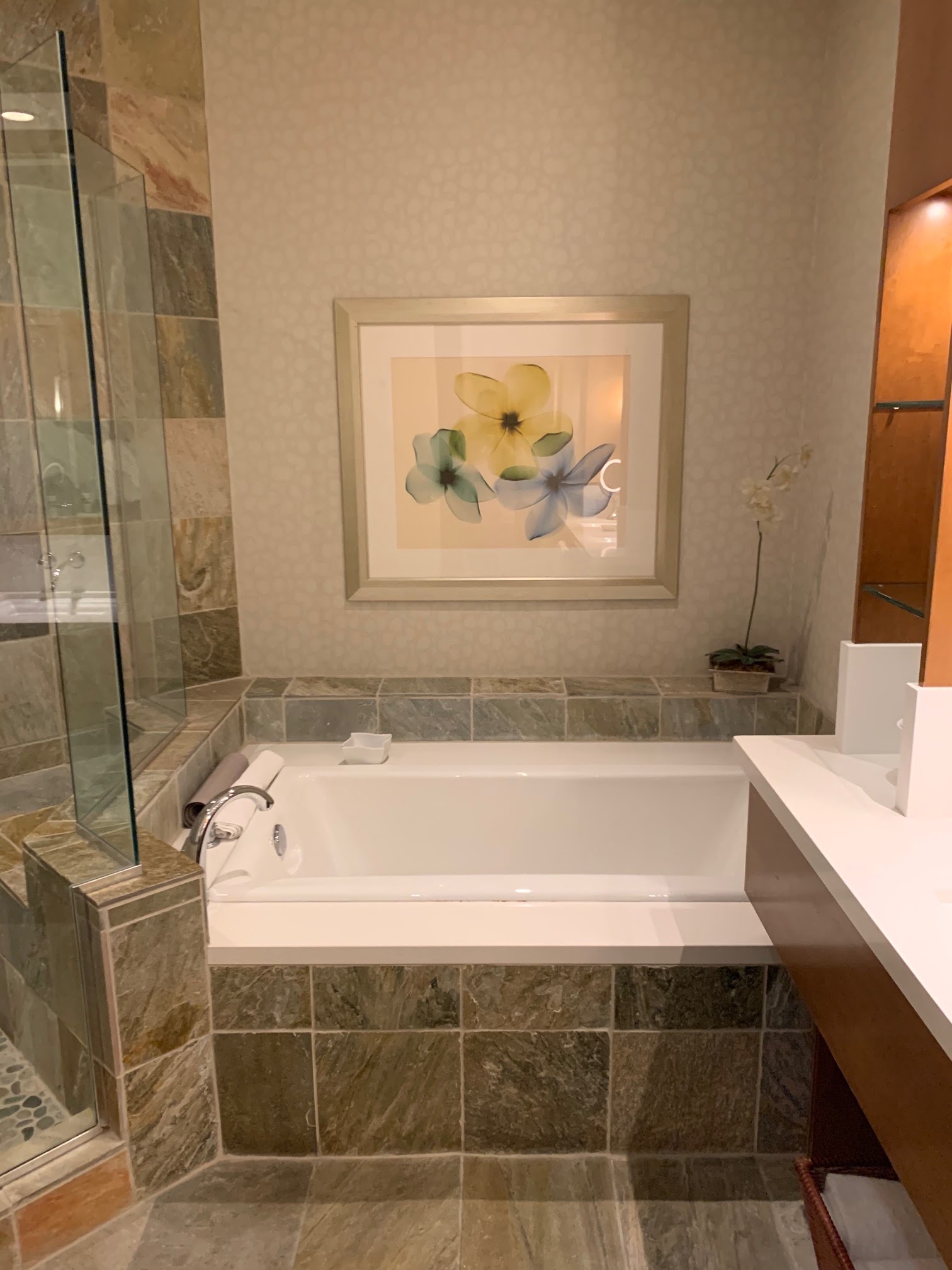 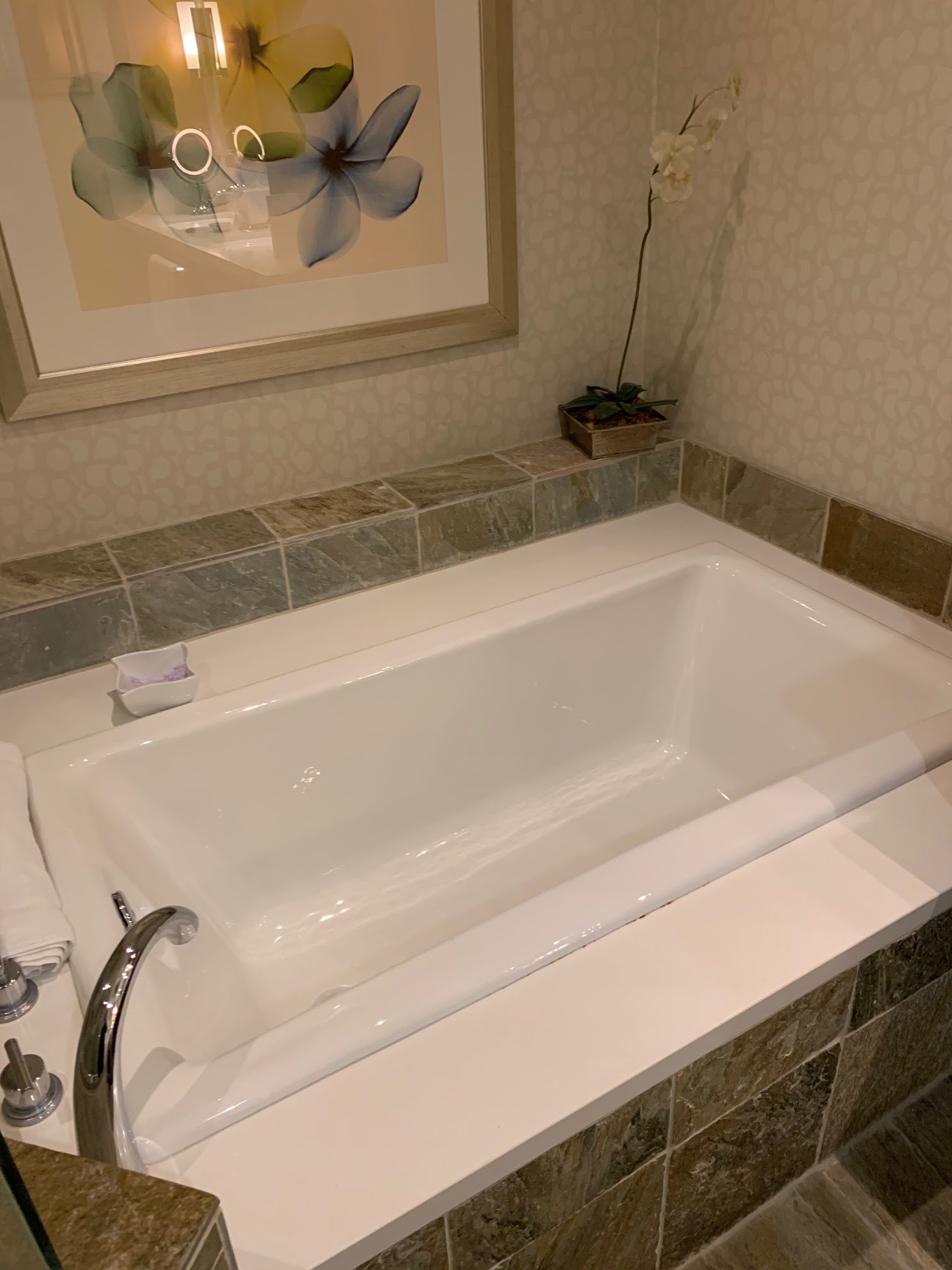 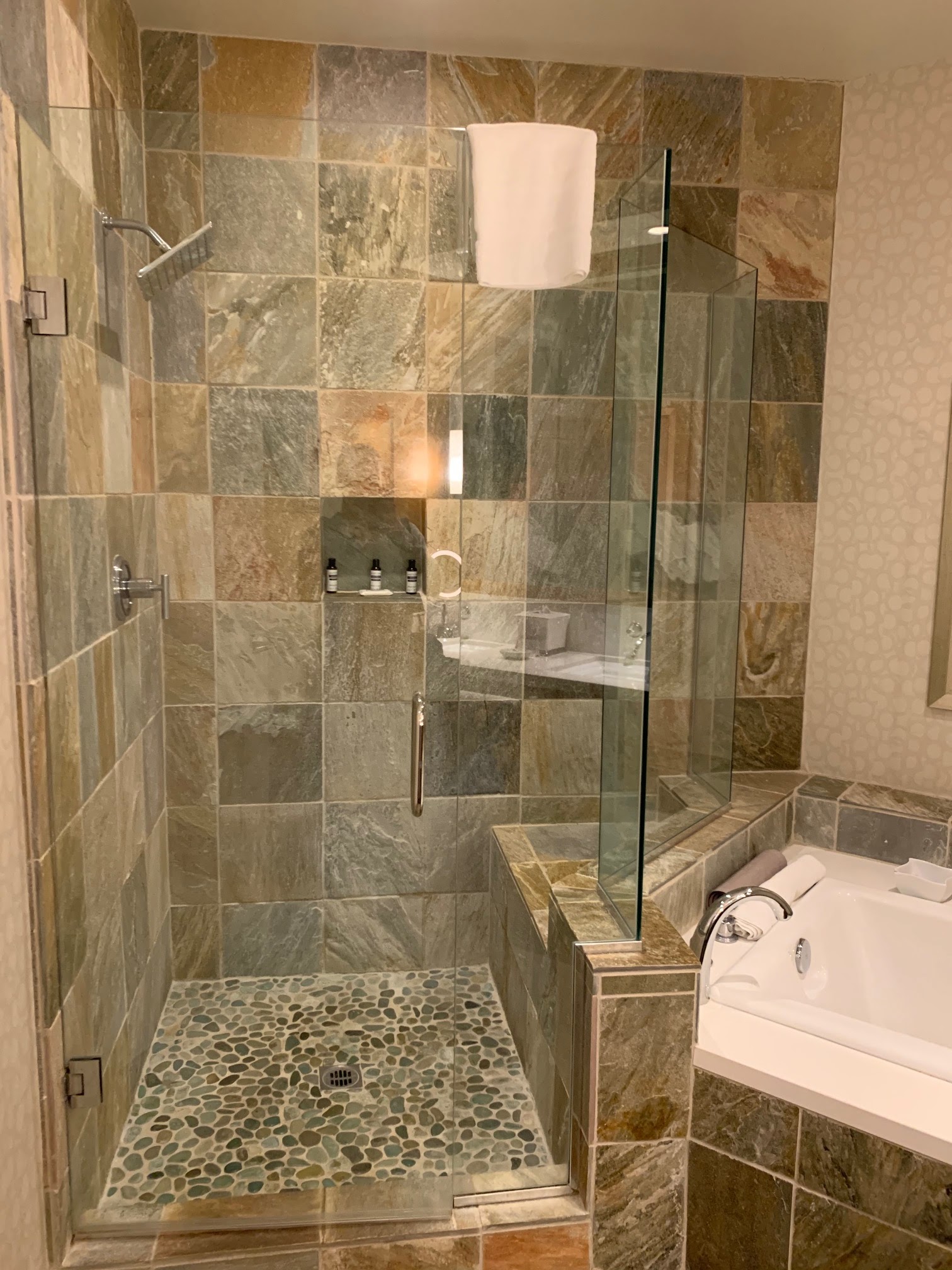 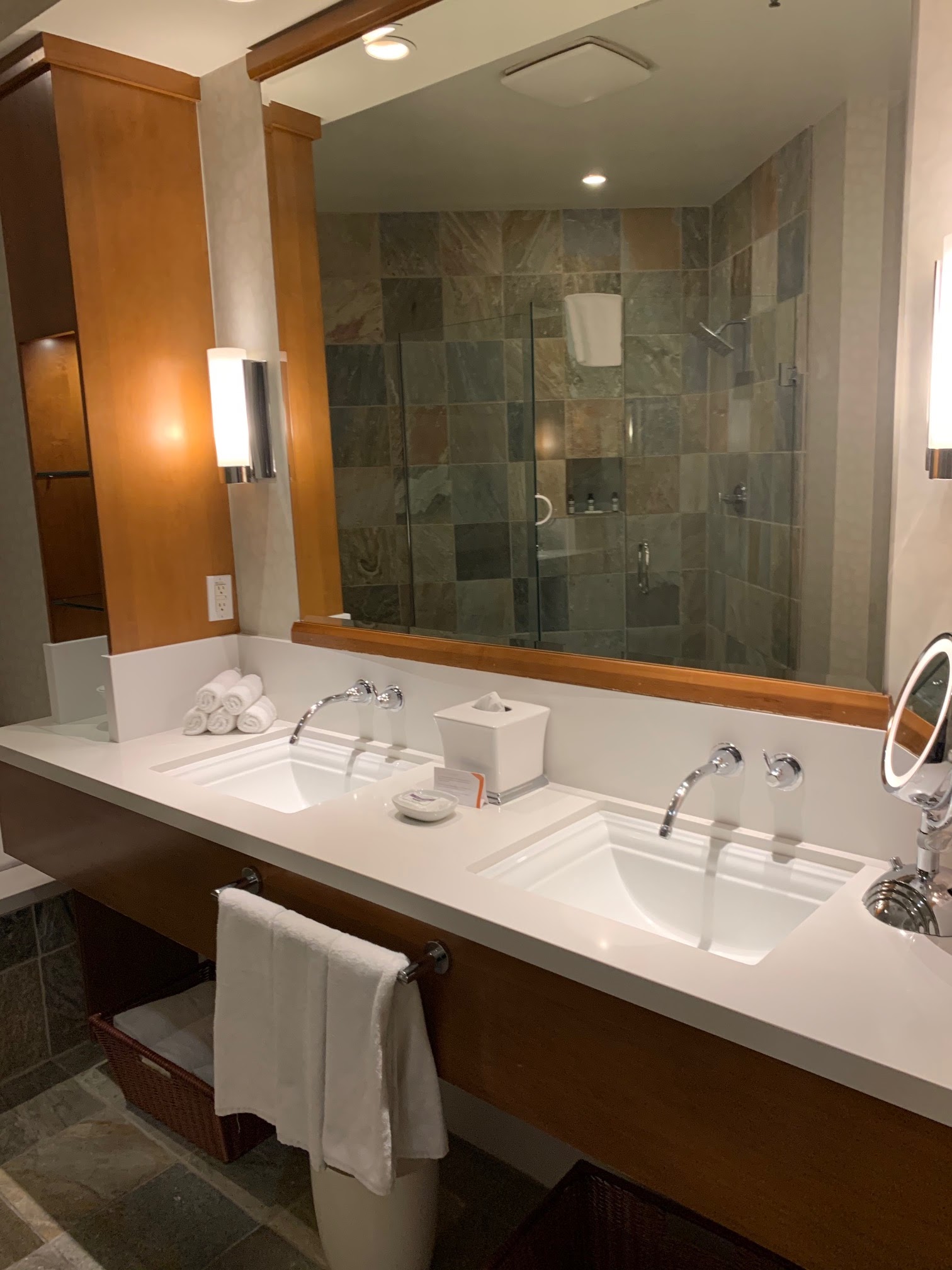 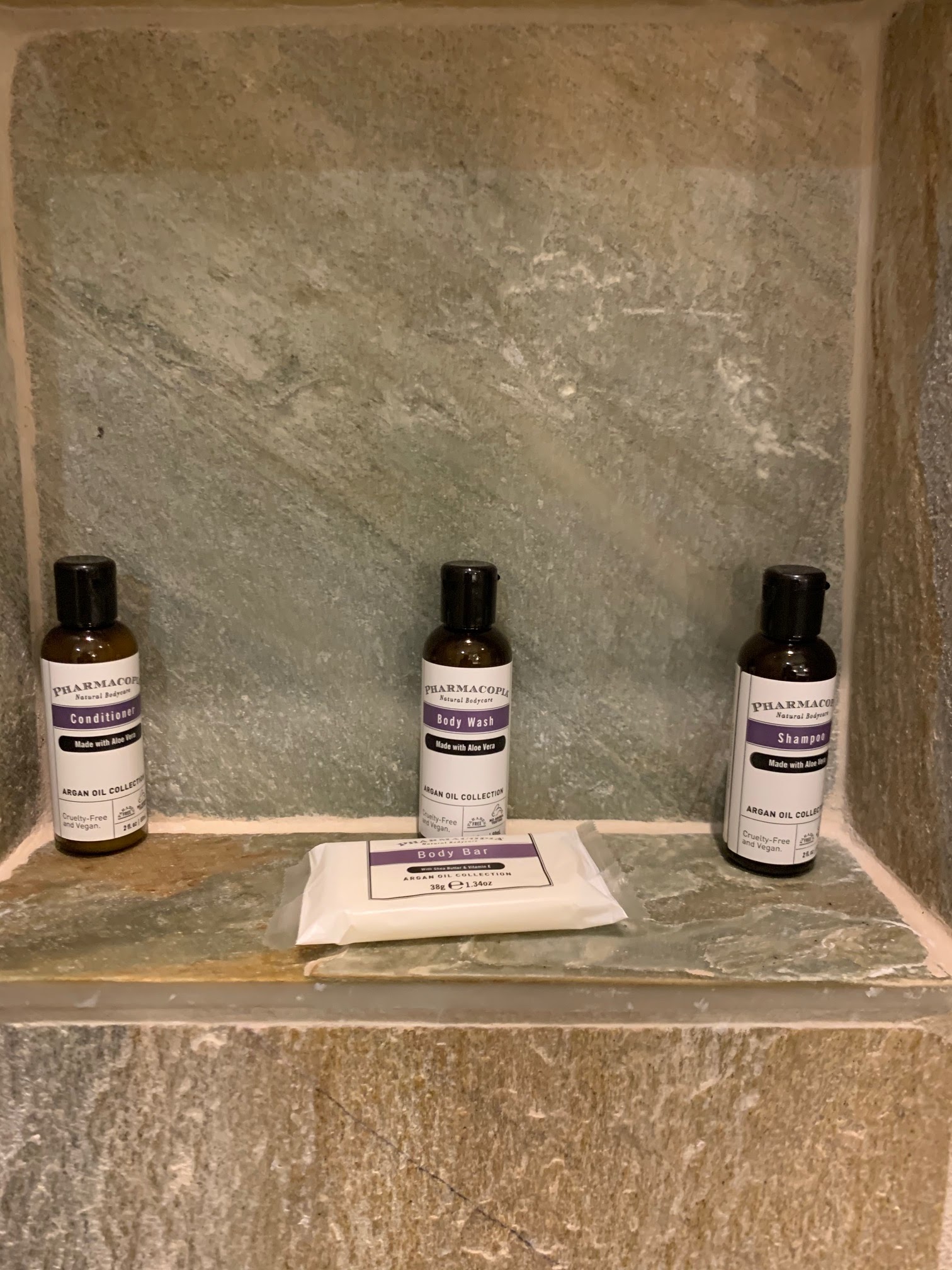 If you checked out the review from our first stay you’ll notice the difference between the bathrooms as well. These ones were totally fine despite the aged look and colour scheme. There was definitely some water pressure issues (I’d give it 4 out of 10) and temperature as well.  Sometimes it took upwards of 5 minutes to get hot water from the shower and sometimes it would just be warm. That didn’t occur at the other villa we had before. Now each villa is part of a bigger complex of four villas so perhaps this set of four is due for a new boiler – that is if that’s how the complex works.

The bonus of this villa and other 700 series villas is that you get the updated hot tubs! These ones have a waterfall which any kids (and parents) will love 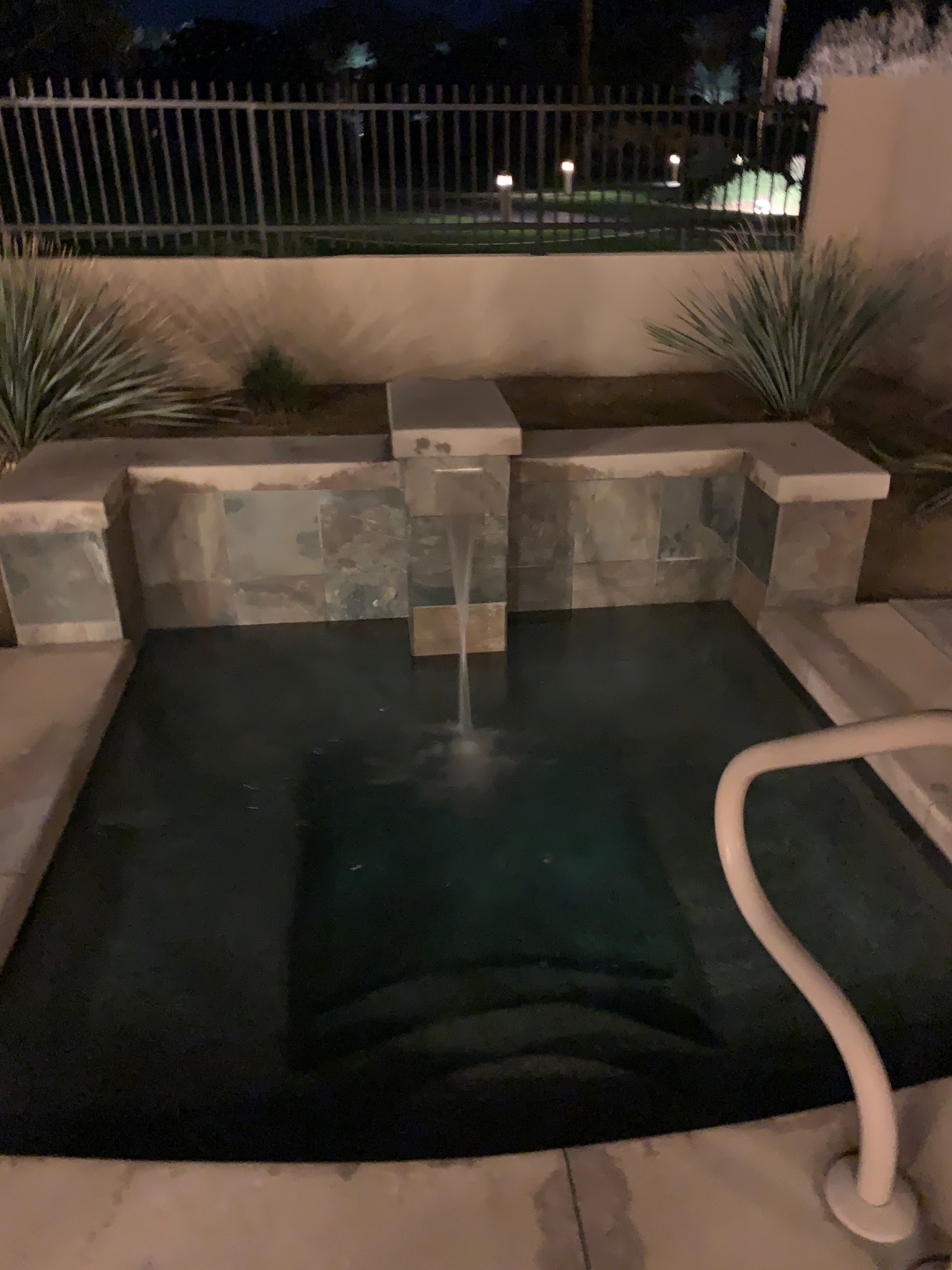 Compare this to the 600 series hot tub we had before 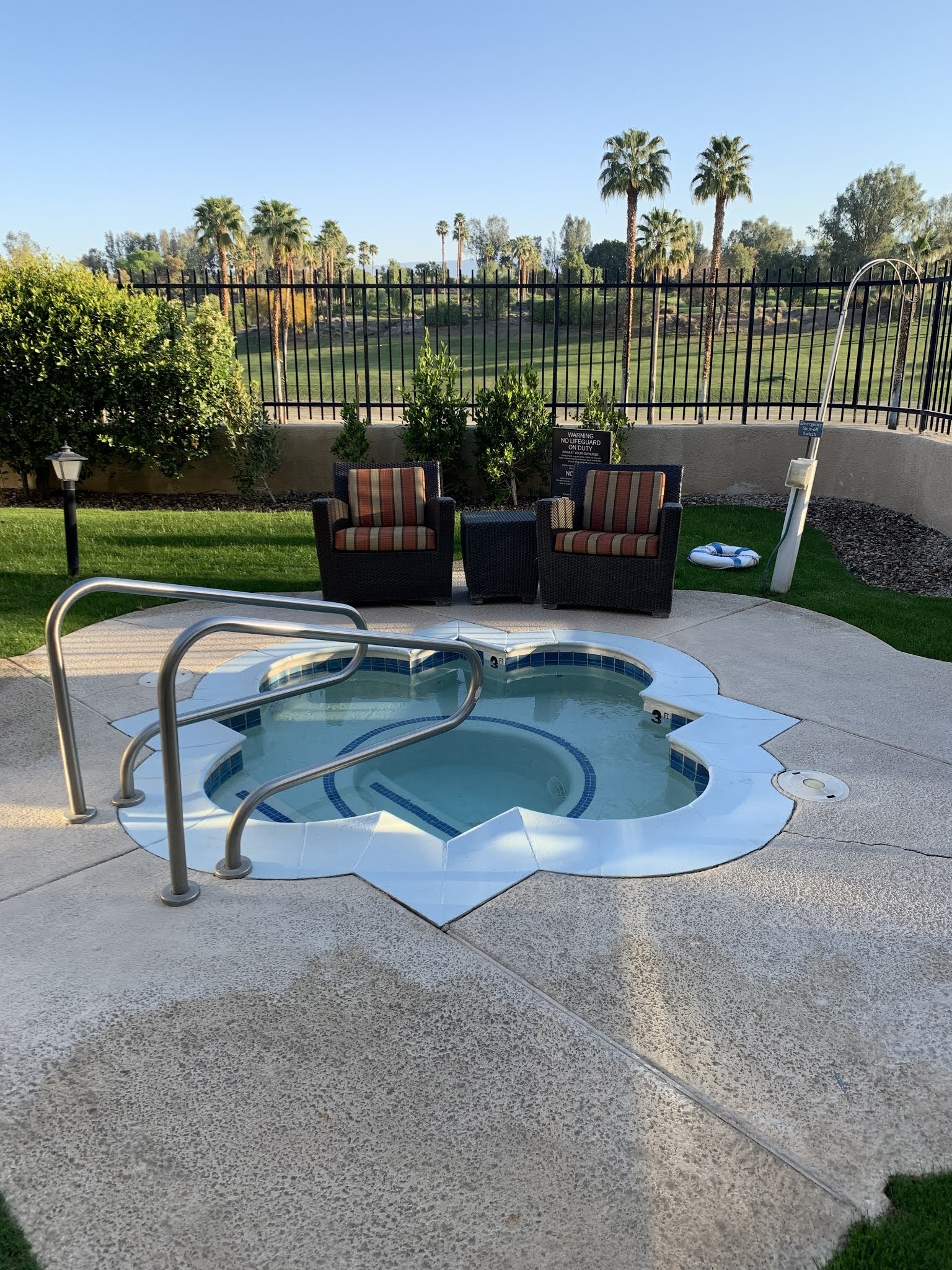 Another view of the hot tub and patio area: 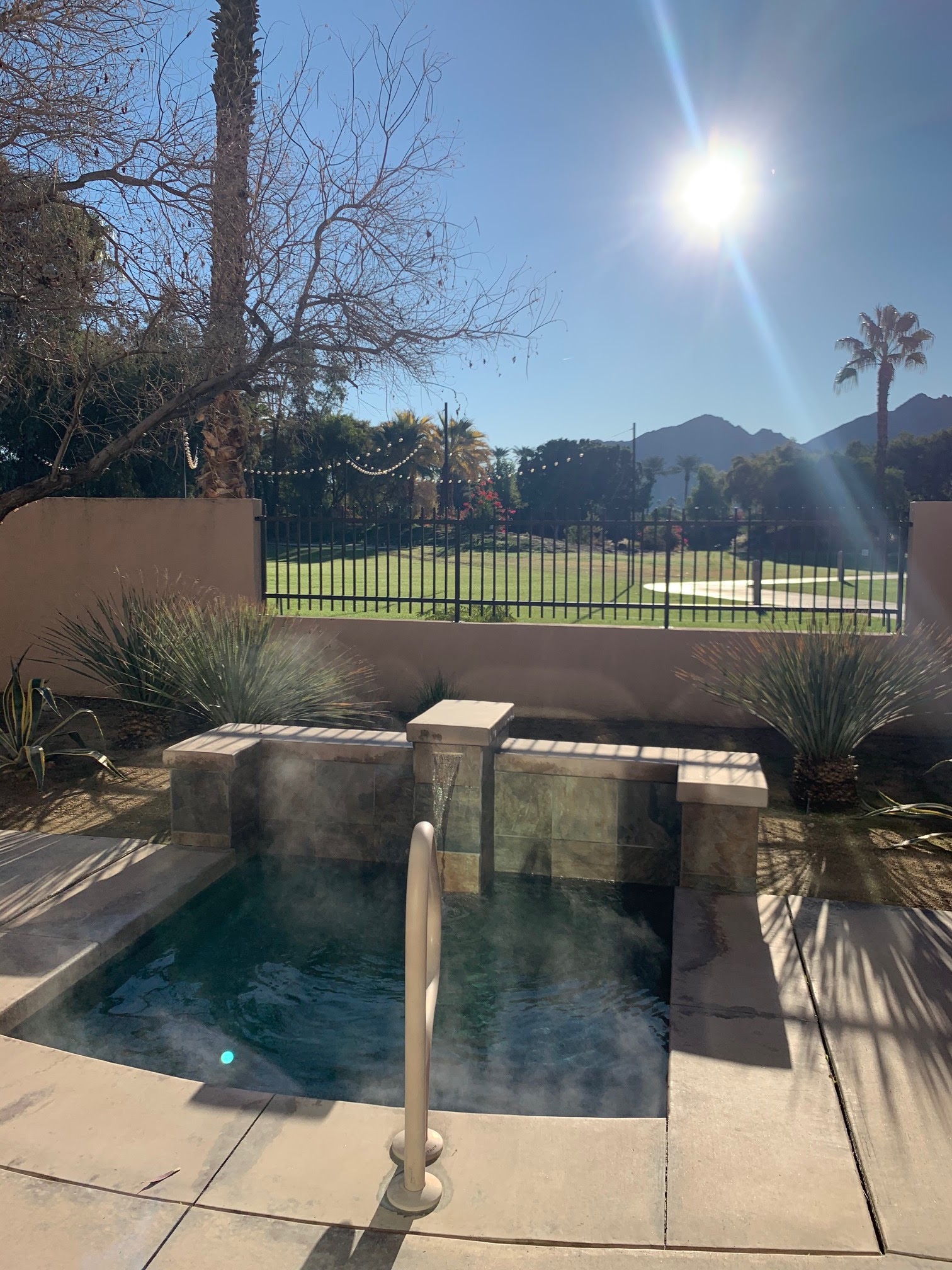 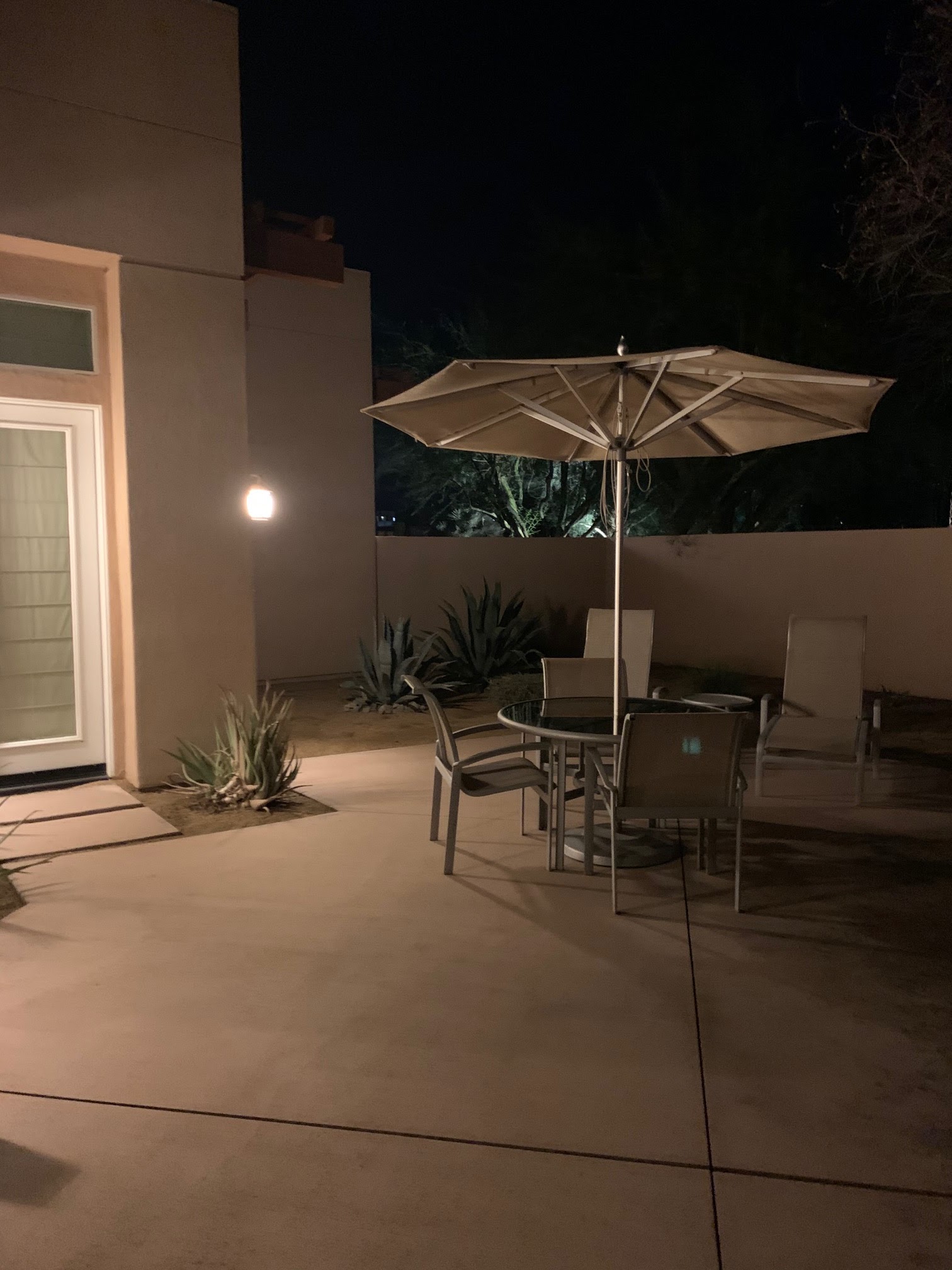 Service wise the resort the hotel does a pretty good job for the most part. As mentioned above all villas and bungalows come with a host (formerly known as a butler). We only utilized the service a couple of times to restock the fridge as the villas and bungalows come with unlimited free water bottles, juice, pop and sparkling water. One of the hosts was a gentleman who retired to the Palm Springs area from Vancouver but needed to get out of the house so he took the host job! These hosts do a great job (at least for the small things we asked for) but I’m sure they step up to the plate for those who like to make the most of all the things afforded to them for a stay in the villas.

We visited the main restaurant Lantana several times and really enjoy the food there. The Short Rib was pretty amazing! We did order room service twice and that’s were the service seemed to fail a bit as it always took much longer than they promised. The one I recall was a 30-35 minute delivery time, at 60 minutes I called and was told it would be another 5 minutes but it ended up being 15 more minutes.

Surprisingly this trip we didn’t make use of the pool area as on this trip as we spent more time exploring the area and using our villa’s hot tub and yard! The resort does have several great pools and was actually just in the midst of building their new water park that will include a lazy river and new waterslides. From my last review they stated it was set to open in late 2020 so lets hope that’s still the case.

Overall we really enjoyed staying at the Hyatt Regency Indian Wells for a second time within a year and are pretty sure it may become our usual base for the Palm Desert area. Don’t get me wrong, we do love other hotels here and always talk about staying at some new ones but the villas are such a good option for our family, the resort itself is great (and will be even more fun with the new waterpark), it has self-parking (if you know me from other reviews we have a tough time with valet only hotels) and being in Indian Wells it is central to being able to explore the are both east and west with decent drive times. 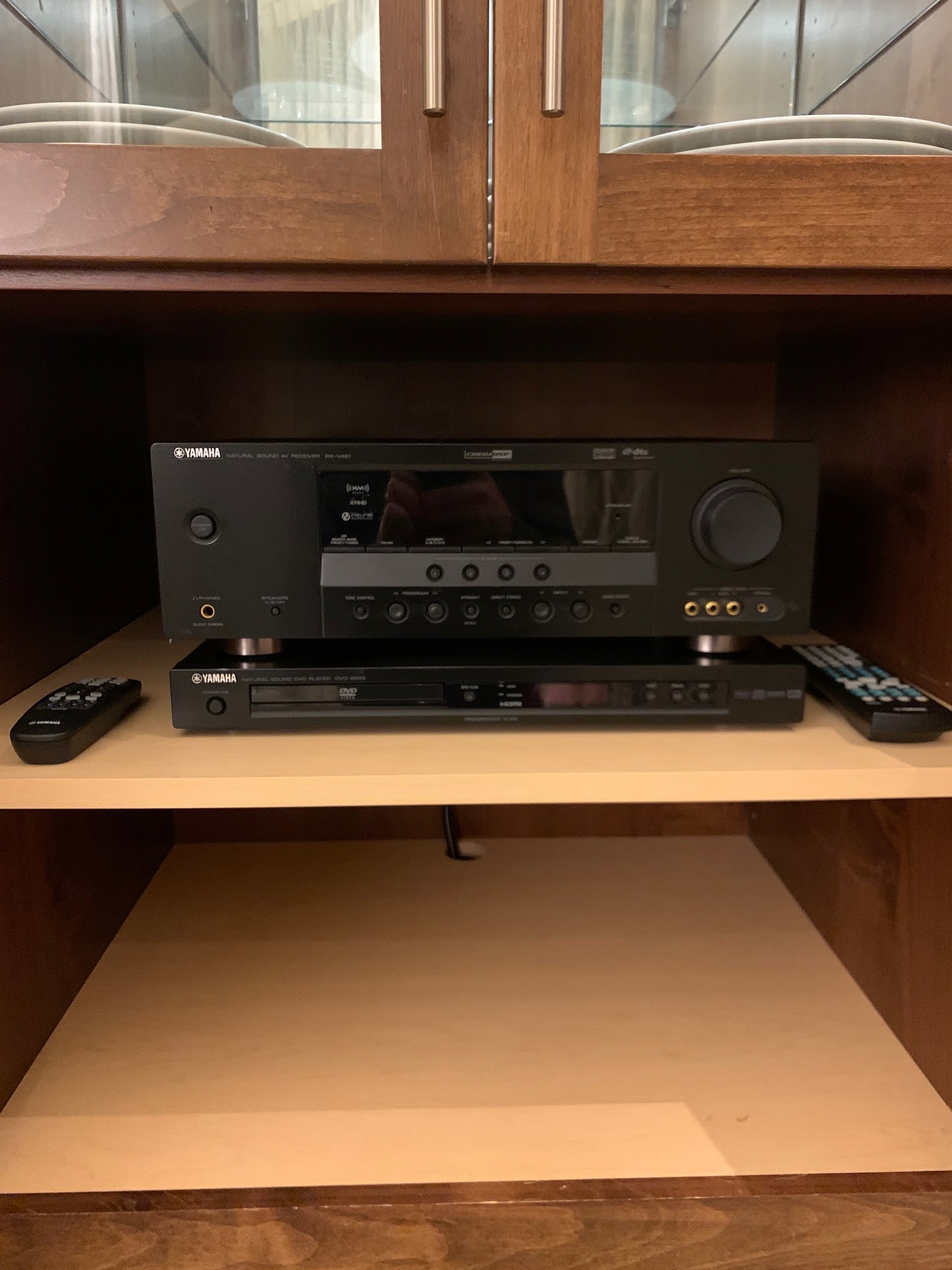 Points required for a free night:

Talk to us! Have you stayed at the Hyatt Regency Indian Wells Resort & Spa? What are your thoughts of the hotel? Or are you
planning to and looking forward to it? Let us know below!

All images courtesy of the author