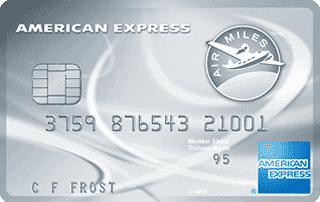 American Express revealed fresh new enhancements to the American Express AIR MILES Platinum Card today that will see the card earn more AIR MILES than before and offer a generous annual redemption benefit! These enhancements will kick in on November 4, 2019 for both existing and new cardholders. Here are the changes that we see happening to the card:

These changes now make this card the number one credit card in Canada for earning AIR MILES Reward Miles. Before these changes the card earned 1 Rewards Miles for every $10 spent at AIR MILES Partners and at other eligible grocery stores, gas stations, and drugstores in Canada and then 1 mile for every $15 everywhere else. As you can see you’ll be earning double the miles on a lot of those purchases now with the 1 Mile for every $5 on food and drinks, gas and transit (same categories as the American Express Cobalt Card so you can utilize our Confirmed Cobalt Multipliers page to see where you’ll earn the 1 Mile for every $5 on food, drinks, transit and gas) and then all other purchases will earn 1 Mile for every $10 – not just purchases from AIR MILES partners, grocery stores etc. The 1 Mile for every $5 is capped for $30,000 in spending annually just as we see on the American Express Cobalt Card. This means you can earn 6,000 AIR MILES each year for that $30,000 in spending. Overall these are very welcome enhancements to this card and make it very attractive – even if you are someone who doesn’t use AIR MILES or have it as a secondary or tertiary program as that earn rate is pretty significant. We value AIR MILES Reward Miles between 11 and 15 cents each when you redeem for travel although you can get even more than that out of each Reward Mile. This means the 1 Mile for $5 sees you getting a return of 2.2% to 3% for travel or if you look at Cash Rewards where you redeem 95 miles for $10 your return would have an effective return of 2.1% – that’s higher than a lot of the cash back cards in the market.

The other enhancement to the card comes on the redemption side. When you book a flight or vacation package with AIR MILES you will receive 25% of the miles redeemed back to you as a bonus (up to 750 miles). This means when you will get some miles back to your account when you redeem up to 3,000 miles. Ideally this is what you would want to do and push your first redemption of each year as close to that 3,000 miles mark if at all possible to maximize your return. Still, 25% back on redemptions below that amount is a great feature as you may be someone who never gets to the 3,000 mile level but can easily get to 1,200 or 1,500 miles and redeem for a short haul flight and save 25% on it. I’m happy to see American Express add this feature as it is something we don’t see very often, the BMO AIR MILES World Elite Card does have it’s 15% off on redemptions in North America with no cap but other than that there aren’t many cards offering a miles or points discount when redeeming for flights.

As is usually the case with enhancements to cards, all the positive changes tend to be offset by some negative changes and the card has only one, the annual fee is being increased to $120 from the previous $65. I feel this may be a touch on the high side since the card doesn’t have a large benefits and insurance package. Personally I would have probably have priced it at $89 or $99 as that would be a bit more attractive to the market (and current cardmembers) and basing it on what other $120 a year cards from competing issuers and programs offer such as lounge access, higher accelerated earn categories and better insurance options.

Update for the annual fee! I asked about the fee for existing or new cardholders who get the card prior to November 4th and whether they would need to pay the difference/pro-rate their annual fee from $65 to $120. Well the good news is that if you have the card or get it before November 4th you won’t pay the $120 until your next card anniversary! So this means if you don’t have the card and want to get it for the changes you should do so now so that you only pay $65 in the first year instead of $120!

Overall though I would say these are very welcome changes to a card that hasn’t seen an update in several years and it is a step in the right direction to make it more relevant to today’s market. By that I mean, AIR MILES hasn’t been adding a slew of new partners so by changing the best earn rates to not having the AIR MILES partner stipulation it does make the card much better than it was.

You can learn more about the upcoming changes here.

What do you think of the upcoming changes to American Express AIR MILES Platinum Card?  Let us know in the comments below!

The card details listed below is the current card offering and there is no harm in getting it now as these new changes will take place on November 4th, 2019 for both new and existing cardmembers.