Playing catch up on this news! Some time ago Cineplex announced changes coming to their very popular SCENE program. These changes will take place on April 17, the day after Starbucks’ changes, so that will be the week of change!

The forthcoming changes to the SCENE program will be seen on both points earning and points redeeming sides. I think for most people who don’t hold a SCENE Visa Card or have a big points balance, the changes aren’t that significant moving forward as the majority of members do earn and redeem for movies. Ultimately when you look at the revised earn and burn schedule for movies you are still getting 1 free movie for  every 10 movies you purchase (of the same type that is, ie Standard or 3D or Enhanced or VIP)

But in reality what this does mean, is all your current balances, if not used prior to April 17 are being devalued. Your 1,000 points that you thought would get you a movie will not after that date. You’ll have to spend at 250 more points or more if you are going for the fancier movie settings. 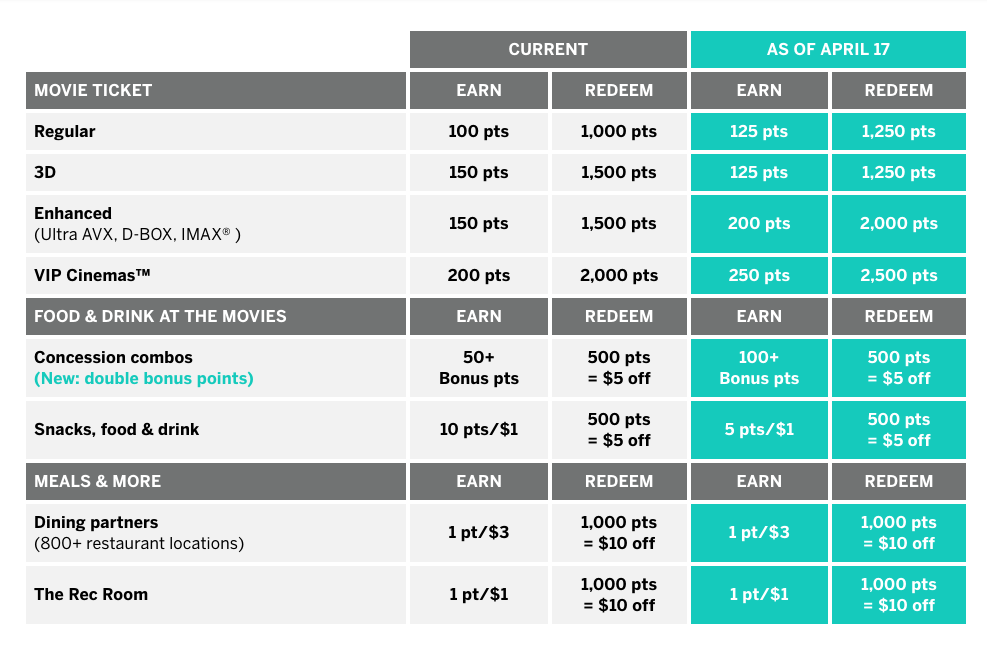 Other devaluation comes in the food and drinks at the movies and to the credit card. Concession Combos will now earn more points and remain the same on the redeeming side but it is when you buy non-combos where you will take the hit. The earn rate is being cut in half from 10 points per $1 to 5 points per $1 however it will still take 500 points to get $5 off those items. Outside of Cineplex movie and food options the earn and redemption rates at their dining partners (Cara group of restaurants and The Rec Room) will remain the same.

The other major hit that I see here isn’t mentioned on the SCENE website and that is with these new redemption rates for movie tickets the points earned from the Cineplex SCENE Visa are being devauled. You see, the card, as pointed out by one of our readers when we mentioned the new welcome bonus on it, has been increased to 2,500 points which still equates to 2 free movies, so this is the same as the old welcome bonus of 2,000 points. Glad they kept that the same. What they don’t mention is that your everyday earn rate on the card has not changed. You still earn 1 point per $1 spend on the card outside of Cineplex purchases which earn 5 points per $1. This means where you could spend $1,000 on the card before and get a free standard movie ticket you now have to spend $1,250 to get that same ticket!  I would wager a guess that is this a major reasoning behind the change in the program not what is stated on the website – that’s just marketing speak:

As is seen with most loyalty programs, most points that are issued are from co-branded credit cards and I believe this to be the same for the SCENE program. People spend lots on their cards and hold onto big balances of points. So how do you get rid of all those points that have been accumulated and hoarded? Make it cost more points to redeem for items. This to me stands out to be the main reason for the upcoming changes. I could be wrong, I hope I am but time after time this tends to be the case. Hey though,  it’s not all bad news, 3D movies have gotten cheaper now but really how many 3D movies are out there these days?

What are all your thoughts on the changes? Did we miss anything? Will you be keeping the SCENE Visa Card? Let us know in the comments section below!