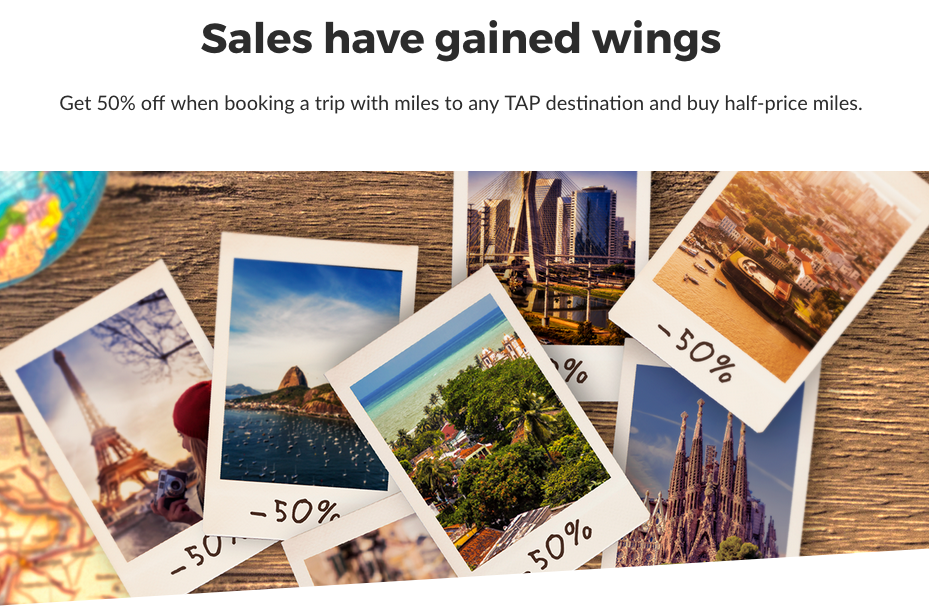 A big thank you to a long time loyal reader of our global site FrequentFlyerBonuses.com, Pedro C from Portugal who
knows the TAP Portugal Miles&Go program inside and out! According to
him when TAP Portugal changed the name of the program from Victoria to
Miles&Go in late 2018 they also massively devalued the program
without notice. Of course this ties in with our post last week when we
broke the news on this deal:


Great Deal! 50% off all TAP Air Portugal Miles&Go Award Tickets Worldwide – Fly Toronto to Portugal for as little as 26,000 miles

and his email to us reveals that this isn’t such a good offer as we
originally thought. There are two reasons why it isn’t as good of deal.
Firstly, the 50% discount is off of their high season value rates and
most of the window of this promotion is during the saver season which
means without the sale you would get up to 30% off anyways.

As Pedro told us:

1) The promotion period included in that promotion belongs to the so
called “saving season”. Such periods are pre-defined and during those
periods the “high season” table NEVER applies:
https://www.flytap.com/en-pt/miles-and-go/spend-miles/saving-season
So you see already the 1st problem:
–
they are evoking a discount of 50% on a mileage table (high season)
that, anyway, would have never applied to this period. So it is
actually, a much lower saving what is being suggested and proposed than
the 50% mentioned.

2) Technically there could be one small window
within this promotion period in which, technically speaking, the high
season table would apply (basically around Carnival time – where the
High Season table would be valid for the specific period)…but guess
what? Exactly that period is excluded from this 50% off
promotion…incredible how they twisted this, right?

The second reason behind this not being such a good deal could be seen
as some slight of hand marketing from TAP. On the original promotion
page they linked to a PDF of redemption rates and that PDF did not state
anywhere that they were the discounted rates  – in fact at the time we
published our post last week it is quite the opposite and it made it
seem like the rates were the full amount and those would be discounted
by 50%. Now however when you go to the TAP website they have updated the
promotion landing page to state it lists the promotional rates (and
there is no longer a link to the PDF). And Pedro explains:

On a very sad note, the mileage value 50’000 miles for return trip
mentioned in your article and used as base for your calculations is not
correct. All the values are one-way (with the promotion 50% ALREADY
APPLIED). Without the promotion, TAP requires 200’000 miles on high
season for a return Business Class ticket to North America.
This was
part of a very recent change that has caught everyone unnoticed and was
under-advertised completely and masked away by a program name change
from TAP Victoria to TAP Miles & Go.

Unfortunately, FFP
members community in Portugal is weak, unorganized and has no voice in
the matter. FFP is also not a mass-consumption item in this market and
so TAP gets by easily with such actions. So, this “promotion” comes just
after the “standard values” were increased by over 100% – easy to come
back now and say: I now have a 50% off promotion…right?

And confirming what Pedro told us, here are the regular redemption rates for the new Miles&Go Program:

So while last week it seemed like you could fly between Toronto
and Portugal in economy class round trip for 26,000 miles and 50,000 miles
for business class, it’s actually double that. The discounted round
trip rates are 52,000 miles for economy and 100,000 for business! Not so
good of deal now!

Thanks again to Pedro for bringing this to our attention.