It has been a few months since we have predominantly featured the Air France KLM Flying Blue Promo Rewards here on Rewards Canada. This has been due to a couple of reasons – two months ago it was because there were no Canadian cities included and for July… well, I kind of forgot about it!

Since the last time we covered this promotion, Flying Blue introduced their new award pricing that has done away with the traditional award chart and moved to dynamic pricing. There are both pros and cons to this when it comes to Flying Blue’s Promo Rewards. The pro is that there are routes/times the miles required will actually be less than they used to be with the old Promo Awards – yes the used to be Promo Awards and are now called Promo Rewards 🤷.  While the con is that there are routes/times that may be higher than they used to price at. Also the dynamic or variable pricing doesn’t always make sense on as you’ll find out below.

Now onto the actual newest set of Air France KLM’s Promo Rewards!  This time we only see three Canadian cities included. With promo
awards the
discount
ranges from 25 to 50%
off the regular amount of miles required to redeem for these flights. As
you can see just by the
discount this can be a very good offer if you get 50% off for Business
Class! This set does see one half off business class offer from Edmonton to Europe,  25% off business class out of Calgary and 25% off both business or economy class out of Vancouver. While 25%
isn’t as good as 50% of course, it still is
something to look at if you were planning travel to Europe in the fall.

August Promo Rewards – Save 20% to 50% on the Award Miles usually
required for an award ticket. Destinations vary by each promotional
period. Full Details Book by Aug 30 for travel Sep 30 – Nov 29, 18

Calgary to Europe: 25% off Business Class on KLM

Edmonton to Europe: 50% off Business Class on KLM

Vancouver to Europe: 25% off Economy or Business Class on Air France or KLM

And an example of some of the availability from Edmonton to Amsterdam: 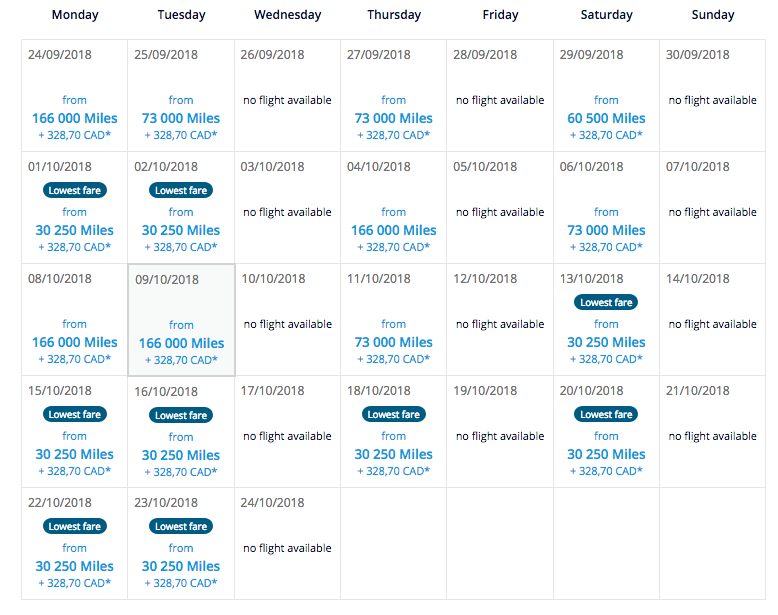 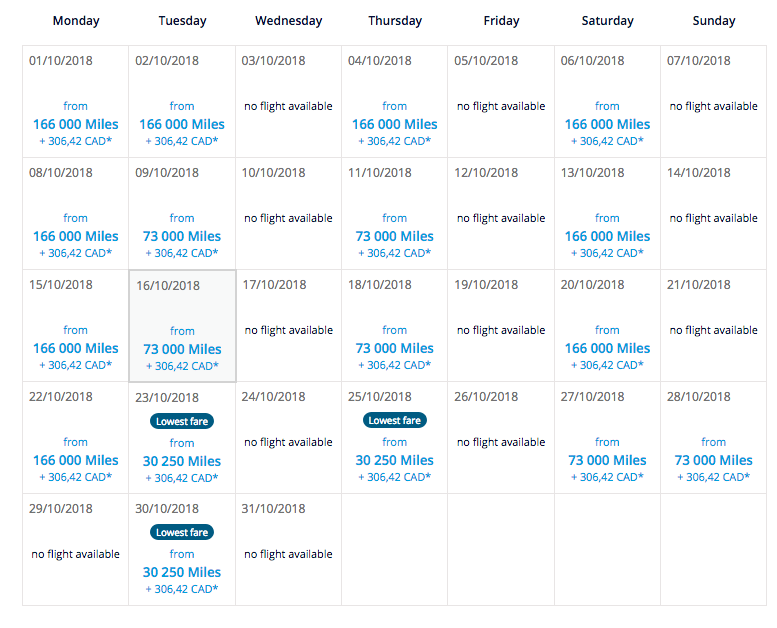 Definitely a lot more availability going out than coming back but again this is only a one month spotlight of the two month travel window. You could easily go for a week late in October:

Not bad at all – 60,500 miles and $635.12 in fees and taxes for business class. Under the old promo awards this flight would have been 62,500 miles plus the same fees. Yes the fees are on the high side but most other programs who may have lower fees would be costing you at least 50% more miles.

Next I was going to give an example of how routes are variable and where you would have to connect via Amsterdam or Paris would become more expensive then the direct flight. However in my search I randomly selected Milan Italy and it screwed everything up. Have a look:

Only 58,000 miles and close to the same amount of taxes. People have said that the new Air France KLM award rates make no sense and here is an example of that!

And an even cheaper route (can you tell I had fun last night searching for the cheapest biz class offers from YEG to Europe?)

Don’t have enough miles to redeem? You could look to pad your Flying Blue account to get these award
flights by taking advantage of Marriott’s Travel Packages where
you can get 7 nights and miles as follows (although these packages are
less valuable than Package #1 options): 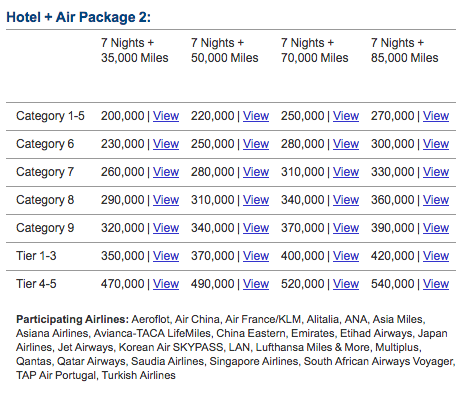 However you would need to redeem by August 17th because as of August 18 they are being massively devalued. Of course you have to have enough Starpoints/Marriott Rewards Points to do this in the first place. Your other option is to also do a straight conversion from SPG to Air France KLM where you can get 25,000 Flying Blue Miles for every 20,000 Starpoints so that Edmonton-Brussels flight could be had for 43,000 Starpoints! As of August 18th, you will be able to convert from Marriott to Flying Blue at this same ratio, albeit 60,000 Marriott Rewards points will net you 25,000 miles.

All in all there are quite a few good deals to be had with this latest Promo Rewards from Air France KLM’s Flying Blue program, especially so if you can take advantage of the 50% off business class flights from Edmonton!