Back on June 28 Marriott revealed where all their 6,500 hotels will fall into in their new free night award charts. On that day they also revealed the details of what is happening to the very valuable Travel Packages redemption option. Marriott travel packages provided some huge value if you were able to earn enough Marriott Rewards points to redeem for them. Earlier in the year when we learned about all three reward programs coming together it was announced the packages would be retained but we did not know what would happen in terms of redemption rates.

Well that was also revealed on June 28 and the news isn’t so good. Previously there were multiple charts for the various airline partners and now there is one for all of them. 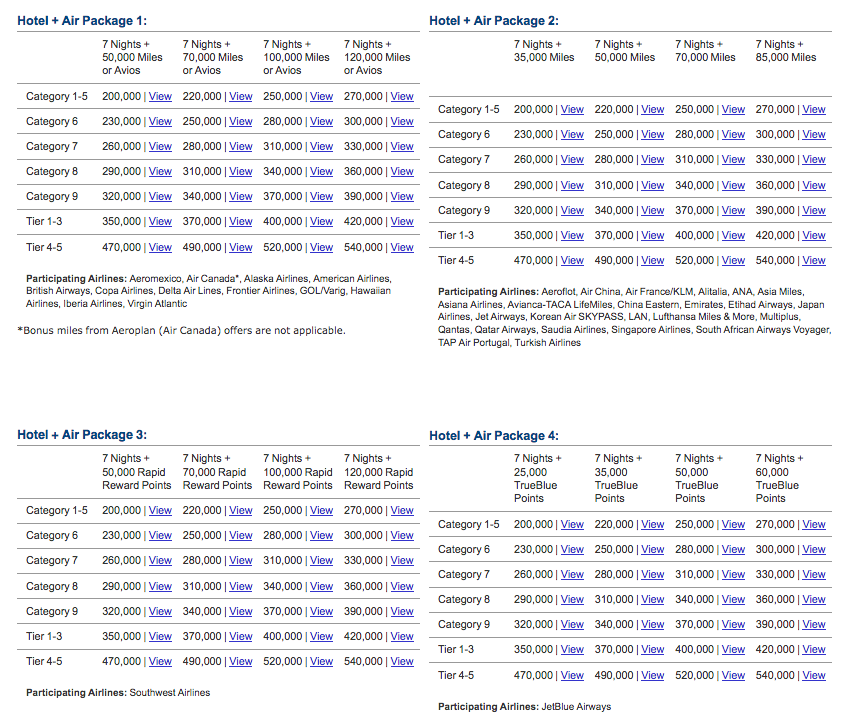 For most of us Canadians we used Hotel + Air Package 1 as that has Aeroplan, Alaska Airlines, and British Airways and for some it was the Rewards Plus chart for United.

Here is the new chart:

You’ll see that for all categories and airlines the number of points required has jumped significantly. For example right now you can redeem 270,000 rewards points for 7 nights at category 1-5 hotel and 120,000 Mile into the most popular programs like Aeroplan, Alaska and British Airways. Come August you’ll need 330,000 points for 7 nights at Category 1-4 hotels and 100,000 miles. That’s 60,000 more points for roughly the same hotel options but with 20,000 less miles.

The packages may still provide some value if you have long stays planned, what I mean by this is if you are planning a 7 night stay somewhere it will cost you less points then redeeming for just a hotel on its own by getting a travel package as you’ll get the miles on top of it but you really have to run the numbers to make sure this is the case for you. You also get many more higher end hotels to choose from now that Starwood hotels are in the mix.

Ultimately though the Marriott Travel Package as we know it will lose a lot of its luster come August. Which means if you have enough points right now and know that you
can make use of the certificates for the 7 nights and won’t let the
airline miles go to waste – you’ll want to redeem for a package(s) as
soon as you can this month and book your hotel to get the best value out of them.