The acquisition of Starwood Hotels by Marriott has now closed. The company will still be called Marriott International Inc. and it brings together 30 hotel chains with over 5,700 hotels making it the largest hotel company in the world.

The news has been much anticipated and many were wondering how the two loyalty programs, Marriott Rewards and Starwood Preferred Guest would work in the acquisition. The news that came today about the loyalty programs is quite exciting in fact. The two programs will continue to run separately as we already knew until sometime in 2018. Then late yesterday some news leaked about the transfer rate of transferring Starpoints to Marriott would be 1:3. And that has been confirmed now and it is a decent rate. We give Marriott Rewards points a value around 0.8 cents which means Starpoints transferred over would have a value of 2.4 cents. Now you can pull greater value than that out of Starpoints but you can also pull greater value than 0.8 cents out of Marriott Rewards points.

Today with the acquisition that transfer rate has been confirmed but what is even more exciting is that you can immediately transfer points between Marriott Rewards and Starwood Preferred Guest accounts (in either direction) and you can status match immediately between the programs.

We want you to take advantage of the best of both programs. That means a few things:

• You can now link your Rewards and SPG accounts.

• Your highest status level* will now be matched across all of your accounts.

• You can transfer points between your accounts.

This is huge, I spoke Marriott Rewards and SPG Executives Thom Kozik and David Flueck this morning and they were excited that never in history have two programs of this size come together to be able to offer and unlock benefits as what they’re offering on day one.You could hear the excitement in both their voices even though they know they have lots of work ahead of them on how to bring the best of both programs together. Their next step is to work on harmonization of the programs on the back end and to start looking at the data and behaviour of the 85 million members they have worldwide. The good news for them is that can now see how each others program works to solve challenges, appease their customers and more. It really is about bringing the best of both worlds into one huge rewards program. Finally they also mentioned that you should see even more benefits out the rewards program in the future since the scale of the programs now makes them the most desirable partner in the industry which should allow them to do bigger and better things.

Do your account linking now! Don’t wait as you’ll want to enjoy benefits of both programs!

Essentially you can now ‘choose’ to earn Starpoints or Marriott Rewards points for your stays at anyone of the 5,700+ hotels since you can transfer back and forth between the programs. This is awesome as there are places where Starwood does not have hotels so you can stay at a Marriott hotel to earn Marriott Rewards points and then transfer them to your SPG account or vice versa! 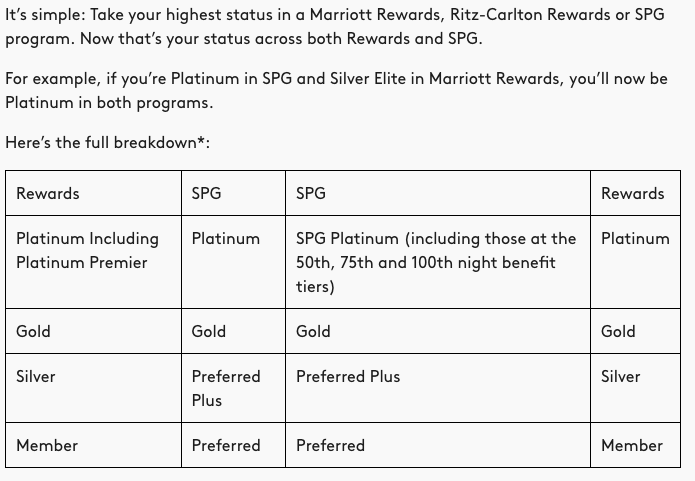 This is a boost for Marriott Platinum members since SPG Platinum is such a strong elite level and its a boost for SPG Gold as they now get  Marriott Gold which provides Club Lounge access for stays at Marriott locations!

The other benefits afforded by the elite status match are as follows:

Then we can go on to the airline mileage conversion, SPG has tons of airline partners so you now can convert your Marriott Rewards points to SPG to convert to one of more then 30 airline partners (with the 5,000 bonus miles if you convert 20,000 Starpoints at once), SPG now has access to Marriott’s amazing travel packages for award nights+airline miles. The possibilities go on and on with this unexpected combination of programs today!!

On the Credit Card front both Amex and  Chase will run simultaneously for the time being and there is no word on which card partner will be chosen when the programs combine in 2018. So our word of advice is to get both cards here in Canada to maximize your value across both programs! The Starwood Preferred Guest Credit Card from American Express and the Chase Marriott Rewards Premier Visa card are both very strong cards with the latter giving you Silver Elite status immediately while the SPG card will give you Gold status if you spend $30,000 or more on the card in a year.

You could also jump on The Platinum Card from American Express as it gives you automatic SPG  Gold status which means you’ll automatically get Marriott Rewards Gold status! It also means you can now convert Membership Rewards points to Marriott via the SPG program. So the American Express Gold Rewards card will get you 3 Marriott Rewards points per dollar on purchases at Gas, Grocery, Drug Store and Travel purchases.

There is so much happening with the news today that I’m sure we may have missed something in the excitement so be on the lookout for more posts potentially on this topic!

Finally our congrats to Starwood and Marriott! Rewards Canada has been partnered in various ways with both companies for well over 10 years and we look forward to working with them for many more years!

What are your thoughts on today’s announcement? Are you excited? What are you most looking forward to with the linking of the programs? Let us know in the comments below!