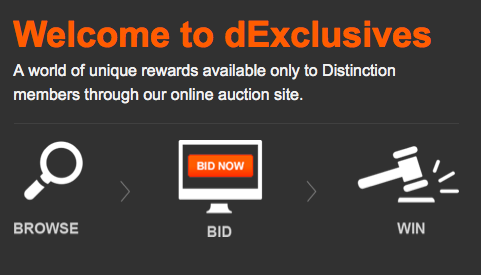 Yesterday Aeroplan announced and launched the latest benefit for its Distinction members, dExclusives. What is dExclusives? It is an new reward option that will allow Distinction members to bid on or redeem Aeroplan miles on a wide variety of one-of-a-kind rewards.  This new reward option reminds us of SPG’s Moments where you bid Starpoints on similar money can’t buy experiences and is the first to be offered by a Canadian based loyalty program. This definitely can be a good reward option for those members who have more miles than they know what to do with, especially on the high end items like the FIFA World Cup or Grand Slam Tennis final offers!

dExclusives will offer everything from access to professional sporting events, tickets to sold out concerts and once–in-a-lifetime trips that are curated to offer some of the highest quality products and  some of the most in demand experiences from around the world.  dExclusives rewards include:

In the City – Amazing tickets to some of the best events in town such as: Sold-out concerts or exclusive access to sporting events.

Here is how it works:

Browse – Distinction members can check out all the rewards currently available for auction at the dExclusives auction site: www.aeroplan.com/dExclusives.

Bid – Place an entry or maximum bid on the site.

Win – If you’re the highest bidder when the auction closes, you win.  Miles will be automatically debited from your account and you will be contacted by an Aeroplan dExclusives representative about the next steps.

In addition, Distinction members will also have a chance to bid on ‘Redeem Now’ opportunities whereby special rewards will be offered in limited quantities and at a fixed amount of miles, giving members the thrill of accessing their dExclusives reward instantly.

For more information, or to place a bid, please visit www.aeroplan.com/dExclusives

Now we want to know what auction you would bid on from the current list and/or would items you would like to see in the future! Aeroplan and Rewards Canada have
teamed up to see what Rewards Canada readers and subscribers would bid their miles on by having you comment here on the blog. What do
you stand to win? One lucky entrant from all the entries on the Rewards
Canada blog will be picked at random and awarded 5,000 Aeroplan Miles

Here is how you can enter the contest:

Leave a comment below on what auction you would bid on (you don’t actually have to bid, just tell us about the one that interests you the most) and/or tell us what type of items you would like to see in future dExclusives auctions!

The contest closes on Tuesday June 3rd, 2014 at 12:00om NOON MST!  Winner will be
determined by random draw from all eligible entries received. Open to
Canadian residents over the age of majority. Void where prohibited.  No purchase necessary.  Winner will be required to answer a skill testing question.