For the fourth time in a little over four years my family and I opted for a winter vacation in Maui. Every time we have gone, including this time, we have stayed at the Westin Ka’anapali Ocean Resort Villas. When we first visited Maui in October of 2009, we really wanted to stay in the  Ka’anapali/Lahaina area and we liked what we saw and read about the Ocean Resort Villas. What more could you ask for as you get the best of both worlds in the fact the place is like any other hotel resort on the island with multiple pools, restaurants and amenities yet the rooms are condo style with kitchens/kitchenettes and each one has their own washer and dryer (makes it easier to pack light!).

The only issue we saw the first year was price since I didn’t have enough Starpoints for a full redemption or Cash+Points redemption. That is when I found Maui Hawaii Vacations, a third party agent for the Ocean Resort Villas, which we used for the first booking and all the others since then. Not only do they have rates up to 50% off what Westin/Starwood charge including SPG35, Better Tomorrows and other promo rates offered by Starwood/SPG. Above that, they also offer amazing service. Naomi, who takes care of all the Westin Ka’anapali Ocean Resort Villa bookings, has always been extremely helpful and has gone out of her way to meet our requests and address any and all concerns we ever had. For this latest stay I originally booked us a Studio for $220/night (we had been in a Studio the 3 trips prior) but when we got there we weren’t happy with the location of the room we were assigned so we asked what other rooms were available in Building 5 which is our favourite building in the complex. We were told that there was only a 1 bedroom villa available which Westin initially wanted an extra $150 per night but they said they would do it for $100 per night. I accepted it to not lose the room but knew that a phone call to Naomi should get us the room for their nightly rate. A quick call to her with a quick explanation of the situation got the ball rolling. Around 10 minutes later she called me back saying all was taken care of and we had the room at Maui Hawaii vacations rate of $265 or an extra $45 per night over our original Studio rate. One caveat about booking through Maui Hawaii vacations is that you will not earn Starpoints on the room rate, which for me is not a big deal as the cost savings are worth more than the points but you do earn Starpoints on incidentals charged to the room. Some other highlights of booking through MHV is that the rates include daily housekeeping and parking. Owners or people who book stays via VRBO are unlikely to get daily housekeeping unless they pay for it and I believe that if you book via Starwood/SPG you have to pay the daily parking fee. I can’t say enough about Maui Hawaii Vacations and no I did not receive any compensation from them for this post, just great service!

Now on to the actual stay!Once again my family flew on Air Canada’s direct flight between YYC and OGG, only difference this year was the flight timing. The flight now leaves Calgary just after 8am versus the early afternoon departure last year. The new departure time allows for arrival into Maui just after noon. By the time we deplaned, got our luggage and rental car, at lunch and made the drive to Ka’anapali it was 3pm. The Resort Villas check in is at 4pm and our room was not ready (after the upgrade process noted above) so we made our way to Whalers Villages for some Yogurtland (seriously, someone needs to open one of these up in Calgary and even more so an Ono Gelato) At about 4pm we got a call from the resort letting us know that our room was ready so back to the resort we went.

After getting our room keys we made our way to the 1 bedroom villa in Building 5. This is the first time in our four stays where we did not have an ocean front or ocean view as this one bedroom looked onto the main pool. Apparently the resort was near capacity and no ocean fronts/ocean views were available for our full length of stay. We could have tried to switch a few days later but once your settled in it is a pain in the butt to move rooms. Honestly, we spend very little time in the room anyways so the view is not that critical. I must say however that we will never go back to the studio villa as the one bedroom provides way more room especially with my girls growing up, we needed the extra space! Over the past 4 years the decor has not changed with a King Size Westin Heavenly bed and a pullout sofa but the one bedroom gave us a much larger lanai with 4 chairs and a table (vs 2 chairs and a side table for the studio), a larger dining table and a full size kitchen. The bathroom has a separate shower and jetted tub and other than being bigger than a Studio bathroom with the same amenities, the one bedroom has dual sinks instead of a single sink. 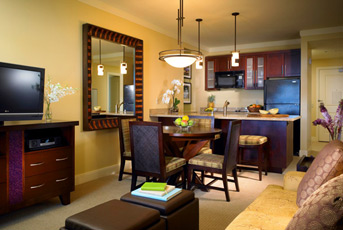 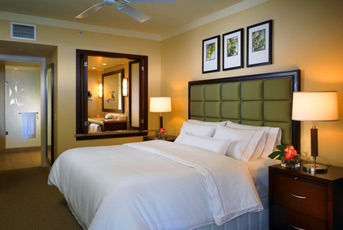 Compared to our first stay in 2009, some of the room amenities are starting to show their age like the carpet plus our sofa had a bunch of orange stains on it as if a child had coloured beyond the pages of their colouring book. However when I look at the room and resort overall I would have to say the hotel management has done a very good job of keeping the place up. During our stay we only encountered one annoying issue and that was due to the fact that our room had the electrical panel not only for our room but the studio next to us. For some reason a breaker for the room next to us kept tripping so maintenance would have to come to our room to reset the breaker. Not a huge deal except for the second time it happened around 10pm one evening and the knock on the door from maintenance woke up one of my kids.

The beauty of having a condo is two-fold, food and laundry! We hit Safeway on our first full day and filled the fridge primarily with items for breakfast and lunch including some items to BBQ. Speaking of BBQing, the Westin provides seem great BBQ areas to enjoy fresh food off the grill with family and friends:

The resort also features 3 restaurants, 2 of which we ate at during this trip (most meals if not BBQed were enjoyed in Lahaina or Whalers Village). The third restaurant we only used to order drinks from during our days at the beach or beside the pool.

Pailolo: This is the restaurant we only ordered drinks from. According to my kids they make killer smoothies and virgin lava flows. In the past we have eaten here but the food was mediocre at best.

Pulehu: This would be considered the fancy restaurant of the hotel which offers an Italian menu. I would recommend the Tomato Bisque!

Ocean Bar & Grill: We ate here on the first night we arrived and my Satay Beef was delicious. On past trips we ate breakfast here enjoying their breakfast buffet, which is quite good, especially if you don’t want to leave the resort in the morning.

As you would expect with a resort of this caliber there are multiple pools including kids pools (one with a cool pirate ship that has slides and water spray jets, an adult pool and others in-between) The pool at the South Towers also has a waterside. The pools are perfectly suitable for families as most them are only 3 to 4′ deep, which meant my kids could touch the bottom and enjoy themselves without me hanging on to them when they chose not to swim. 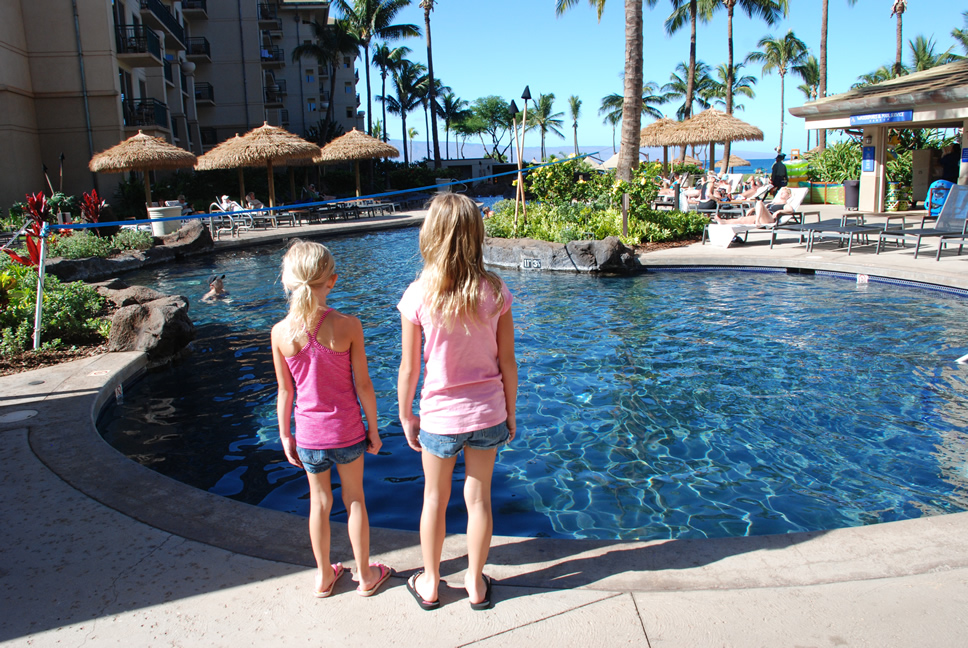 The Westin Ka’anapali Ocean Resort is situated on the North portion of Ka’anapali beach which was rated as one of the best in the World by Conde Nast. This is beach is less protected than some of the South Maui beaches so the waves can get a bit rougher here. When my kids were small I had to hang on to them but those days were gone this trip as the girls could handle themselves. I did notice that the waves this trip were probably the calmest we had out of our 4 trips. Because of this we spent more time in the ocean then the pools. The beach is great for whale watching with humpbacks breaching, tail slapping, pec slapping and more on a daily basis. We were also witness to a female humpback and her newborn whom we assumed had just been given birth to as they were surrounded by ‘blood red’ water and the mother was still holding the newborn on her nose. Wildlife is not limited to whales,  in the evening the beach is littered with thousands of crabs just North of the resort plus you can see Sea Turtles poke their heads out of the water and if you are lucky enough you can even see Spinner dolphins like we did:

Our trip was also filled with lots of trips to Lahaina for lunches, dinners, shopping and treats like Gelato from Ono Gelato and Hawaiian Shave Ice from Ululani’s Hawaiian Shave Ice. We did our annual whale watch excursion with Pacific Whale Foundation, snorkeled at Baby Beach (great for the kids) and most of all lots of relaxing. Overall our fourth trip to Maui didn’t disappoint and I would definitely stay at the Westin Ka’anapali Ocean Resort Villas again in a heartbeat. Perhaps I should try somewhere else on the island but when you and your family like a place and are familiar with the surroundings, why change?