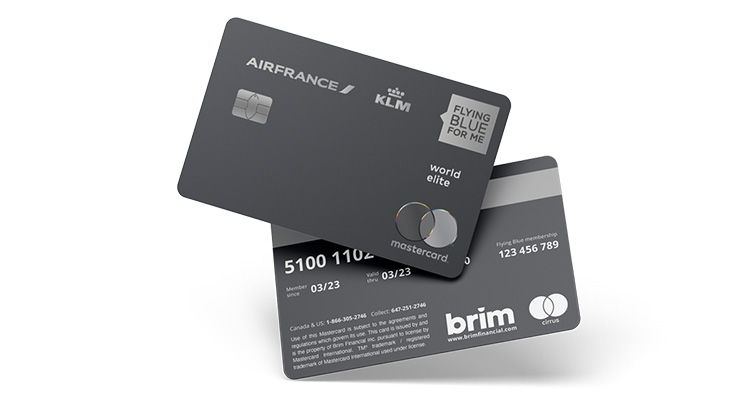 Soft launched a few weeks ago and covered on the Rewards Canada blog and podcast, the  Air France KLM World Elite MasterCard® powered by Brim Financial is officially here. A press release from Air France KLM Flying Blue marked the hard launch of the card today.

If you missed our blog post from a few weeks ago, here’s a refresher of what the card brings to the table:

The card features the following insurance:

Air France KLM Flying Blue uses a dynamic redemption model which means the amount of miles you redeem for flights will vary based on the cash price of tickets. They do however publish what the mileage starting points are and with the news that Rewards Canada broke in August that AF KLM dropped the economy class base level to only 15,000 miles one way (including your first checked bag!) from Canada to Europe, Turkey and North Africa, it makes the earning on this new card very compelling!

Remember you can also redeem Flying Blue miles on WestJet flights, and SkyTeam partners that fly to Canada such as Delta Airlines and Korean Air.

This is taken from the latest Rewards Podcast which you can listen to here or watch on Youtube:

Since the soft launch a few weeks ago the card has definitely been met with mixed to negative reviews across various forums and blogs. Overall I am in the middle to positive on this card – but that is looking at it in terms of where it fits in to our market and who the card is being targeted to. I think when you look at this card you have to look at who Air France KLM want to have this card and you also have to look at its specific competition which are other airline cards in Canada.

A lot of the comments and articles online are comparing this card to the American Express Cobalt® Card and most people (including Rewards Canada) are saying that the Cobalt card is a better option overall for earning Flying Blue Miles. And yes for the most part it is… but the same holds true for Aeroplan and British Airways. The Cobalt is better than the TD® Aeroplan® Visa Infinite* Card and RBC British Airways Visa Infinite Card card at earning Aeroplan points and Avios respectively but all of these co-brand cards have a specific place.

In some ways it is better than its direct competition

If we look at the new Flying Blue card and its earn to burn ratio, it is for the most part better than its direct competition in the airline space. It is better than the TD Aeroplan Visa Infinite Card, it is better than the WestJet RBC World Elite Mastercard, it is better than the Alaska Airlines World Elite Mastercard and so on. The reason why is AF KLM’s low economy class mileage requirement. We have provided lots of coverage about this on Rewards Canada but if you are unfamiliar with it, they have set their minimum redemption level for flights between Canada and Europe (as well as Turkey and North Africa) at 15,000 miles one way from Eastern Canada and 20,000 miles one way from Western Canada. That means you only need 30,000 to 40,000 Flying Blue miles for a round trip flight. The same thing on Aeroplan? You are looking at 60,000 to 70,000 miles round trip. While British Airways is in between. BA does have the famous option between Toronto and Dublin that can be had for as little as 26,000 Avios round trip with manageable taxes and fees but in most cases you are looking at more Avios to Europe with much higher fees.

Comparison of spending required for a reward

If we take the base spending on the TD Aeroplan card, which is 1 Aeroplan point per dollar you are looking at $60,000 – $70,000 in spending to get a round trip reward flight to Europe. With the AF KLM card you can get the same reward for $30,000 to $40,000 in spending. And I think that’s where Air France KLM are trying to come in with this card. Add in the up to 30 miles per dollar at select merchant partners of Brim, the 5 miles per dollar on flights versus TD Aeroplan ’s 1.5 on Air Canada flights, WestJet’s 2% on their flights or the RBC British Airways card’s 2 Avios and you can quickly see this card really does compete in the earn and burn arena.

Here you have a card where you can spend $6,000 on flights with Air France KLM and end up with enough miles for a round trip reward flight to Europe. Spend $6,000 on Air Canada flights with the TD Aeroplan card and you roughly have a one way reward flight between Toronto and Montreal. I think you can see where I am getting at here as to where the strength of the Air France KLM card lies.

For business class flights the gaps closes quite a bit, flights on AF KLM start at 70,000 points which is the same as Aeroplan. Here it really depends on each individual’s spending to see which card comes out ahead but again if you are someone who is buying lots of transatlantic flights the Air France KLM earn rate cannot be beat as it will get you to a business class reward much faster than any other card in Canada.

Where the card could do better

What is disappointing on the card is the lack of additional benefits for travelling with Air France KLM. No first checked bag free, no discounts for buying cash tickets, no priority check in or boarding. No companion vouchers. Those are a flurry of benefits that all the direct competition offer in one form or another.

It does have the annual benefit of 30 XP or elite status qualifying points which will help some of the semi to more frequent Air France KLM flying members retain status or get to the next status level.

The card does have Mastercard Travel Pass by DragonPass which covers your annual membership fee to access lounges but you still have to pay the entry fee. There are no free annual passes and more surprisingly no free access to the AF KLM lounges in Toronto or Montreal. Granted having Mastercard Travel Pass on this card is more than you get with the TD Aeroplan Visa Infinite card or the RBC British Airways Visa Infinite card. The only other premium airline cards offering lounge membership are the WestJet World Elite Mastercard and MBNA Alaska Airlines World Elite Mastercard.

Why doesn’t it have No FX Fees?

There also seems to be a lot of disappointment that the card does not come with no Foreign Transactions fees like other Brim Cards. Again, you have to look at who this card is competing against. There is not one Aeroplan credit card or in fact any airline credit card in Canada that comes with no FX Fees. In all honesty these cards don’t need to offer it to compete. They are in a different space altogether. Could Air France KLM and Brim have offered it to differentiate from their competition – sure they could have but why do so when their direct competitors don’t. Plus, I would say the primary target market for these cards are less interested in No FX fees on their cards. Just like the primary non-gamer markets for the Aeroplan, Alaska Airlines, WestJet and other airline cards in the market – people aren’t getting them for no FX fees. In general it is a market that is less price sensitive in terms of saving that 2.5% on foreign transactions.

The lack of welcome bonus miles

You can also tell the card offerings have been created to avoid gamification – hence the welcome bonus of only having XP. AF KLM don’t want the gamers grabbing this card with a large sign up bonus using those miles for one flight with them and then cancelling the card to go back to Air Canada or some other airline. That being said, until Dec 15 you can get the first year free on this card so it is open for anyone to give it a try and the only cost to you is a small short term hit on your credit rating.

The card also serves as an insurance policy for keeping flying Blue miles from expiring. I mean its not necessary for someone who flies frequently enough with AF KLM. However for someone who doesn’t and just happens to transfer points from American Express to Flying Blue for a reward flight and then ends up not booking or having to cancel an award – they can’t convert those points back to American Express. So if plans don’t work out to use those miles within 24 months or somehow your travel habits change where you aren’t flying Air France KLM as frequently you can save those miles and the big investment behind them with this card. So for some of you, you can consider getting this card as an insurance policy for your Flying Blue miles.

The Air France KLM World Elite MasterCard® powered by Brim Financial officially launched today and I feel it will definitely find its niche spot in our market. When I first learned about this card early in July I figured it would maybe have a couple thousand people sign up for it in the first year or two and based on the offering I stand by that. It has definitely been developed for Air France KLM flyers in mind. I do also feel it will make its mark on others who fly transatlantic at least a few times per year thanks to that 5 mile earn rate on Air France KLM flights.

To conclude I will stand by my middle to positive ground thoughts on this card – which is something higher than what I’ve seen most other people say about it. No doubt, the benefits could be better to make flying with Air France KLM even more attractive but when looking at the earn to burn requirements and what the direct competition offers, it is definitely right up there with them.