Rewards Canada had the pleasure of attending the WestJet 787 Reveal event in Calgary yesterday. This was the event and news that were originally planned for the last day of February but delayed for various reasons.  The actual plane isn’t in WestJet’s hands just yet so the event centered around several videos projected onto the hanger door with renderings of what the plane with the new livery will look like and what the offerings will be on the inside of the aircraft. The event was well planned and primarily attended by WestJet employees as well as the media and partners of WestJet.

Here is our video of the event itself:

Now onto the nitty gritty of the new Boeing 787-9 that should be in WestJet’s hands by January of 2019. At that time the plane won’t fly internationally yet as it will need to get ETOPs certification which means it will most likely be making the rounds for several months between cities like Calgary, Vancouver and Toronto. Perfect for those who want to try the product out but may not have any international flights planned in the future. Although not revealed yet one can assume it may do some European routes to begin with and we do know that WestJet is in the regulatory stages of acquiring routes to Japan and China. I wouldn’t be surprised (and this is just a guess) if Western Canada to Paris is one of the early routes seeing that they have flights to the French capital that just started from Halifax thus giving WestJet nearly a year to iron out things on that new city. This guess is also barring any regulatory approvals coming in beforehand for Asian routes.

WestJet’s new 787-9, of which there are 10 on order and 10 more as options will be configured with three classes, Business, Premium Economy and Economy.

Business Class is set with a great 1-2-1 layout and as promised when the planes were ordered they will be lie flat business class seats. Each seat will have an 18″ touch screen entertainment system, touch screen seat controls and the service will be unlike previous WestJet service with turn down service when you are ready to lie flat and sleep. Dining will also be on demand which is huge deviation from WestJet’s current service. The little airline from Calgary is in the big leagues now and it will be interesting to see where it takes them! 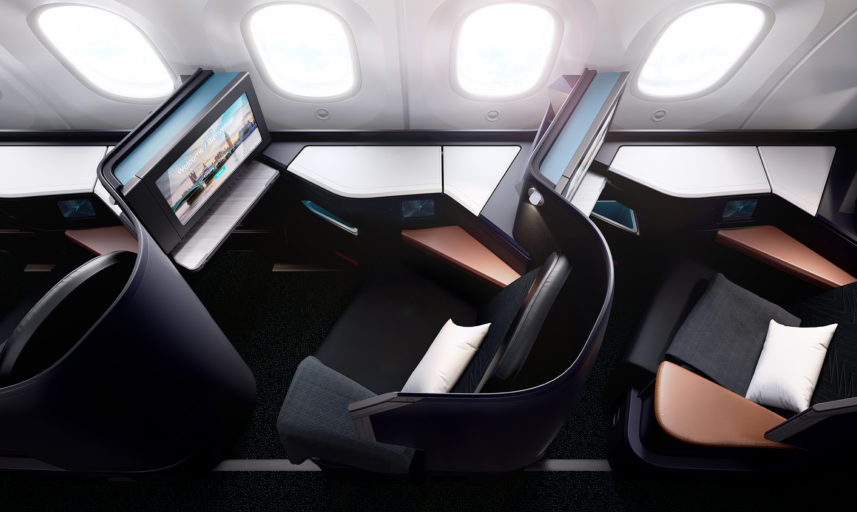 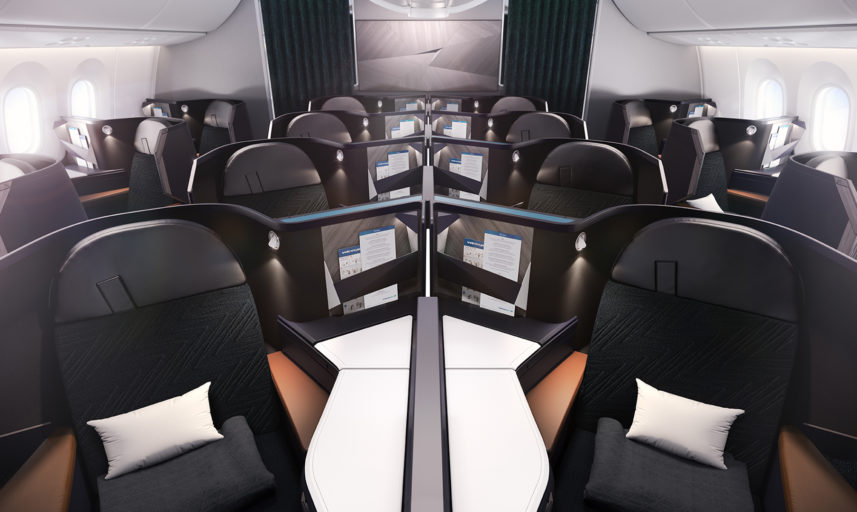 Premium Economy has a 2-3-2 layout and looks similar to older style business class from the pre-pod era. So it looks better than the current Plus product you will find on WestJet’s narrowbody aircraft. Premium Economy will have a 38″ seat pitch, 13″ touch screen entertainment, a self serve social area and enhanced dining options. 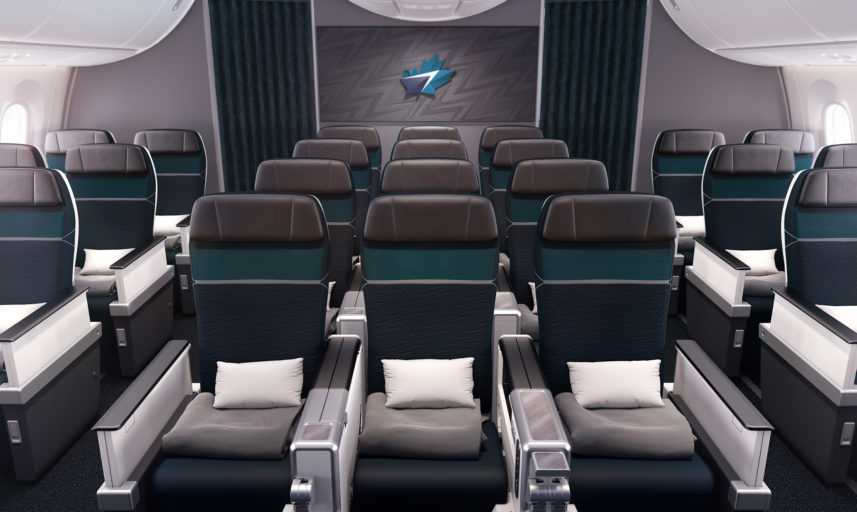 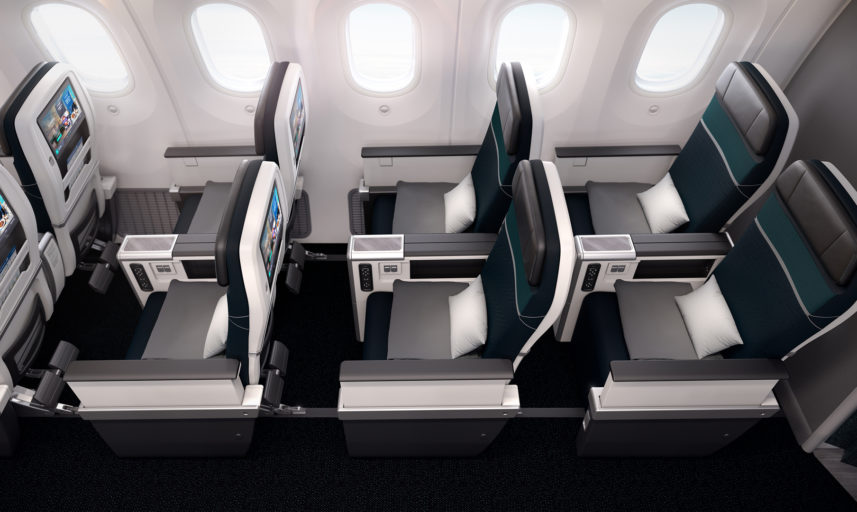 Finally Economy Class will be laid out in a 3-3-3 configuration with personal touch screen entertainment and in-seat power. 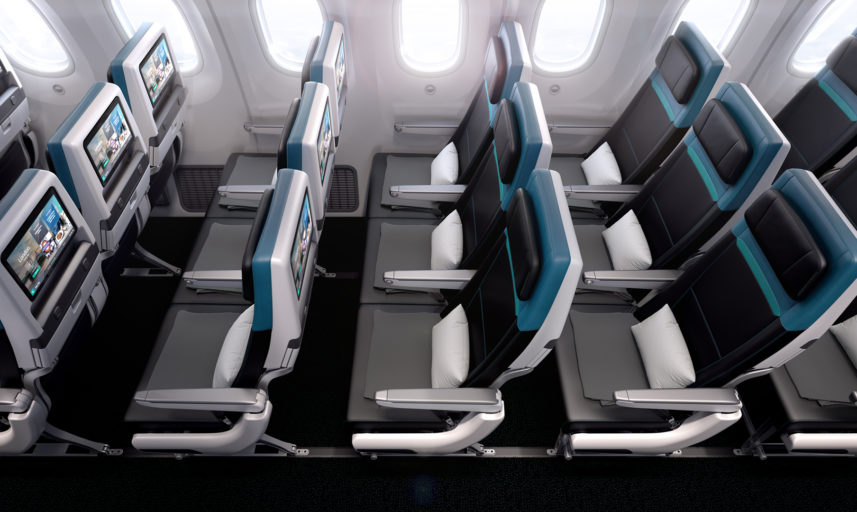 The new livery looks great and we’ll actually see it sooner than next January as WestJet’s newest 737 Max aircraft that will be delivered in the next month or so will be sporting the new look: 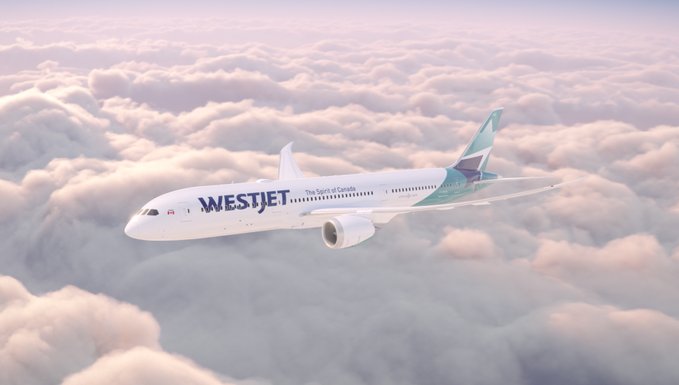 Related: The unveiling of WestJet’s 737 Max 8 with photos and flight video

What else do we know after Tuesday’s event? We learned that companion vouchers from the WestJet RBC World Mastercard WILL NOT have a business class option added to them. At least not at the start. I know that some within WestJet would like to see that option and were working on it but it’s not on the table – at least for now.  However any and all WestJet dollars you earn can be used towards purchasing tickets for any class on the new planes since WestJet dollars work just like cash. No word yet on if there will be Premium Economy or Business Class Member Exclusive Rates. Hopefully in our next meeting with WestJet we can find out more details.

As to the actual 787, flights should go on sale this fall and that is about when we’ll find out what routes the plane will be put on. The good news is that WestJet should be receiving full scale mock ups of the business class seats around that time as well so we’ll report on what they are like in person!

What do you all think of the new plane and livery? Tell us in the comments below!

All photos were sourced from WestJet