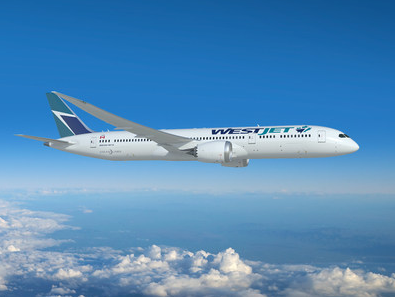 This press release came out early this morning across our desk (4am so I wasn’t at my desk) but super exciting news from WestJet:

CALGARY, May 2, 2017
/CNW/ – WestJet announced today a definitive purchase agreement with
The Boeing Company for up to 20 Boeing 787-9 Dreamliner aircraft. This
agreement includes commitments for 10 Boeing 787-9 aircraft to be
delivered between the first quarter of 2019 and December 2021,
with options for an additional 10 aircraft to be delivered between 2020
and 2024. The airline also announced it has selected General Electric’s
GEnx-1B engine for the 787.

“This order represents an exciting new chapter in WestJet’s history,” said Gregg Saretsky,
WestJet President and CEO. “We have carefully executed on our strategic
plan, first launching WestJet Encore to connect smaller communities
across Canada to our growing network followed by our successful venture into wide-body flying to Hawaii
and London Gatwick. Now, with the most sophisticated commercial
airliner available, we turn our attention to further growing our
international presence and introducing even more travellers to our
award-winning guest experience.”

The
Boeing 787-9 Dreamliner is a state-of-the-art aircraft that is 20 per
cent more fuel efficient than the Boeing 767 aircraft. With a range of
more than 14,000 kilometres, the Dreamliner will give WestJet the
ability to serve new destinations in Asia and South America, and to expand its service offerings into the European market.

This is big news for them, obviously despite some teething issues with their quarter century old 767s the long haul market seems to be working for WestJet. Next up according to the press release will be more European, South American and Asian routes. It looks like WestJet’s route map will grow into resembling one of the airlines they helped knock off, Canadain Airlines!

Seeing that the planes will start to be delivered in under 2 years I wonder if this means WestJet will stick with their current 4 767’s for the time being or if they are still planning on bringing on some of the old birds and then replace them with the 787.

Also we don’t know what configuration WestJet will put in the planes? Will we see a true business class or will they stick with their economy/premium economy mix. If we look at Norwegian who flies the 787-9 out of Europe to the U.S. and other long haul destinations they only do premium economy and economy (35 and 309 seats respectively) so it is entirely possible WestJet will stick with what they know and do something similar to Norwegian.

What are your thoughts on WestJet’s move to acquire the Boeing 787-9 Dreamliner?

Lots of WestJet news for start of the month here on Rewards Canada! Check out the two great offers we posted yesterday: